Lonely Gaven had no alternative than to turn to the sea after an accident ruined his leg.

Now he’s content with his life as a pirate. But when the captain of The Nine Sails, the ship where Gaven works, commits an unspeakable act, Gaven rebels, and is thrown overboard.

Merman Pebble almost loses his life when he’s captured by pirates, but Gaven came to his rescue. When Gaven is left to die, Pebble returns the favour, and saves Gaven’s life by nurturing him back to health.

Soon they fall in love. Will Gaven be able to forsake his life as a pirate and live contentedly with Pebble? Or will their differences keep them apart? 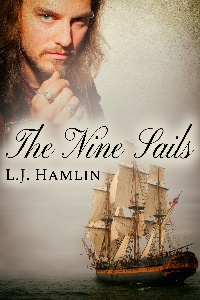 Gaven pulled on the ropes with the others, and he was sweating by the time he got a glimpse of it. The mer was beautiful, dark blue-gray skin all along its almost human back, freckled with dark red spots, and its front was light skin, like a fish belly, and speckled with lighter red splotches. It had long hair as green as the seaweed tangling around its face, and that was when Gaven’s heart sank.

He’d never seen such pain and desperation etched into a being’s face. Even before he saw its eyes, he felt like a monster for being a part of this capture. The mer’s mouth was moving as it yelled out. Its large-scaled tail was trashing in the limited room it had, and Gaven could see the pain in the lines on its eerily beautiful face.

And then the eyes, as pale green as seafoam could be, and wide, so wide with fear. This creature was no mindless killer after them. Gaven was sure of that. It felt pain and fear, and he was sure the mer knew it would die if it reached the deck. The captain planned to butcher it and sell parts to land folk, pull out the slightly sharp teeth for jewelry. Same for the hair and bones. Carvings made of mer bone were very popular and fetched a pretty penny.

Gaven felt nausea take hold of his stomach, bile inching up his throat. He’d stopped pulling on the ropes, but that would not be enough. There were ten other men working the ropes. They’d get their prize if nothing were done, and those eyes that seemed to plead with Gaven would be plucked out and pickled in a jar.

He dropped the rope and drew the dagger at his belt. He yelled out that a royal ship was coming from the West, the royal navy being death to pirates like them. When people started to scramble at his call, dropping ropes, he began cutting others. By the time his call was met with another to say it was false, the net was starting to come open.

“Please, jump out. Do something,” Gaven begged and made eye contact with the mer once more. The creature seemed to understand him or the situation it was in, because it bucked its tail wildly -- nine times -- till it worked its way out of the gap Gaven had made for it. It fell back into the swirling ocean, disappearing under the turbulent surface in an instant.

As he had expected, his actions did not go unnoticed by the other men, and he more than heard the captain give an order. The next thing Gaven felt was his face slammed into the rough deck as he was tackled to the deck. He tried to fight. He wasn’t sure why, only that he’d been born a fighter, and it wasn’t in him to just lay down and take a beating.

Someone trod on his hand and then kicked it to get rid of the dagger he had been holding, and several of his fellow seamen pinned him down roughly. Someone removed the cloth from his ears, and he could hear the roaring of the sea and his captains furious yelling. Gaven didn’t try to answer at first, hoping the captain would yell out some of his anger.

The captain moved closer till his boot tips were in Gaven’s limited range of sight, what with being pinned down face first to the wet wooden deck.

“What on God’s forsaken earth where you thinking?” the captain hissed. He fisted a hand in Gaven’s hair. It was an unruly mane, but not as long as the green hair of the mer, the mer that he’d gotten himself in this position over. A voice whispered to Gaven, “Was it worth it?”

The Ninth Elixir (MM)
Pelaam
In Shelf
$2.99
Tweets by
sirenbookstrand