Tricks can mean many things: sex partners, deceptions, even magic ... or maybe all three.

Arliss is a gorgeous young dancer at Tricks, the hottest club in Chicago’s Boystown. Sean is the classic nerd, out of place in Tricks, but nursing his wounds from a recent breakup. When the two spy each other, magic blooms. 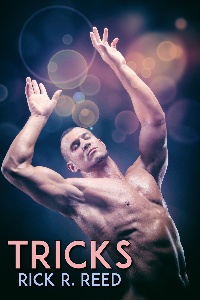 Now it was time for the part Arliss hated the most (and the part he had to reluctantly admit was where he actually made his real money). Yes, boys and boys, it was time for him to “mingle,” to “shake his moneymaker” and pray it didn’t fail him.

With dancing, he could at least go somewhere else, whether it was simply thinking about whether he should buy those jeans he had seen downtown at H&M or remembering a trip to St. Petersburg Beach with his mom when he was a kid. He could allow himself to simply respond to the music, to lose himself in it, turning down the whistles, the “Woofs,” and the whispered come-ons to a dull roar.

But when he had to move along the bar, hustling for tips, he was forced to engage with the customers (as Emmett would have said). He had to make true -- and not fake -- eye contact. He had to listen to whispered propositions in his ear as though he were hearing them for the first time, wearing an intrigued smile as if the whisperer was saying something new and not the same old tired lines he and his coworkers had heard a million times. Can I come backstage with you, man, I mean, you know, come, if you get my drift? What are you up to later, big boy? My boyfriend has nine inches, and we have a penthouse on Lake Shore Drive if you want to come by. I am so fucking alone, I need someone like you. You are the hottest thing I’ve ever seen. Let me show you how I can swallow that dick, take it up my ass, make you feel things you’ve never felt before. I have a Platinum American Express card with your name on it. I have T. I have G. I have X. What time do you get off? I mean, really get off? Arliss would throw back his head and laugh or pretend to actually consider their propositions or even occasionally reach out and stroke a grizzled face, pretending he found it hot while all the while thinking how he couldn’t wait to get back to the dressing room and its sink and disinfectant soap.

But the guys ate it up. And in the six months Arliss had been an official employee of the club, he had yet to run across a man who detected he wasn’t really feeling the image he projected. And when they ate it up, they threw money at him (or creased it and placed it in the crack of his ass or under his balls). Arliss didn’t really like it when they grabbed his dick, fondled his balls, or fingered his ass, but it was all part of a day’s work for him, and he knew if he was going to make serious money, he had to at least pretend to enjoy it. And once he leapt from the bar and moved into the crowd, the gropes got more serious, but often, so did the size of the tips. Arliss knew if he acted his part well, he could walk out with two or three hundred dollars in his pocket, sometimes more, especially on weekend nights.

And that’s what he had to tell himself as he moved down the bar, staring at the faces of these men who jeered, laughed, and never once saw him as a human being, but only as an extension of their lust, their twisted need. Most of them were okay. Middle-aged guys who were probably just lonely and needed the boost they could get from a drink and a smile from a pretty boy. But some of them were downright creepy, like the guy two stools down with the pale blue eyes that were almost colorless, the shock of unkempt gray hair, and the sallow complexion. He sat, expressionless, holding up a folded twenty-dollar bill. The way he held the bill aloft, the boredom on his face, put Arliss in mind of a person holding a treat out for a dog -- a dog he didn’t much care for. Arliss almost wanted to pretend he didn’t see him. There was something creepy and, worse, dead in his weird eyes, but the allure of the cash proved to be too much. He squatted before the creep, who proceeded to crook his finger at him, like Arliss was his servant. Arliss moved closer so he could whisper in his ear. Arliss placed his ear near the guy’s thin lips, expecting to be propositioned, to be told there was a lot more where the twenty came from. It wouldn’t be the first time.

“You’re a worthless piece of shit.” 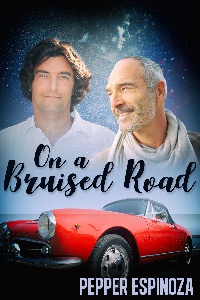 On a Bruised Road (MMM)
Pepper Espinoza
In Shelf
$4.99