Horror. Romance. The two seem at odds, yet in provocative author Rick R. Reed’s hands, the pair merge like a match made in heaven ... or hell.

Among them you’ll find a chilling and redemptive ghost story, a most unusual and shocking first meeting for two lovers, a story revolving around one of the 20th Century’s most horrific serial killers, and a darkly comic take on the vampire mythos. This collection will make your heart race with passion ... in all its forms.

Contains the stories: * Echoes * How I Met My Man * The Man from Milwaukee * Sluggo Snares a Vampire * The Ghost in #9 * Incubus 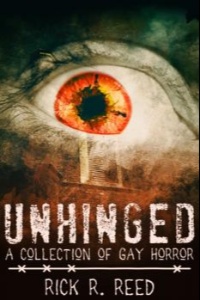 EXCERPT FROM "How I Met My Man"

I worked my finger into a loose edge and tore open the top of the envelope. I was right -- there was a card inside. But it wasn’t a birthday card. At least I don’t think so. I pulled the card out and stared at it.

People always say, in books, things like “a chill ran up his spine” but I’ve always questioned that. While of course I have had occasion to experience fear and even terror in my thirty-two years, I have never actually felt a chill “creep” up my spine, let alone run its “icy fingers” up and down it.

The front of the card was a simple black and white photograph of a long curving black feather on a dark background. Most likely, this was an ostrich plume. So why did something so innocuous give me the creeps? Why was my first thought that this was an image pulled from a nightmare? Maybe because it was just weird. There was nothing printed on the front and the photo -- so simple -- seemed somehow foreboding. If it didn’t sound melodramatic, I’d say it seemed like a warning.

Its starkness was eerie. I fought an urge to just drop the card on the floor and run upstairs, leaving it there for someone else to find. The feather -- pardon me for my flight of fancy -- did indeed look threatening. Don’t ask me why. I imagined that if I did leave it on the floor it would be waiting right outside my apartment next time I opened my door.

The color, the shadows ... I don’t know, they seemed to add up to death.

I know, I know. That sounds over-the-top, but did I mention that it wasn’t until I actually opened the card that I felt that shiver of fear run up my spine? The one that I had hitherto never experienced?

Written on the inside of the card, in the same, feminine hand that the envelope bore were five simple words:

I’ve been inside your house.

It was a simple sentence, almost homespun, but it struck a chord of terror deep within me. It made my heart race. It caused me to look behind me. My hands trembled, just a little bit. And a queasy nausea rose in my gut.

I stared down at the plain sentence. Like the feather, there was something ominous in its simplicity, a veiled threat. Why would someone go to the trouble of sending me a card simply to say they’d been inside my house?

I glanced down at the envelope again, just to make sure my eyes hadn’t deceived me, hoping against hope that this bizarre missive had been stuck in my mailbox by mistake, perhaps it had been intended for one of my many faceless neighbors, for whom a picture of a black feather would conjure up some rapturous memory -- or something like that.

But no. The card was for me. There was no getting around it.

Wearily, I started toward the stairs. Somehow, the odd card and its message had sapped the good mood I had begun my hours off work with, and I knew it would eat at me all evening. Who would send this to me?