Three years ago, Lyle made a mistake that cost him his freedom, and almost his life. Now, sick to death of watching his father love the man that Lyle wanted, Lyle accepts an offer to leave Wolf, WY, behind and see what life in Washington, DC,. can do for him instead.

When Lyle comes across a seductive, attractive stranger with a fascinating yet terrifying view of humanity, he's more than intrigued. It doesn't take Lyle long to realize that Arius isn't just playing games, though, and when Lyle runs across a secret in Arius' lair he has no choice but to flee, even knowing his actions will enrage Arius.

On the run, with only a psychic's second sight and his own instinct to help him, Lyle has nowhere to go but home. The only question is, will they have him when he shows up.

"Well, look what the cat dragged in."

A voice caught Lyle by complete surprise. He could have sworn the park was empty, and he was never wrong about things like that. Not in this form. Though he whipped his head towards the voice quickly, he landed his paws gingerly, one at a time, as though the ground had suddenly become ice underneath him.

A man -- tall, long, and eerily calm, considering he was speaking to a wolf -- stood with one ankle crossed over the other. He leaned against the fountain as though in casual conversation with the angel carved into the marble beside him. Though the man would have had to have waded through the lower basin to get where he was standing, he appeared to be completely dry. His dark slacks and jacket made a sharp contrast against the wind-polished marble, but his skin was white enough to compete with the fountain for luminance.

"Or, should I say, what the dog dragged in?"

Lyle's shoulders dipped, his head dropped, and his tail slipped between his legs. He didn't control any of these movements; his body seemed to do them without any direction whatsoever. When the man straightened and slipped a hand into each pocket, Lyle curled his lip and bared his teeth.

"Relax, mutt," the man said. "I know you're no dog. Just as you, no doubt, know that I'm no man. And if we're having a competition on whose teeth are prettier, I'd be happy to show you mine and win that round in a heartbeat." He shrugged and flicked an eyebrow. "Or lack of heartbeat, as legend has it."

The man stepped forward. Lyle stepped away quickly and the sudden scrabble of his back paws made the man grin. "It's kind of a shame, you know. Here I thought dinner was on its way, and instead I get you. Not that a meal of dog would have been fine dining, mind you, but it would have made my life simpler. Now I'm going to have to find a new place to hunt for the night. Not even the saddest or drunkest sot will wander in here with the two of us around. There will be way, way too much creepy factor weighing on their instincts. I'd be annoyed by that if I wasn't so intrigued by you, my furry friend."

The words the man spoke rumbled inside Lyle's head. While Lyle usually had no trouble deciphering the tone of conversation when he was in shifted form, translating sound into actual sentences could be difficult. His mind registered it, and something in the farthest corners of his brain was able to interpret it and file the meaning away in his memory, but all this took time and concentration. Vaughn was not nearly as skilled in that sense as Lyle was, but then Vaughn hadn't spent as much time in wolf form as Lyle had. Still ... even with all of Lyle's practice and learning, the man's pattern of speech and inflection -- as if every word he spoke was a joke -- was confusing.

"I haven't seen one of you around here in ages." 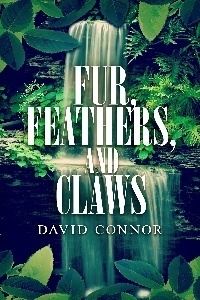