Latex, leather, or lace. Oh, my! Bridles, bondage, and ball-gags. Oh, wow! Puppies and ponies and paddles. Yes, please. May we have some more?

It’s almost Christmas time and everyone is headed to Broad Horizons to celebrate the holidays. You won’t find a jolly fat man in a red suit here, unless that’s what turns you on of course, but you will find everything else your lusty libido desires. Got a naughty sub that needs some special discipline or just feel like checking out the club? Maybe you’d like to buy a membership for that special Domme in your life? If so, then Broad Horizons is the place to be this Christmas Eve. We don’t care if you’ve been good or bad. In fact, we think naughty is nicer, and we know it’s a hell of a lot more fun.

Pretty Tied Up by Beth Wylde: The holidays are here and Dani and Maryanne are back in action at Broad Horizons. Maryanne has offered herself up to her partner, in her first live bondage exhibition, as Dani's Christmas present. When practice doesn't go quite as planned Dani is worried she may have to cancel the show, especially as a last minute equipment problem pops up. Can Dani's sudden brainstorm save the show and eliminate her need to go shopping too? With her woodworking skills, and a few favors people owe her, she might just have Christmas, and Maryanne, pretty tied up.

Completion by Mychael Black: By day, Eli Knight works for Kent Evans’ computer graphics firm. By night, however, he serves an entirely different role: that of Evans’ submissive. The love and respect between them is deep, but Kent knows Eli holds a candle for Mitchell Phelps, Eli’s best friend. When Kent takes Eli to a Christmas party at the BDSM club Broad Horizons, Eli has no idea what to expect from his trangendered Dom. What he discovers -- about them and himself -- is more than he could ever hope for. Now it’s up to the both of them to find out if their love is strong enough to handle a major addition.

Lessons Learned by Sascha Illyvich: After being left at Broad Horizons by an angry master, Wendi meets Summer, an experienced Domme with a surprise. Will Summer's challenge to Wendi help her capture the heart of her beloved Master?

New Tricks by EM Lynley: Skeptical and straight-laced Blake isn't so sure about attending Broad Horizons' Christmas Eve Party. He's never gone in for any of that kink, but he wants to humor Jay as they spend their first Christmas together. Despite his initial aversion, he's powerfully drawn to the scene and eager to experiment. After Jay reveals a hidden secret from his past, he's willing to play, and in the end Jay receives a gift more precious than he ever expected. 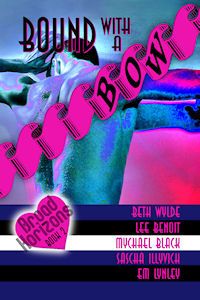 “Ungh!” Maryanne grunted from the force as my singletail hit its target yet again, directly across the luscious twin globes of my lover’s ass. The resulting red stripe had the Domme in me celebrating the gorgeous mark of ownership.


I repeated the motion, catching Maryanne lightly on the back of her right thigh, just below the swell of her rear. She barely moved, but the throaty moan that escaped from between her gagged lips let me know she was still enjoying herself. I smiled and struck once more. This time she stiffened and let loose with a muffled scream. “Mmm, that’s nice. Looks like I found your sweet spot. Want more?”

Her head bobbed enthusiastically, so I pulled back for yet another blow. My shoulder seized up in protest of the repeated movement. I dropped my arm to my side, letting the whip fall to the floor as I worked out the cramp. I figured Maryanne wouldn’t mind a moment of rest, either. Her ass and the backs of her thighs were a delicious cherry red, and I couldn’t help but stare at my lover in fascination. While I massaged out the stiffness, I took a step back to admire my handiwork. The vision was awe inspiring.

“God damn, you look hot. All sweaty and flushed and ready for whatever I want to give you.” At the moment I was so aroused I barely fought back the urge to thrust one hand down between my legs and give myself some relief.

“I could stare at you like this forever. I bet you’d enjoy that.”

Maryanne was completely nude and bound facing away from me, her arms stretched upward and secured in a V above her head. Her legs were positioned and restrained below her in the same fashion. Her backside was on display for anyone who happened to walk by, but since it was Thursday and the club was closed, the chances of that happening were slim to none. The only people that might see us playing were the cleaning crew. After six months of working at Broad Horizons, they were more than used to seeing Maryanne and me playing on the equipment after hours.

“I can’t wait to show you off on stage. The other Dommes are going to be so jealous.” There were no women currently in the building for me to gauge a pre-show reaction from. George was on duty tonight and he was too busy waxing the floors to pay us much attention. Not to mention the fact that he prefers his eye candy to be big, beefy, and male. Maryanne’s big test would come tomorrow night when she performed live, for the first time, in front of an audience. I’d sent out hundreds of emails and posters and other promotional material to advertise the show. I was expecting massive attendance but I kept that tidbit to myself. Maryanne was already nervous enough. No need to add to her anxiety.

As I watched, a bead of sweat rolled down my lover’s back and disappeared into her crack. “Fuck, babe.” I walked closer to examine the sight, running my fingers lightly over her seared flesh. Around her waist was another set of ropes, wrapped twice around her abdomen to hold her in place. They allowed her very little freedom of movement. Some submissives like a bit more room to writhe, but Maryanne prefers her bindings to be as tight as possible. It is a delicate balance we’ve had years to perfect.

“Sometimes I wish I had a real cock so I could just bend you over and fuck you whenever I want to without having to run off and strap one on.”

Maryanne moaned and thrust her ass harder against my palm, as if the idea of being taken from behind at a moment’s notice turned her on as much as it did me. It might well have.

“Tying you up is the closest I’ve ever come to having a religious experience. Seeing you all naked and bound to the cross, shaking and pleading for me to make you cream? It’s almost fucking holy. You’re a true gift from above.”

I slid a hand down between her legs and found the proof of her excitement. “What’s this?”

My question was completely rhetorical, since Maryanne was unable to talk and the answer was dripping from my fingers. I wasn’t sure if she was soaked because of the paddling, the whipping, my naughty talk, or a combination of all three. Probably the latter.

I walked around to the back of the stage so I could look Maryanne directly in the eyes. I almost always leave them uncovered. It’s a pleasure to watch her true emotions flit across her face as she experiences each new device of my choosing. Her genuine reactions are one of my favorite things about our sessions. I’ve never had a submissive that was more responsive to my attentions.

Her blonde bangs were plastered to her forehead with sweat and her teeth dug into the ball gag, but not once had she given her hand signal to stop. Her hands were curled around the top of each arm of the X-frame but her fingers were still. No tapping, which was always her safe sign when gagged.

“Still with me sweetheart?”

Her lips curled upwards against the thick rubber in an odd parody of a smile. To reinforce her answer she nodded briskly. I cracked my knuckles in reply and prepped myself for another round, ignoring my whip in favor of something a little more personal.

A Shot of Jack
JT Whitehall
In Shelf
$0.99
Tweets by
sirenbookstrand