Sobi enjoys the solitude of darting animals to track behaviour and migration. When she heads home for a quick check-in, she is a little perturbed to find that her presence is required for the Anvin dignitary in need of a wife.

She dresses appropriately, and when she faces the man behind the shadows, she recognises the man that she linked herself to years earlier.

Midnight is a silly nickname, but Aloss is willing to let the Protheans call him whatever they like as long as they hand over his mate.

Sobi reloaded and checked her monitor. A slow grin spread across her face when the steady beep began and the dot began to move with the cloud. “Gotcha.”

She laughed and settled on her cycle, kicking the engine into motion on the downhill slope. With a satisfied grin, she returned to the dark dome of the city. The hunters would have easy targets for their hunts later in the day. If they chose to monitor the traffic patterns of the creatures she had tagged, they could do that too. She didn’t care; it was time for a shower and some sleep.

Passing from the blazing light to the relief off the darkness was always a surprise. She flicked up the shaded lenses on her goggles, and her eyes adjusted to the dimness within Shadow City.

Sobi drove through the streets and pulled up outside the tagger station. With a jaunty grin, she swaggered inside and handed over her crossbow and her remaining charges. “Here you go. I tagged nine groups of desert animals.”

She unbuckled her tracking unit. “Here, the tags were all solid sets, so they should still be transmitting.”

Goran was a Prothean, like Sobi. He sighed and shook his head. “We are going to miss you when the call comes.”

Sobi blushed and her stomach went cold at the same time. “It hasn’t happened yet. I am just in the candidate pool.”

Goran’s assistant chipped in from the back of the station. “The commander from the new city arrived today, so you know that he has to be hunting for a wife.”

Goran wrinkled his nose and shrugged in acknowledgement. “That is the rumour. You might be called upon.”

Sobi felt a headache coming on. “I came here first to drop off my weaponry this time. I am guessing that that was a mistake.”

Goran chuckled, checked her signals and transferred her payment to her account. “Thanks for the hard signals. Most have been dropping.”

“The other taggers just don’t want it enough. All right, I need to get a shower and head to dinner. I am starving.”

“Job well done. You earned a few days off before you head out again.” Goran winked an invitation.

“Let me know what my energy level is like tomorrow.”

She hoped he was satisfied with the answer as she slipped out of the tagger base. Back on her bike, she took the short trip to her home and parked the cycle in its pod. Once she had taken care of her treasure, she headed up to her apartment and loosened the straps of her coveralls on the way. She was about to unzip her suit as the doors opened to her quarters, but there was a stranger standing in the middle of her living room.

The man turned, and he was obviously not Prothean. He looked her over from head to toe and didn’t say a word.

“Anvin emissaries don’t often break into my quarters. What are you doing here?”

“I am. Tagger extraordinary.” She smiled.

“Your presence is requested at the main hall this evening to meet the Midnight. You are his best match. 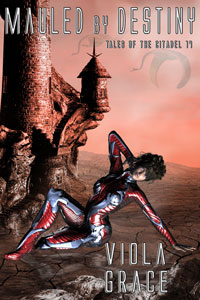 Hyde and Seek
Viola Grace
In Shelf
$3.99
Tweets by
sirenbookstrand