The cougar of all cougars, Sally was the envy of her circle of friends when she married a gorgeous man nearly twenty years her junior. Clint knew that Sally was one hot woman, but he had no idea just how hot. He also knew about the wild parties she loved to throw. After all, they had met at one of her parties. When Sally introduces her young husband to one of her cougar friends and her young new husband, Clint soon realizes that he has entered a whole new level of wild. Cougar taming may be dangerous to his health. 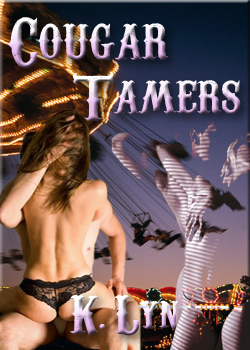 No husband had it better than Sally’s. Clint was twenty-nine and he worked out three times a week just to keep in shape for Sally’s wild sexual demands. Sally, on the other hand, seemed to be born fit. Her body was perfect and she definitely was not afraid to flaunt it. She wore tight fitting tops that showed off her abundant cleavage, and she was no stranger to fitted pants and leggings that showed off her well toned legs. Her blonde hair had none of the pesky gray strands that her friends now noticed on their own heads, and her blue eyes were just as bright as they had been when she was a young girl.

Clint opened the front door and rushed her inside. “Hurry, they will be here any minute,” he said, as he led her down the hallway to their bedroom. He stopped at the doorway and kissed her passionately, lifting her off the floor. Sally giggled like a young girl whenever he did this. She kissed him on the top of his head before she hid on the opposite side of the bed so that she could hear everything. Clint left her alone and waited at the front door. Sally waited anxiously as she sat on the floor in the bedroom between the bed and the wall. She wished they would hurry. The longer she waited, the hornier she got. She reached between her thighs and hiked up her skirt.

Then she heard the voices. It was Clint along with the couple they had met a week ago. They had known as soon as they had met them that the cougar and her young husband would be the perfect new couple for them to invite over. Sally’s heart was beating faster than ever before, but that was what made these afternoon sex invites so hot. She peeked around the foot of the bed and saw Clint with his pants undone already.