Diane Bowman, a dork who blossomed in college, unexpectantly runs into her high school football dream hunks, Trace Turner and Jack DeMarco, at a fantasy resort. Neither man recognizes the beauty, but Diana knows once they figure out who she is, they’ll reject her. To avoid a repeat of that humiliating time, she struggles not to get excited by their incredible stimulation. Trace is totally enchanted by Diana’s exciting rock climbing lifestyle and believes she’s his dream woman. Too bad she wants nothing to do with him. Being rich, Trace’s best buddy, Jack, has led a charmed life. When he, too, falls for Diana, he knows she’d never go for a guy who’s spent the last few years of his life traipsing around Africa and working at a resort designed for sexual stimulation. How can both men motivate her to take a chance on a future together?

4 STARS: "DECEPTION FANTASY is fourth in the Fantasy Resort series and I can tell you, you don't need to read the other three before reading this. Diane Bowman runs into the old high school football gods, Trace Turner and Jack Marco, while she's visiting a fantasy resort. The men don't know the woman coming apart under their expert hands is in face the dorky intelligent girl they both remember back in high school. While on the resort, Diane, Trace and Jack each share a passionate affair that will stay with them after she leaves. Not happy without her two men, Diane must learn to accept the love of these two men. Overall, I thought the characters were really well written and the struggle for all three believable. The sex was scorching and the romance good. I enjoyed the concept of the Fantasy resort and it would be interested to see other books based on this theme." -- Sam Crescent, The Romance Reviews 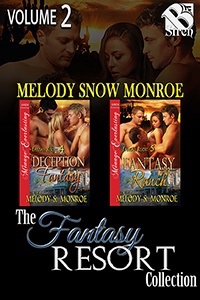 Trace rolled her over and pulled Diana up to her elbows and knees. “You weren’t supposed to come. If you came ten times, we’ll have to punish you ten times longer than we planned. Jack, get out the whip.”

“This is only for a last resort, darlin’. Trace?”

The first slap stung. No womanly hits for them. Jack got in the fray, too. They alternated for what seemed like a full minute. The heat turned from pain to passion, and soon her clit throbbed so much, she was sure she was dripping pussy juice on the bed.

She rolled over. “Uncle. You know, where I say you have to stop. I have to fuck you right now or I’ll lose my mind. You could ask me for my money, my life, anything, and I’d agree to it.”

Jack chuckled. “Now that’s what I’m talking about. I’ll fuck your bottom until you scream. Trace can be the front man, then we’ll switch.”

“I want to make love to both of you at the same time.”

Jack grinned. “Are you saying you want me to be in your puckered hole while you’re fucking Trace?”

The idea of it was so forbidden that her pussy got wet thinking about it. “Yes.”

“Well, I happen to have some lube with me.” He grinned. “I’ve been wanting to wedge into that tight little ring ever since we were in the tent.”

Her chest caved as her breath whooshed out. “Me too.”

“We’re going to take our time with you to make this the most amazing experience for all of us.”

Her dry mouth couldn’t even form the words. She merely nodded.

Jack planted his hands on her hips and squeezed. “You know you changed my life, darlin’.”

Her heart nearly stopped. She wanted to ask him how, but now was so not the time for discussion. His palms slid down her bottom, and he nudged her knees wider, forcing her to scoot lower. The scraping of metal on glass alerted her to a jar opening. Jack smeared cool, thick lube on her puckered anus, slowly working in a finger.

“Oh.” She wiggled her butt to help ease the penetration.

“Easy, there.” Jack withdrew his finger, then pressed it in again, clearly wanting to smooth the way for his large cock.

Trace cupped her face, and she refocused her attention on him. “You’ve got to relax and trust us. Jack’s going to get you ready from behind while I get your delicious pussy all hot and bothered.” He lifted her shoulders until she was kneeling in front of him, her lips inches from his.

He trailed kisses down her throat, and her body went limp from the joy of having him take such care. She jumped when Jack eased in a second finger between her cheeks and stroked her.

“That’s it. Feel the pressure and embrace it.”

“Intimacy is the cornerstone to loving. Be patient.” As his two fingers continued to massage her, he lifted her hair off her back and kissed her neck.

The caresses made her moan, and his gentle touch helped relax her muscles. “I like that.” Okay, she more than liked that, but the words were too hard to form.

Seemingly encouraged by her comment, Jack dragged a tongue under her ear, right over her sensitive spot, and she pressed her bottom downward to take in more of his exploring fingers.

Trace also continued his sensual assault. He slanted his lips over hers and devoured her mouth. After what seemed too short a time, he moved his lips down her throat and over to one breast. She sucked in a breath. The tips were extrasensitive after they’d put those clips on her. He sucked harder, causing sparks of need to course through her.

“You need to be careful there, Diana. You don’t need me to explode before you’re ready.”

He called her by her name. She wasn’t just a darlin’ or a sugar to him. That meant more to her than anything. “I’m ready.” Boy, was she ever. Her pussy was mega-wet and pulsating with every suck of his lips.

Jack must have noticed her preoccupation with what Jack was doing. He ran his hand over her head, and then along the side of her face, cupping her chin. “I want this to be perfect. I want you to want me.”

The desperation in his voice tore at her. “I do want you. I love you both.”

Trace moved to the other breast and dipped a finger between her legs. The nerve endings fired in her whole body. “I don’t know how long I can last.”

“You sure you’re ready?”

Trace lay on the bed and pulled her on top of him, his rigid cock between them. He ran his hands down her back and squeezed her rear end. Kneading the flesh, he opened her wide.

He didn’t have to ask twice. Diana lifted up and grabbed his cock. She gave a few pumps just to see his breath catch and to connect with him on a different level.

“I told you before, you’re playing with fire there.”

“I know.” A laugh bubbled up at the love in his eyes.

She opened wide and slid down on him. Her eager channel was slick with her juices, but when he lifted his hips, his cock seemed to expand. He gently rubbed her hips, but from the pressure of his hands, he wanted her to stay put.

“Lean forward on your elbows so Jack can have you too.” With that, he pressed upward, tilting her into position.

At the same time she pressed her chest close to Trace’s and widened her legs. “I want you, Jack.”

“You have no idea how long I’ve waited to hear those words.”