Dinner and a Movie

There’s only one dish on Liam’s menu tonight—Miss Bernie Watkins. After devouring the entrée, he dismisses the dessert cart in favor of snacking on her delectable generous curves at the local movie theatre. Stunned by Liam’s displays of passion, Miss Bernie discovers her inner wanton and beauty. 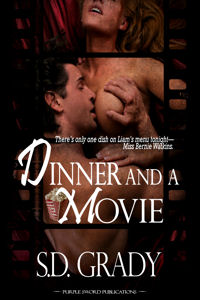 Dinner and a Movie

"...This is a short read which comes in at under 44 pages. This doesn't mean that the quality of book suffers because this is one seriously hot little number :) The set up for the encounter was unusual (I've never read a book where attraction flared up through car mirrors) but, as with all erotic shorts, you need to leave your scepticism at the cover. The sex starts pretty much immediately after they meet and it is very well written. The scenes at the dinner table were FANTASTIC; sneaky under the table fumbling, filled with sweaty panting and suppressed moans in full view of the other diners....*fans* I loved the slightly dominant edge to Liam during these scenes, as he seemed to revel in the control of Bernie's pleasure. The after-dinner movie was kinky, and a tiny bit seedy, and I loved the whole exhibitionism slant to it :D I really don't want to say much more for fear of taking any enjoyment away from the story!"
-Nix, Scorching Book Reviews

Her eyes closed in bliss as he traced her lips. “You have a soft heart, Miss Bernie.”

Small bursts of joy rippled through her body in response to his compliment. But the use of ‘Miss Bernie’ created new urgent responses deep within. She purred and arced into him. Her demon murmured into his ear, “Say that again, Mr. Clarke.”

She pulled back just enough. Heat and moisture collected in the wisp of space between their mouths. A spark leapt across the void.

His mouth took hers, hard. His tongue surged past her teeth and ferreted out every crevice of moisture remaining in her mouth. The light from the wall sconce dimmed. The sounds of silverware and glass vanished, leaving only his pulse pounding against hers. Her limbs weakened. Her entire world tilted.

Anything. She would do anything for this man. His touch. His voice.

“What do you want?” she asked. Whatever the answer, she would give it.

Liam groaned, placed his hands by her head and seemed to struggle to push away from her thrumming body.

An antique clock in the foyer ticked, the tock grew louder with each moment that he watched her. Invisible strings pulled her forward. It would only take a moment to loosen his tie, unbutton the top and expose the triangle of flesh—the bit that beckoned her tongue. She would lick it and leave it wet and wanting….

He chuckled, a sound that reverberated between them. “At first I just wanted your car. And then your legs…” Long fingers kneaded the back of her thighs. “When you bent over to get something from your car, it killed me.”

He drew her into another kiss, brutal and short.

“I want your body splayed open, waiting for me to take my pleasure. Are you wearing anything under this skirt?”

Bernie’s eyes rolled back in her head as she tried to think. “God, I wish I wasn’t.”

“What is it?” His voice lowered with desire.“A thong.” She ran her fingers through the short locks at the back of his head. “And it is soaking.”