Tamara O’Reilly is a descendent of witches, but her only desire is to live a life free of magic. She is reluctant to have faith in her powers even after her touch turns a golden statue into a human.

Prince Mael Drago, son of a dragon and a mage, has spent centuries locked in the form of a dragon statue. After Tamara breaks the spell, he is eager to end the war with his evil father.

Together, with love and magic, Tamara and Prince Mael usher in a new age of dragons. 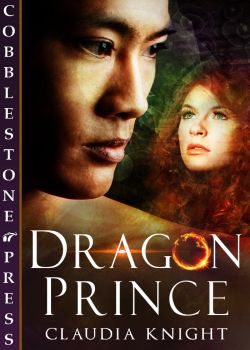 Tamara O’Reilly had looked forward to this trip for months.

It wasn’t often that a waitress got to do something as hugely exciting as visit China. Yet here she was! If only she hadn’t done something as stupid as lose her entire tour group…

She continued wandering through the mostly empty rooms of the Qiang Castle. Something about the description of this castle, built around 111 B.C., had prompted her to choose this tour over any other.

Located on the side of a mountain highway that linked Chengdu, the capital of Sichuan, with Jiuzhaigou, a famous natural resort, the castle was amazingly well preserved—and still inhabited by indigenous people. The tour guide had spoken of the eight gates and how they aligned with the eight diagrams used in divination in ancient times. He had even alluded that the Western disconnection with the ancient ways explained why modern buildings were incapable of lasting as long.

The sound of rushing water could be heard every now and again through the walls, though no water was in sight from the windows. There was something both soothing and alarming about that. The guide had explained that it came from an underground water circulation system.

Tamara admired the ingenuity of the complicated paths through the buildings. She understood how they would have helped against an enemy. However, she wished someone had thought to pen a map for the poor tourists. She wasn’t an enemy, but she sure was confused.

She paused at the doorway of the room she was about to enter. It was full of objects in glass display cases and those ridiculous ropes that didn’t really do anything to keep tourists out.

She felt that little voice warning her not to enter, but she ignored it like she usually did. Cool, clear logic indicated this was a room worthy of exploration. In her world, logic always beat instinct.

Scarlet banners and ancient weapons were propped along the perimeter of the room. She sensed the age of the items, noticing the scratches that proved the weapons had been used in battle. She was disappointed that the banners and signs were in a language she had no hope of reading.

The other items in the room were arranged in a succession of smaller circles. The first had armor of different shapes and sizes. Some were in good repair while others seemed battered. The next circle contained glass cases with what seemed like jewelry—armbands, neckbands and even a dagger that seemed too ornamental to be functional.

Squarely in the center of the room was a large, golden dragon. It was a little over six feet tall and stood on a short pedestal. Its face was decorated with vicious teeth, long eyelashes, and round eyes seemed to be fastened directly on her. Long locks of hair framed its face, and its long serpentine body was carved in detail with scales and wickedly sharp claws. Despite being a mythical creature, it seemed very lifelike.

Tamara was mesmerized. She’d seen quite a few monuments and statues on her tour, but this one was different.

The strangely nagging feeling that she should be far away from here had strengthened as she got closer to the statue. Now, however, as she met the dragon’s eyes, her inner voice fell silent.

“The jewelry,” spoke a new and more resonant voice in her head. “I need it.”

She blinked slowly up at the statue. Everything seemed a little distant and hazy.

Without knowing how she got there, she found herself in front of a case. Her eyes were on a jeweled armband. She lifted the glass cover off the case and took it out.

Only a distant corner of her brain registered the beeping alarm that followed her action.

She admired the way light glinted off the gems. She quickly collected the rest of the jewelry as well as the jeweled dagger. Then she found herself suddenly in front of the statue again.

The compulsion on her was strange. It wasn’t that she had no will of her own. It was more that she felt as though she wanted to do whatever the dragon wanted of her.

She placed the dagger in one sharp claw and the armband on the opposing arm. The two large cuffs went on its legs. Then she reached up to lock the necklace in place.

She paused, chest to chest with the dragon, her arms around its neck…and felt the stone turn warm and supple. The first unmistakable heartbeat that resonated through its chest and into hers caused her to stumble backward.

The golden dragon glowed, its edges so bright that it made her squint.

Suddenly, the statue morphed into a human. One minute there was a dragon; the next, an unconscious man. She had only a second to notice the perfection of his features before he slumped forward.

Instinctively, she stepped closer to catch him. She didn’t consider herself weak by any means, but she was surprised by his weight. She almost dropped him. Rather, his heaviness almost caused both of them to fall.

Not the brightest idea she’d ever had. Then again, today seemed to have been full of not-so-bright ideas. If she hadn’t tried to respond in the local language, she wouldn’t have upset the tour guide. Then she wouldn’t have felt it necessary to buy him a drink, which she would not have then spilled all over him. Then she might have been paying attention to where they were going instead of looking down at her feet in mortification and winding up lost.

The sirens finally penetrated her consciousness. She glanced at the empty cases and wondered just what the hell had come over her.

“Not as much trouble as you’ll be in if you don’t get out of here,” said a voice from behind her.

She tried to turn to see who had spoken, but the body in her arms made that impossible. All she could tell was that the speaker was male and probably British.

He moved so he was in her line of sight. He was a short, old man, wearing a dapper white suit and a white hat. He had on the type of round-rimmed wire spectacles that she had always found endearing. He even carried a cane.

“I’d like to go, really I would. There’s just the small matter of this guy I’m holding.” She couldn’t help the sarcasm that snuck into her voice.

“Hmm, quite. That just won’t do,” the man said, shaking his head and looking around. He pointed his cane at something over her shoulder. “That should do the trick.” He disappeared from her line of vision again and came around on the other side, pushing a wheelchair.

Where did that come from? She wondered whether she was losing her mind.

He positioned the wheelchair behind the man in her arms, and she unceremoniously let him fall into it. As she fixed his arms and legs as best she could, she sneaked a few looks at him. He’s perfectly gorgeous!

The old gentleman stood nearby, tapping his cane impatiently. “You’ll have quite enough time to gape at him when his is conscious and awake. The two of you will be spending quite a lot of time together.”

She quickly started backing up. “Look, I’m really not sure what is going on here,” she said. “But surely, if I explain what happened, someone will understand. Rushing off may not be the best thing to do. And I really should be getting back to my tour group…” Her voice trailed away at the openly pitying look the old man gave her.

“My dear miss,” he said. “Let me make this very simple for you. This young man and I are leaving. When that happens, you will be left in a room with quite a few very valuable and suddenly missing artifacts. Your prints are all over those cases, and the security cameras in the corridor will show that you were the only person inside. Would you like me to explain the Chinese detention system? Do you know how large their cells are?”

Her face paled, but her eyes narrowed. “You’re here. How did you enter?”

“If you are to leave with me, I will show you. Decide quickly. You are wasting precious time.”

She looked from him to the doorway and back to the empty pedestal and cases. She didn’t have much of a choice. “I’ll come with you.” Her voice was a soft murmur.

The gentleman gestured for her to follow with the wheelchair as he approached one of the walls. He tapped his cane in a random pattern on the blocks, and a stone door slid silently open.

One long, dark, and winding ramp later, they were exiting though a wall in the outskirts of the castle. A black stretch limo was waiting, and it took them deep into the countryside.