Heat Rating: Sextreme
Word Count: 24,135
41 Ratings (4.5)
Contemporary Menage a Trois/Quatre
[Siren Ménage Everlasting: Erotic Ménage a Trois Romance, M/F/M, light spanking, HEA]
Suzette Warner is a social worker dealing mostly with domestic violence. She heeds caution when it comes to men. Her sister died at the hands of an abusive cop, leaving Suzette and her aunt Marilyn to raise her two babies. When Suzette meets Miles and Nikko, she resists the attraction because they represent everything she fears. They are intimidating, commanding SWAT members with big attitudes that match their big muscles. She likes them, can feel the sexual attraction, but she’s allowing the past, her job, and  the violence that surrounds her on a daily basis to make the decision to resist them.
Miles and Nikko Powers have found the perfect woman for them, but she’s not receiving to their advances. When she’s caught in the middle of a hostage situation, they realize how much they love her and wonder if they’ve lost the chance to tell her. She could die at the hands of a batterer. Something that happened to their own sister, that changed them forever.

Note: This for-sale version has been revised and expanded and is at 24,135 words. The original short version at 20,771 words is available for free only inside the BookStrand App. 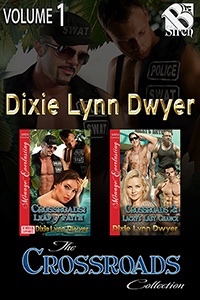 “My God, who hurt you? Who made you so pessimistic and untrusting?” Miles asked her.

She opened her mouth to speak, and nothing came out. Then she swallowed hard again.

“I’m uncomfortable with this.”

“With what? We’re gentlemen. We haven’t done anything to make you feel otherwise. Have we?” Nikko asked. She looked at him and then back at Miles.

“That. What you just said. You both keep saying ‘we,’” she stated firmly.

“That’s because we come as a package. We both want to get to know you,” Miles told her.

“Are you afraid of that type of relationship?” Nikko asked.

“No. I know a lot of people who have open relationships.”

“We don’t do open relationships. It’s called ménage. Two men sharing one woman. Caring for her, doting on her,” Miles whispered as he stroked his thumb against the small bit of skin under her tank top and blouse.

She was breathing a bit heavier.

“You mean in the bedroom?”

“Everywhere,” Miles whispered and pulled her a little closer. She had to place her hands on his shoulders so that she wouldn’t lose her balance. The moment her hands pressed against him, she felt the rock-solid muscles beneath the T-shirt. She was instantly attracted to him. To both of them. Her mind jumped into fast-forward, and she could only imagine what he looked like without the shirt.

He held her by her hips as he scooted closer. Nikko stood right behind her.

“Don’t be afraid. Go out on a date with us, and see where it leads,” Nikko said and then smiled softly.

“I’m very busy right now. I have to meet someone tomorrow. I really don’t have time for relationships and dating. Maybe we can talk more on the boats next weekend?”

“A whole week without seeing you or talking to you? No can do, baby,” Miles told her. She shook her head and kind of chuckled at his words.

“Maybe we can meet for coffee during the week or even lunch?” Nikko suggested.

“Can you give us your cell number?”

“I guess so. I’d better go help my aunt. Today was supposed to be her semirelaxing day.”

Miles let her step out of his hold, and she immediately felt the loss.

“Okay, sweetness, what’s your number?” Nikko asked as he held out his cell phone, ready to type in the number.

“I must be losing my mind,” she said and then rattled off the number.

Miles smiled. “You won’t regret this. We guarantee it.”

Miles watched Suzette as she took off her sandals and got right down into the sand with her niece and nephew. She was sophisticated, yet down to earth. A few times as he watched her, and listened to her talk, he almost felt out of his league, and like he wasn’t good enough. But then she would smile at him, engage him, or pull him into the conversation and it eased that negative thought. It was crazy, but he never analyzed someone, including himself so much, ever. Here he was thinking about his life. He was thirty two years old, hadn’t even come close to settling down, and his job was pretty damn dangerous.

But, for some strange reason, as he watched Suzette caring for her sister’s kids, and playing in the sand with them despite her nice clothing, he started thinking about having more. Like a wife, his own children to love, care for and raise, and sharing Suzette with his brother Nikko.

His chest tightened immediately. They were bachelors, could get most any woman they wanted even though they weren’t players. But suddenly, after just meeting Suzette, he wanted all the things he never ever gave even the littlest of thought to. And boy, did that scare the crap out of him.

Suzette moaned aloud at the way Nikko attacked her cunt. She held onto Miles’s head as he licked and nipped her breasts until the need to kiss him overwhelmed her.

“Miles.” She raised her voice, and he released her breast and tilted his head up toward her.

“Oh!” she moaned again as Nikko added fingers to her cunt and alternated tongue and digit.

“I want you,” she said in a shaky voice and then pulled him by his head and hair until his lips touched hers.

Everything about these two men aroused her. The feel of his hard muscular cheeks beneath her soft palms, the width and girth of Nikko’s shoulders as her thighs hung up and over them while he ate at her cunt. Everything about them, their bulk, their confidence and superiority, was so incredibly arousing she felt the tiny spasms from her gut to her pussy.

She never felt so alive, so sexy and wild. She wondered how she looked right now to them, spread out over the island in her kitchen, skirt up to her waist, topless and ready for cock.

When Nikko removed his fingers, she wanted to complain as she released Miles’s lips.

“Bedroom. Now,” Nikko commanded firmly before she could make her demands known.

Before she could digest his tone and the hunger in his eyes, Miles was lifting her up and pulling her into his arms. She straddled his waist and laid her head on his shoulder, absorbing his cologne, the scent of soap, and the feel of muscles as he headed toward her bedroom. She licked and kissed his skin, sucked at the flesh as she moved her pussy up and down against his belly muscles. She wanted them both naked like her. Now.

Behind her, Nikko caressed her ass under her skirt and let his fingers tease her cunt.

She lifted up, feeling so needy she would ride his fingers if he thrust them up into her right now. She felt aroused, sexy, confident, and in such need of these two men it was nearly frightening.

She pulled back as Miles stopped and looked around her bedroom.

She went as far as lighting some candles, dimming the lights, and spraying her favorite perfume around the room.

Maybe it was to convince herself that this was okay. Wanting for two men she only just met recently to fuck her at the same time. A ménage? She was out of her fucking mind.

Nikko caressed her hair as he inhaled.

“I love how you smell. The scent in this room, and the candles. Everything, baby.” She smiled and then looked at Miles.

He kissed her forehead and then her nose.

“Tonight you become our woman.”

Nikko undressed and lay on the bed as Miles set Suzette’s feet down onto the rug and kissed her while he pushed her skirt the rest of the way off her. He explored her body with the palms of his hands as he used his tongue to explore her mouth. She was moaning and grabbing at him until he released her lips. Barefoot, naked, breasts full and aroused, she looked like a little angel.

“You’re so beautiful,” he whispered, then twirled one of her long, brown locks with his finger and released it, watching it bounce back up and against her breast.

She placed her hands on his hips and looked his chest over. He felt it to his core, to his heart, and knew after tonight that he would never be the same man again.

“I want to taste you,” she whispered, her voice quivering. The moment Nikko touched her from behind, she tightened up.

“Easy, baby. It’s just the three of us. You, me, and Nikko, making love, fulfilling this hunger we’re all feeling inside.”

She gently kissed Miles’s chest and then around his ribs to his belly. “I never did anything like this before. I feel so out of control and scared, uncertain that this could be a huge mistake. But I want both of you. I need both of you so much that it’s killing me inside.”

Miles ran his fingers through her hair as her warm breath collided against his skin, making his cock spring up and against her.

She stopped a moment and tilted her head up toward him.

Nikko continued to caress her back and then her ass as he sat on the edge of the bed behind her.

“We have all night, baby. All night to explore and to possess one another. Your lips feel incredible. I want to feel your mouth on me everywhere.”

“I want that, too,” she said and then licked her lips as he gently guided her head and hair lower. She understood what he wanted, and when her lips touched the tip of his cock, he felt immediately ready to explode.

“Holy fuck,” he growled out, gripping the sheets then reaching for her, slowly pressing his cock between her wet lips. Her nails dug into his hips and ass as she took his cock deeper into her soft, little, wet mouth.

As she pulled back, preparing to begin to suck him in and out of her mouth, Nikko did something behind her.

She gasped, squeezed him on the ass, and sucked more of Miles into her mouth.

Hunters of the Gods 3: Pride of a Princess (MFMM)
Dixie Lynn Dwyer
$0.99
Less than 3 days left
Tweets by
sirenbookstrand