A man with a dark side, in love with a woman who, with along with her own worries, barely tolerates him, are thrown together to perform the impossible task of dealing with the evil and immortal Black Dragon, their only ally a Siamese cat. A puny trio facing impossible odds. Especially when the man's dark side manifests itself and turns him into a danger to his own allies. Their other adversary, a witch, who is on the dragon's side, adds another complication to an already seemingly hopeless task. How can this man control his dark side, convince the woman to love him and seal the dragon's fate? 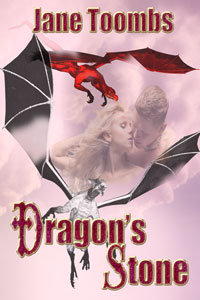 After a troubled night in early December, Ellis Atkins sat on the edge of his bed, brooding. He was back home in New York and should be relaxed. He had been for a time, but no more.

He ran a hand through his hair—red, like his father's. He didn't mind the color, what troubled him was what else he might have inherited from this man he had never known. He didn't carry his father's name. When his mother left his father, Ellis was only three and not even a vague impression of him remained. She'd had Ellis's last name and hers legally changed to her maiden name.

"The Askane name is cursed," she'd told him when he was old enough to ask questions about his father. "He has a dark heritage. That's all you need to know about him. Think of yourself as an Atkins."

She'd refused to tell him any more then or later, though she was open about his maternal ancestry. Her voice had been proud when she said, "The Atkins line carries dragon's blood you know." He soon discovered she didn't seem to be sure exactly what that meant.

His trip to Michigan two years ago had revealed what it meant to have dragon's blood in one's heritage. Except he was the wrong shape to ever shift into one, plus whatever made the Askane name cursed might have prevented a change anyway.

But something was definitely wrong with him. Not anything a doctor could fix. His dreams had turned dark. Threatening, with a sense of imminent doom.

He'd gotten so he hated to go to sleep. Ellis Atkins? No, he was also an Askane. After his mother died, Ellis had searched her belongings for any hint of his father's family and found nothing. He'd Googled that last name and found a tiny village up in the Adirondacks named Askaneville. He'd done nothing about it then. Now he needed to go there, needed to learn what else he may have inherited from his father. The good weather was predicted to hold for the week—no snow coming—so why not now? He rose and headed for the shower.

The village itself, he found, was little more than a ghost town. The few families still there, once they heard he wanted information about the Askanes, refused to talk to him. The last one had cursed and said, "Dead, thank the Lord, the rotten lot of them, and good riddance."

So Ellis tried the cemetery.

After much searching, he finally found the Askane vault over in an untended corner, surrounded by an iron fence. Iron letters arched over the gate spelled out We who will not be conquered, sending a chill through him.

When he tried the gate, he found it locked. As he stared at the gray granite vault inside the fence, which presumably held the remains of his father and the rest of his ancestors, the hair rose on his nape. Someone was watching him.

He glanced around. No one in sight. The watcher remained unseen, but Ellis now was sure whatever it was, wasn't outside but within the gate. And not necessarily alive and human. Worse, he had the distinct impression it wanted something from him. What?

Fearing he might hear an answer, he turned and walked rapidly away. Only pride kept him from running. He had planned to spend the night in town, but once he reached his car, he hightailed it for home. All the way back he tried to tell himself it had been imagination, no more, but failed. What he'd undergone in Michigan two years ago had shown him the inexplicable did exist. And some of it was damn dangerous. If he'd remained in that cemetery any longer he might have found out. But he knew deep down whatever the answer was, he hadn't wanted to hear it. Ever.

He reached home close to midnight and found a message on his answering machine from his cousin David Griffid. "Urgent. Call me as soon as you can."

The tension in David's voice came through clearly. So Ellis called him immediately.

"I have to take Tima downstate," David told him, "and one of us needs to be up here. I called my sister, but the message on Gwen's phone says she's on a week's vacation, so you're it. How soon can you get here?"

"Depends on how soon I can get a flight into Detroit and catch another to the Upper Peninsula," Ellis said. "What's wrong?"

"The local doc says Tima needs to be in the University Hospital in Ann Arbor if we expect to save this baby. We're catching a flight tomorrow morning and taking Kam with us. We've arranged for friends to stay at the farm and take care of the animals, but we need one of us who knows what's down in the mine to watch what's happening. Vran and Mona are back in Wales for the winter. So there's only you and Gwen."

Ellis's heart sank. "The mine? Don't tell me, the wards are failing again."

"'Fraid so. Kam sensed it first, but both Tima and I feel the seep of evil now. I've been checking Enid's house and keeping it warm so the pipes don't freeze. No problem for you to stay there. Once I know you're coming, I'll put Nala over there with enough food, water and a litter box so she'll be okay."

"That Siamese cat hates me."

"Kam says you will need her, and Kam's never wrong. Rent a snowmobile in Ojibway to get out to Enid's, we've got a lot of the white stuff."

Ellis had no choice but to agree, then make travel plans. If Gwen was temporarily unavailable, then he was the only one who understood the problem. But he'd bet she had no more idea than he of what they could do to stop the evil. Both he and Gwen had dragon blood, but she was a female so couldn't shift anymore than he could. If they were forced to face the evil in the depths of the old mine, they'd need a third from Merlin's bloodline. Where could they possibly find her? Because they needed a Keeper and Keepers were always female.

All they had up there for a third was a Siamese cat. Granted she was female, plus weird, but that wouldn't help keep the black dragon confined.

On the plane, Ellis's mind flipped back to how he'd gotten involved in the first place. A letter came from Mona Terrick, a sort-of cousin he'd met as a child, telling him she was taking care of his great-aunt Enid, who was dying and wanted all her relatives to visit as soon as possible. He soon learned David and Gwen had gotten similar letters.

Enid died before they arrived. Though they'd expected Mona to be at the house, they hadn't expected to see a stranger, Vran Pender, who'd arrived two days earlier in response to Enid's letter. The three of them hadn't been sure they could trust Vran, but it was obvious Mona did.

Ellis soon began to feel out of the loop, because David seemed to know what Vran meant by Mona being the new Keeper now that Enid was dead. At least Gwen also seemed mystified and, strangely enough, Mona herself. But then Ellis had run afoul of Louhi and, for a time, his actions were not his own.

He soon found himself locked up to keep from harming anyone.

Vran and David had switched into their dragon forms to fight for being Guardian to Mona's Keeper and David not only lost, but disappeared, So Gwen had been forced to go along to the dragon's lair in the mine to set the wards.

If only that had remained permanent,. But the evil began seeping from the mine once again. He and Gwen were left at Enid's house while Mona and David went to Wales to try to discover the origins of the Immortal Black Dragon.

Gwen, of course, still searched for her missing twin brother. But it was Ellis who discovered David was alive when he answered a call he didn't understand, but an ancestral memory did. He'd wound up in the mine with David and a woman strange to him.

After they'd once again set the wards that kept the dragon confined, he found out where David had been and met Tima Pasanen, who turned out to be another Keeper.

Tima had a young sister, Kam, who was unusual. Weird was his word for the girl. After Tima and David married, he and Gwen returned to their homes in New York. Since then he'd been so preoccupied with his own dark problem he hadn't given any thought to failing wards. Bad mistake. So here he was, his own darkness unresolved, once again girding up to face a evil monster.

Even worse, once Gwen heard about the wards failing, he knew she'd head for Enid's house. And he'd already be there. What if the darkness within him took over? Could he keep from harming her?