When Daniel Sun, the Protector of the China Xiamen Tiger clan, was charged with the responsibility of finding and procuring the seeds of the ancient peach tree, he realized his mission would not be easy. He finds out just how difficult when he runs into Xiwangmu’s protectress, Eternity. She will do anything to protect the very thing he’s been asked to steal, including murder. When Xiwangmu offers him a deal, seduce her granddaughter and get her with child and she’d willingly give the seeds to him, he’s torn between his human side and that of his cat. While he finds Eternity sexier than hell, he has only one small problem; his cat wants to claim the wild tigress who’s Eternity’s protector. How can he pick one of over the other? Or will the Gods shine on him, and let him claim both under the sacred Peach tree? 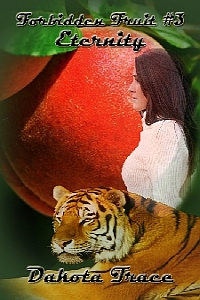 Oranges For Apples [Forbidden Fruit #4]
Millie Andersen
In Shelf
$1.99
All Books In Cart
All Books In Bookshelf
Excerpt

Following the wall which dividing the common gardens from the sacred orchard, Daniel stared at the tall peach tree. Even as he studied the tree, he wished it to hell and back. Without his mission between them he knew that he’d easily had Eternity for the taking. Since they’d been touching earlier, he’d felt her sorrow at the idea he’d wanted her only for the seeds. He was between a rock and the proverbial hard spot. He was damned if he did and damned if he didn’t. Without the mission, he’d have never met Eternity but because of it, she refused to trust him. Her lack of trust was starting to sting.

Grabbing an ordinary peach off a nearby tree on the common side of the gardens, he rubbed its lightly furred skin and imagined it was Eternity’s skin he was touching. Rather than the cool flesh of the fruit, hers would be warm and welcoming. A low groan built in his chest when he lifted the fruit and smelled its warm tones and was reminded of the object of his lust.

“Christ, I’m pathetic. Everything reminds me of her and damned if I don’t want her. I need to sink so deep in her she’ll never be able to get me out.” After taking his pocket knife out, he cut the peach in two, removed the inner pit and took a sharp bite out of the fruit. He moaned loudly this time when the sweet-tart flavor of the peach washed over his taste buds.

Standing about ten yards away from Daniel on the opposite side of the wall, Eternity froze as she heard Daniel’s words. With the dense vines climbing the wall and being up wind from him, she knew he couldn’t possibly know she was near. Desire sharp and biting grabbed her and this time she couldn’t blame it on her tigress. After running for almost an hour, her tigress was tired and firmly in her control. No this was her human needs, pure and simple.

Catching her lower lip between her teeth, she fought to control the building need to moan. She failed miserably when he sucked the running juice off of his finger. Her breath caught in her throat when he paused for a moment before looking up at her. His eyes darkened and he pushed away from the wall. Coming to stop with only the wall of the orchard between them, he held out a moist chunk of the peach for her.

Without speaking, she reached for it. When he pulled it back out of her reach, she looked up at him with the obvious question in her eyes. Holding her gaze, he offered it again. This time she didn’t reach for it. A small smile graced his mouth before he rubbed the fruit against her lips.

Parting her lips, she nibbled at the fruit while she continued to hold his gaze. Her womb tightened harshly as she read the desire in his eyes. When she finally reached his dark fingers, she gently tugged the remaining peach from them before licking the stray juices from them. His low growl had her longing to throw herself over the wall at him.

His question had her nodding slowly.