When self-professed geek and high school math teacher, Sammy Briars, decides it’s time to live life, she means it. Desperate to put her father’s harsh words behind her, and armed with determination and her life savings, Sammy buys the motorbike she has always dreamed of.

Excited by speed, fast engines, and leather-wearing men, Sammy finds herself in the company of kindred throttle-junkies who know how to live. And in the arms of the hottest biker of all.

Josh Grieve agrees to take his elder brother's bike-touring group on a biking weekend, expecting to see the countryside from the seat of his favorite Suzuki and the chance to kick back from his busy schedule. What Josh doesn’t expect is for his life to be turned inside out by a timid, intelligent woman who rocks a set of bike leathers. 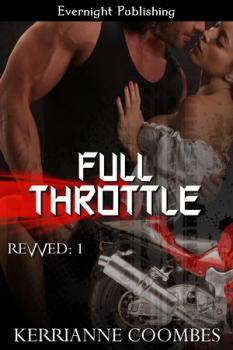 “While you were worried about why I like you, I was thinking about how much I would be pissed off if you asked me to leave.” Josh stood up, but kept his hand in Sammy’s hair, then he lowered his face, so their breaths mingled and lust punched him hard in the gut. “You see, I think I have a taste for intelligent, sexy, classy women who make me wish I’d been better at school. I think—no. It’s a fact. I know. I find you fucking sexy, all curves and blushes. But Sammy, my favorite thing about you is the fact that you let nothing get in your way.”

Josh watched as Sammy’s gaze went wide as if his words shocked her. Her hands gripped the arm on the chair tightly.

He dipped his mouth and kissed her.

Sammy moaned a little, the sultry sound making him burn instantly with need.

He pulled his mouth away and glanced down to her bared thighs. His t-shirt looked damn good on her. Her legs were naked from the middle of her thigh, his shirt riding high, yet covering her sex from his view. He liked the tease of knowing all he had to do was slide his hand underneath and he could see her core. Josh decided she could keep the shirt. In fact, he wondered if he could demand she wore nothing but a t-shirt in his company—that, or go naked.

He dropped his hand to her left thigh and slid his palm upwards slowly, just like he imagined. Sammy tensed under his caress, but instead of moving away, she parted her thighs a little, an invite that Josh was thrilled to receive. An invite he knew no other had received. Sure, she’d slept with other men, but Josh had no doubts that Sammy had never been so bold, so brazen, so hungry in her life.

Against her mouth he muttered. “You are genuinely the sexiest woman I have ever met.”

Sammy scoffed a little and Josh tapped her thigh.

“I mean it, Sam.” He lifted his mouth from hers and stared into her rapt gaze. Josh pictured himself making love to Sammy on the living room couch in the lamplight. He pictured himself sinking into her tight, wet sheath and shoving himself balls deep, until neither of them could breathe.