Amelia is tired of being dead, cursed into a cycle of reincarnation and death at the hands of her lover. She craves the touch of him, her murderer. She searches Daray out but finds Charm instead. Charm is surprised by the ghost that she takes home. Amelia is more than a nuisance, she is an unexpected pleasure, a delightful sub. Daray is shocked to find his love in the arms of another woman. Even more surprising is the way Charm welcomes him into her arms and bed. Could this little charm be the key to breaking their lover’s curse? 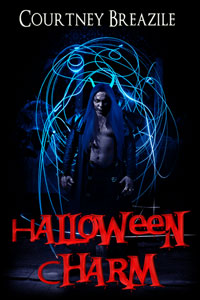 When the two women collapsed together, Daray slunk farther into the shadows, his body becoming nearly invisible as it mixed with the dark surroundings. He waited and watched, unsure of what to do. He didn’t understand what was happening between Amelia and Charm, couldn’t understand how they were able to touch and interact. He wasn’t sure if he wanted to alert Zarah to this new development.

I should turn and get away, as far as fast as possible. I shouldn’t risk leading Zarah here to her. I should give her this chance at happiness… Daray knew what he should do, but since when was he not a selfish bastard?

He grinned as he sensed Amelia coming aware, focusing. She would know he was there watching very soon.

Daray knew the moment she did. Felt her energy lock onto him and her heartbeat increase. She sat up and stared outside, her mossy green eyes wide and staring right at him. She wouldn’t be able to see him, he knew, but she was staring at the shadow as if she could.

Daray couldn’t make himself move as he watched her trying to see him, hope and fear on her face. He wanted to hold her, feel her and kiss her. Make her come and come with her like he had just seen Charm do. Everything he had been denied for so fucking long, because of Zarah’s jealousy.

In that moment he didn’t care about the risk. He was suddenly standing in Charm’s living room, completely visible to the two lovers.

Amelia noticed him first, her head swinging around, her mouth and eyes wide.

Charm turned quickly to follow her shocked gaze. Spotting the massive demon in her living room, she didn’t act as he would expect. Rather than screaming and running, she took up a defensive stance. The whip held like a weapon in her small hands. “What the fuck?” Charm whispered, the only indication of unease she gave.

“I think this needs explanation, Amelia my love.” Daray swept his hand out, indicating the two naked women.

Amelia’s face brightened to a deep red and she quickly grabbed her clothing.

Charm looked between them with clear confusion on her face. “You know this…thing?”

“I’m a demon, what the hell are you that you can see…and touch her?” Daray demanded, his anger heating the room.

Escape to the Border Lands (MFM)
Marla Monroe
In Shelf
$2.99
Tweets by
sirenbookstrand