There’s just nothing sexier than a man who loves kids and knows how to show it. Everyone knows that’s a man who can be trusted with your heart. And, as they grew older and hotter (and so do we), it’s equally sexy to see a man treat his teenaged or young adult offspring with love and respect.

So curl up in your favorite chair and read these radically different tales of fathers we love from new dads to old dads, gay dads, vampire dads and even some dad ménage! 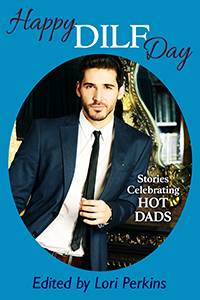 I let him talk about the wedding, and the people, and the kids’ future, and when I pulled into the gravel driveway of my friend’s summer home, it finally became clear to him that we weren’t going to his hotel.

I got out, took off my heels, and popped the trunk, where I tossed my shoes in, and pulled out a blanket. Then I came around to his side of the car. “Follow me,” I said. And he did. He really didn’t have much of a choice.

I led him to the beach behind their house. It was empty, and the moon was full. I put the blanket down, and patted my side. He sat down, and took off his shoes and his dress socks, and dug his flexible toes into the damp sand like a kid.

“I haven’t done this in years,” he said, shaking his head, and I wondered what he was referring too. Sitting on a beach after midnight? Sex on the beach? Sleeping with a woman his own age? Or all three.

But before I could ask him what he meant, he was undoing his tie and taking off his suit.

“I’m overdressed,” he said, as he removed his legs from his pants.

And as I was telling myself that they were very nice legs, he removed his Calvin’s, and extended his hand. “Care to join me?”

He was right. I hadn’t done this since I was a senior at Bennington.

From Father of the Bride

Owned by the Club (MFMMMM)
Sam Crescent
In Shelf
$3.99
Tweets by
sirenbookstrand