Jim Russell didn't care the rest of his buddies from CCD had found their true loves and had gotten married. He was done with the whole dating scene. Well….he thought he was until he saw her at the airport and secretly he began to change his mind.

Keira Winters had always been known as strong, outspoken and very independent but after an accident something changed in her and she wasn't the woman she once was. She wants to get back to her old self. Will she be able to with the help of a man she "hated" at first sight?

Will Jim and Keira be able to overcome their battle of wills to find everlasting love in the final book of The Men of CCD Series…….Help Wanted? 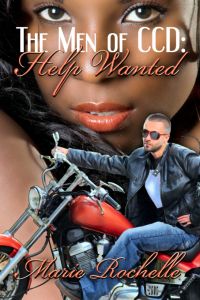 Thick black smoke filled Keira’s lungs as she tried to crawl through the debris that covered the carpet floor. It was so dark that she could barely see her hand in front of her face. She heard the moans of the people around her and tried her best to help them. Without a doubt in her mind, she had to get up off this floor and walk; it was the only way that she would be any assistance to anyone. She ripped a piece of fabric from the arm of her uniform and covered her mouth hoping it would keep some of the smoke from overwhelming her.

Sticking her hand out next to her, she felt around in the darkness until her hand touched the side of a seat. She grabbed it and pulled herself up. The smoke made it harder to breath and she coughed several times. Shaking off the frantic feelings rushing through her fatigued body, she tried to slow her pounding heart.

She had to get herself back under control. It was her job to help those around her. She didn’t have a clue where the plane had crashed or how many people were still even alive.

She moved the cloth away from her mouth and hollered. “Can anyone hear me? Is anyone hurt? Please scream out and let me know.”

Time seemed to tick by forever before she finally heard a response.

“Yes…I’m over here. I need some help. I can’t move my legs. I think one of them got broken by the seat in front of me when the plane went down.”

Keira slowly made her way towards the sound of the man’s panic-filled voice. She was halfway there when the sound of something snapping caught her attention, and the part of the plane she was trying desperately to reach gave away and disappeared from sight…

“No!” Keira screamed as she bolted up in her bed. The sheets were twisted around her sweat- covered body plastering her nightgown against her skin.

She scanned the dark bedroom trying to remember where she was. It took her a while to realize that she was at home and not back in the nightmarish wreckage of the airplane crash or still inside the hospital. Reaching across the bed, she fumbled with the lamp switch before she finally got it to come on and light the room.

Bringing her legs up to her chest, she dropped her head down on her knees and took several deep breaths. I have to stop having these nightmares. The plane crash happened over eight months ago.

She couldn’t understand why she wasn’t getting any better. She wouldn’t get her job back unless she got a grip on her fears. She loved being a flight attendant and she didn’t know what she would do if she had to give it up.

Untangling her body from the sheets, Keira got out of the bed and slowly made her into the bathroom. She flicked on the light and stared at her reflection in the mirror. The frightened woman gazing back at her wasn’t the person she wanted to be anymore. She missed laughing, having fun with her girlfriends and flirting with hot guys.

Her friend, Charisma, had invited her over several times to see the new baby, but she wasn’t up for that yet. Everyone had been so worried about Charisma because she had gone into labor six weeks early.

Jenisha told her that Dave had practically made the entire hospital staff crazy with all of his questions and demands. He had almost been banned from the waiting room by hospital security until Clinton calmed him down. What hurt the worst is she wasn’t here with her best friend when she needed her the most. She had been overseas on a flight when Dave Jr. was born.

However, everything turned out perfectly in the end because now Charisma and Dave were the proud parents of a healthy eight pound baby boy. Charisma had emailed her a couple of pictures and he was absolutely beautiful. He was really going to be a heart breaker when he grew up.

She was ecstatic that all of her girlfriends were married to the loves of their lives with beautiful and happy children, but she had to be honest with herself. She was more than a little envious too. It just seemed like everything was going so wrong for her.

For years, she thought she would be ‘the one’ who would get married first and have a house full of children, but it didn’t turn out that away. She was the single one living vicariously through her friends’ happiness.

Plus, her father passed away from Alzheimer’s a week before the airplane crash and she still hadn’t recovered from that loss. He had been her only parent since she was thirteen years old. Her mother had gone into the hospital to have her appendicitis removed and ended up dying on the operating table because she waited too long to go.

Her mother had hated doctors, needles or anything that involved medicine. The loss had devastated her father and she always wondered if he really ever had got past losing his true love. Everyone thought the disease had taking him away from her, but she truly believe he had died from a broken heart years before his Alzheimer appeared.

She had to get herself together so she could deal with the guy coming tomorrow about the shop. She still couldn’t believe her dad had sold the bike shop without talking her to first about it. How did she know that the disease hadn’t already started to take over by then? Maybe this guy had tricked her poor unsuspecting father without him even knowing it

Dennis Winters had loved his motorcycle shop Choppers. When she was a little girl she would come home from school and often find him there working on a new bike. The look of happiness on his face always amazed her because she never got what he found so appealing about it.

He tried teaching the family business to her, but she just wasn’t interested. Now because of her indifference, a total stranger was going to be working in the family business right next door to her house. She hated it, but there was nothing she could do. Before his death, her father had made the contract legally binding.

Keira brushed her hair off her face and grabbed a washrag off the rack by the sink. She turned on the faucet, dampened the cloth and ran it over her face hoping it would relax her and help her get back to sleep without any of the nightmares coming back to haunt her. After she finished, Keira turned the water off, hung up the cloth and returned to bed.

Seduced by the Moon (MFM)
Morgan Fox
In Shelf
$4.99
Tweets by
sirenbookstrand