Unhappy in his simple life of work and more work, Hiram Oversher decides it’s time to find a bride and make a new life for himself. When he passes through the gateway he’s been warned about since childhood not to enter, his body awakens to a sensual calling and energy he cannot understand. He sees visions of a beautiful maiden, nude and in need of him. Inside the keep of Lord Beorolf, waking dreams and those during sleep reveal a secret Hiram longs to uncover and know. 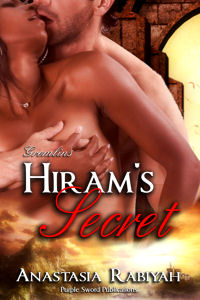 Hiram wants to leave Pig's End and pass through the portal to another realm. He's bored of his current life and he is curious of what the other side can offer. When he is sent to jail in the other realm, he never thought he would meet Secret, a beautiful and mysterious woman. Is the woman really what she seems to be?

“I won’t leave without you.”

Hay shushed and scratched in the opposite cell. The dark eyes vanished. Moments later, the maiden came forth, her fair skin glowing a faint blue in the sliver of dawn shining down from a high window. “Kiss me,” she whispered. “To seal your vow.”

Hiram swallowed his words and strode across the steps parting them. He wished he could truly kiss her through the bars, but even this small touch swelled his chest. He placed his hands at either side of her face, leaned in and pressed his lips to the prison parting them.

Her lips met his, warm, wet and tempting. The two lingered there, apart and together, Hiram overwhelmed by the tiny contact.

She moved back and regarded him. Her dark eyes sparkled with light, but he decided it must have been from the sunlight above. “What is your name, my savior?”

Her full lips twitched with unspoken mirth. “Pig’s End. You’ve been a naughty one. You crossed the rift.”

He nodded. “I went through the portal too.”

His eyebrows knitted together. “I don’t want to go back.”

She placed a hand on the bars, flat against where his palm rested. The maiden sucked in her lower lip while she regarded him. Letting it loose in a teasing way, she spoke once more. “I am called Secret.”

“Secret?” He breathed in her scent, a musky, feminine perfume he longed to taste. “That’s your name?”

“It is the name Beorolf gave me when he captured me and my kind.”

Metallic clunks thumped out in the hall, interrupting them.

“I want you,” Secret murmured before she backed into the shadows. “Beorolf comes to us now.”

Bitten By Love
Crymsyn Hart
In Shelf
$4.99
Tweets by
sirenbookstrand