A Walk Between Worlds

Change, forgiveness, and love in a war-torn world are hard to come by.

Bent on vengeance and answers, Treila leaves the safety of Telen City to seek out the mysterious dark-winged angel responsible for her sister's death. She's unwillingly thrown into a race for her life with the very man she hates, only to find that he was changed by her sister's light as much as he will be changed by Treila's dark magic.

All Kolar has known is a life of murder and loyalty to a cruel master. But his last assignment's kindness awoke compassion and empathy in the cold-hearted assassin making him question his life. After failing to save the innocent woman who showed him cruelty was not the only way, he is banished to the void. When Treila accidentally releases him he knows he cannot fail a second time. 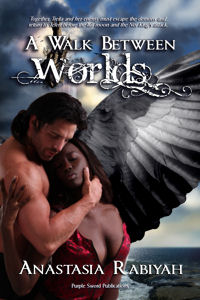 A Walk Between Worlds

Outside the room, the sounds of hooves clopped across the stone floor. Someone was coming, perhaps just a guard checking in on those prisoners in the torture rooms. Perhaps someone worse. Kolar raised his face. “Let me take you from this place.”

“You must. There is no one else, and someone is coming.”

The door to the room began to open. Grim, gray light spilled into the darkness. She turned her head to see who was about to step in. In that small instant of her drawn attention, he bridged the distance between them, slipped his hand over her mouth to silence her, and enfolded the woman and himself within his black wings. It was an old trick of the demons, a charm of invisibility that he had mastered as a youth. The darkness of his feathers blended in with shadows all too well.

She stiffened in his hold, but didn’t struggle. The scent of her hair and skin was familiar. He clutched her and waited. She smelled like Minai. She smelled like hope and freedom. He wished she would cling to him and take away the horrible pain and emptiness he felt inside.

The intruder was a lowly guard, a lesser demon who plodded into the room, glanced around once, and then left with a slam of the door. Kolar listened as the guard’s steps echoed farther away. The woman’s body felt good next to his, warm, hot even. He didn’t want to let go of her. “What is your name?” he whispered by her ear.

“Treila. Last princess of the Telen people, thanks to you.”

He set his chin on her shoulder. Sadness lingered in his voice when he spoke. “I give you my life, for all time. I owe you so much more for having taken your sister from you.”

“You killed her.” Her voice caught in her throat.

“No. I would never have hurt her.” But he did feel responsible for her death. He didn’t have to bring Minai to the demon king. They could have fled, flown to the south on the high winds and hidden in Darkwood Forest. Anyone who ventured there was never seen again.

“I don’t believe you.” She shoved away from him and burst free of his grip. Her escape parted his feathers, and one ripped free with a painful pinch. The long black plume fluttered in lazy circles until it hit the floor. He watched the woman stomp toward the door. She was afraid, but she was brave—a dangerous mix.

“Wait.” He started after her.

She ignored him and opened the door. Treila looked out into the hall beyond. “I’ll avenge her death.”

He sighed. “How?” Kolar set a hand on her shoulder, readying to pull her backward in case anyone approached. “You are only one, and you have no weapons. Do you expect to march into the demon king’s throne room and choke the life out of him with your bare hands?”

“If I have to.” She slapped at him, but he tightened his grip and did pull her back then. Treila stumbled into him. He shut the door and set her up straight.

“How did the door to the void open? Was it you?” He nodded toward the trapdoor he had dispatched the demon into.

He chewed his cheek, knowing well enough what the demon had tried to do to her. She had her sister’s eyes, her sister’s mouth. Her lips turned into a snarl as if she could sense the direction of his thoughts. He found her alluring, dirty though she was from having been stolen. He could see the beauty of her waiting to shine through. His body stirred, quickening at her closeness. His heart thrummed harder in his chest. He licked his lips and tried to stop thinking about what it would be like to pull her into his arms again—maybe kiss her cheek, or trace those full lips with two fingers, back and forth, until he memorized their softness. “Treila, let me take you away from here. Let me take you to safety, to Darkwood.” His voice had grown husky from the desire flickering inside his chest.