Kezia thought her life couldn’t get any worse but events proved her wrong.

On the run from vicious thugs hired by her ex-boss, Raul Casaro, who believes she has stolen vital information about his business dealings she takes refuge in La Rochette, a bistro run by a gay couple, Marc and Jason. But is Kezia wise to place her trust in Marc and Jason or will they betray her too?

For Marc Linton and Jason Deveral Kezia’s arrival brings major change to their well-ordered life and danger in the form of a revenge attack on their home by the men searching for Kezia.

As things heat up for Kezia, mounting sexual tension forces her into a radical reassessment of her relationship with the two men. While for Marc and Jason, a surprising turn of events offers them an unexpected solution to a longstanding problem and provides them with the one thing missing from their lives. 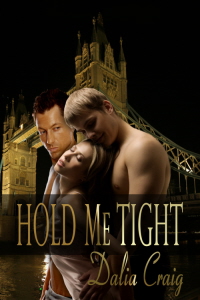 Kezia huddled in the corner; consumed by inordinate fear, every nerve in her body vibrated with uncontrollable energy. A soothing voice cautioned her to calm down, but convinced that it was a trick, she refused to listen. She covered her ears with her hands to silence the insidious whispers but she couldn’t escape the fear or the hideous screams still echoing inside her head.

Those faceless creatures were closing in on her and she couldn’t do a thing to escape their clutches.

“No!” Kezia lashed out and connected with a solid mass. The unexpected feel of warm flesh against her skin sent a ripple of desire rushing through her body. Almost before she’d assimilated this information, firm hands gripped her by the arms and pinned her against the wall. She kicked out, screamed, and fought the evil beings. Yet the harder she struggled to escape their relentless grasp, the more her treacherous body betrayed her and the more excited she became.

She could smell them; smell the unmistakable aroma of sexual arousal emanating from their skin. Or maybe it was coming from her. An insatiable hunger permeated her body, converging at her core, sending a flood of hot juices pouring into her throbbing pussy. The pain of denial was almost too much to bear. She wanted relief from the constant torture of unfulfilled need, and if the only way she could achieve peace of mind and satisfaction was to give in to their demands then she was almost prepared to let these creatures do their worst.

Then she heard her name, the familiar voice made her open her eyes. She blinked, focused on the nearest figure and connected with Marc’s dark eyes. She turned her head away to escape the intensity of his gaze and found Jason on her other side. Both men were naked save for their boxers.

“Come here, Kezia. It’s okay now, you’re awake..” Jason scooped her up in his arms, like a baby, and then carried her along the passage to the other bedroom where he placed her carefully in the middle of the super king size bed he shared with Marc, before the two men got in either side of her and held her close.

“This can’t go on. Every night this week we’ve gone through this same ritual.” Jason gave her a hug. “In the future you’ll sleep here, with us, until you’ve conquered these bad dreams once and for all.”

“If you’re worried about us having sex, don’t be. We can make love anywhere, anytime; it doesn’t have to be at night.” Jason smiled reassuringly.

Kezia blushed. A tide of heat swept up her neck and infused her face. The thought of Marc and Jason having sex hadn’t actually crossed her mind. She just didn’t feel comfortable sharing a bed with two men that she hardly knew. Shaking off Jason’s arm, she tried to climb over him and move to the edge of the bed.

“No, stay here.” Jason pushed her back. “You must trust us to help you.”

Trust… Kezia focused on that one word, a word she hated. Tension gripped her body. She knew Jason meant well, but she wished he’d used a different word. Whenever she placed her trust in anybody or anything in the past, they or it had always let her down.

“Yes, you can; just go to sleep. Everything will look brighter in the morning.” Jason stroked her hair.

He must be joking, there was no way she could relax enough to sleep sandwiched between their two warm bodies. Instead, she tried to simulate sleep by keeping as still as her over-active imagination would allow and regulating her breathing to a mere whisper.

Kezia kept her breathing under control, successfully feigning sleep, until Jason slid his hand across her waist to rest lightly upon Marc’s body.

Too antsy to sleep, she lay awake staring into the darkness, listening to the even breathing of the two men while she tried to figure out how to survive the intimacy this bizarre situation had thrown up.

The weight of Jason’s arm was torture enough but when Marc’s cock came alive, and beat a gentle tattoo against her hip, she almost jumped out of her skin. She tried to ease her body away from Marc’s, moving very carefully so she didn’t wake either man, but found Jason’s solid frame blocking her way.

Tension built in her chest making breathing difficult. She longed to touch herself, to relieve the ache, to satisfy the hunger gnawing in her gut, but doing so was out of the question. Trapped between Jason and Marc with nowhere to go she faced a bleak night of abstinence.

“Do it,” Jason whispered softly against her ear.

Kezia froze in an instant. The breath caught in her throat and she nearly choked. Was Jason a mind reader? Or had she given away some sign of her desperation for sexual release?

“I can’t, I…” Kezia shivered, she couldn’t face the embarrassment of Jason knowing what was going on, of him feeling every little movement, and hearing her moans.

Jeez! What did he know? Was he getting a kick out of this?

Jason didn’t strike her as a voyeur, but you never could tell what made other people tick. Look how wrong she’d been to place her trust in Raul Casaro.

She clenched her thighs and fought the rising tide of need clawing a hole in her resolve. There was no way she was going to perform with Jason not only dictating her every move but also possibly getting his rocks off as a result of her actions.

God! What a thought. An icy shiver trickled down her spine.

“I don’t want to do this.” She made another attempt to withdraw her hand.

“Yes you do.” Jason laughed softly and tightened his grip. “Just relax, forget about where you are, or who you’re with, and let your body make the decisions.” He moved her hand, guiding it smoothly across her labia as if it were a computer mouse, teasing her, keeping contact with the most sensitive area of her body until her resolve crumbled and she seized control.