Hot Under the Collar

Domination and desire go hand in hand, but are you ready to submit to the ultimate in sexy seduction? 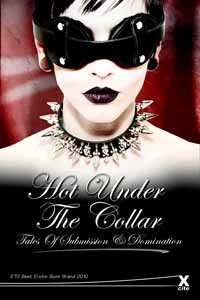 Hot Under the Collar

She was young, but the bun high on her head made her look serious. She smiled at people as she passed them on the street, her heels clicking on the pavement as she scanned the buildings until she came to the one she was looking for. Her steps, so confident on the street, hesitated as she stepped up to the door of the apartment building, which opened before her.

The apartment was on the third floor. All swagger was gone from her walk as she knocked softly on the door. It was opened by a young man, who stepped back without a word. She took a step forward into the room, then folded as was expected of her, her knees hitting the floor as the door shut behind her. A woman’s voice issued from a room beyond. ‘Is it here?’

The man’s hand fell to the woman’s head, and he smiled. ‘It’s here, Tiff.’ To the woman on the floor, he added, ‘Welcome, Pet.’ The woman, eyes on the ground as she enjoyed his hand on her hair, just smiled.

Tiff emerged from the kitchen a moment later, frowning at the scene. ‘Ryan, it’s not even wearing its collar yet!’ He smiled at his girlfriend as he reached up to take a SmartCollar off a table nearby.

‘My bad,’ he said. His fist clenched in the hair of the woman on the floor as he yanked her head back. She whimpered a little, her eyes going to his face and a hunger in her gaze. He smiled at her as he placed the collar at her neck; it clicked itself into place. ‘You’re not a woman any more. You’re just a pet, to be used however we want.’ He showed her the controller for the collar. ‘It’s set to remain in place for 30 hours. It will deliver an incapacitating shock if you attempt to leave the apartment before the time is up. If you still want to go forward, press your thumb to the key pad, there.’ She did, and he smiled and jerked her hair.

‘Careful, Ryan, you’ll hurt the poor thing,’ Tiff said, stepping forward and bending down to stroke the woman’s hair back into place. The girl on the floor whimpered again, leaning into Tiff’s hand. ‘Aww, see? Sweet pet.’ Tiff had reached up on to the shelf as well. With a tiny click that sent shivers through the girl on the floor, a leash was attached to the collar. Tiff stood up again and started to walk away. ‘Come, Pet.’

Ryan smiled, his penis already forming a huge bulge in his pants as he watched his girlfriend lead their new pet toward the back of the apartment. Tiff added a sweet sway to her walk as the woman crawled after her. She stopped in the doorway to the bedroom, leaning against the frame as the woman stopped behind her and came to a kneeling position. ‘Pets don’t wear clothes.’ Tiff unclipped the leash. ‘Stand up. Strip.’

The pet glanced at Ryan, then back at Tiff. This was their first meeting in person, though the three of them had spoken often online and over video in the past few months. She wasn’t to speak except to use her safeword. She stripped, slowly, eyes downcast. Her face flushed with shame, but she felt a similar flush between her legs as she submitted to them.

‘Good Pet,’ Tiff said, stroking her head. She clicked the leash back into place, and the pet followed, still on her feet since she hadn’t been told otherwise, as Tiff led her toward the kitchen and an enticing blend of scents. ‘Lie down.’ Tiff pointed to a large dog bed in the corner of the kitchen. As she lay down, the pet noticed there was a bowl of water beside her. Tiff clipped the leash to a hook in the wall, and joined a visibly aroused Ryan at the table.