Ice Cream in the Snow

A past she never knew, a debt never paid. Will it cost her life, and her heart?

Jessica Harden has lived her adult life raising and protecting her son. Except her surprises have been lying in wait. With the inheritance of her own business, her ordered life begins to experience the darker side of her ex-husband's history, involving secrets and money. And someone in the shadows knows about both. 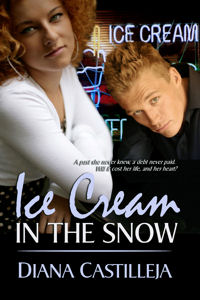 Ice Cream in the Snow

“Jacob, don’t forget your book bag,” Jessie called over her shoulder from the kitchen. She shot an anxious look at the clock on the wall to find they were both cutting it close.

“Got it here, Mom.” Jacob rushed into the kitchen, grabbed his lunch, and stuffed it into his bag. Watching his total disregard for the poor sack, she knew instinctively his lunch wouldn’t resemble food in four hours.

“Did you finish all of your homework?” She screwed the cap onto the juice, and placed it in the refrigerator. She frowned, noticing he hadn’t buttoned his shirt all the way again. She wondered if other parents had problems getting their children to dress themselves. Had to be a teenager thing.

“Yeah, all done. Don’t worry, Mom. The essay isn’t due until the end of the week.” He gulped his juice in seconds, then tossed the cup into the sink. She saw him make a final, searching look before he whipped around, rushing to catch the bus.

Jessie planted her hands on her hips and tilted her head. “Hey mister, forgetting something?”

Jacob turned, a bashful hue tinting his cheeks. With a quick kiss to her cheek, he made good on his escape.

“Don’t forget to tuck in your shirt!” Jessie yelled after him.

She smiled at his disappearing back, knowing with a mother’s intuition her words would be ignored. The slam of the door echoed through to the kitchen. Going nothing to ninety. She envied his constant energy, and not too secretly either.

Jacob was an incredibly smart young man, at least in her eyes, although twelve wasn’t considered as young as it might once have been. So much more was expected of kids today, far more than she could remember. She was glad he had some good smarts to work with. If Jacob kept his classes in order, and kept his grades up, colleges would be looking for him instead of the other way around. It was a promising prospect for her son’s future, which made her very proud of him.

The two of them were a good team. They both had a say in whatever happened in their world, although when necessary, she did take the ‘Because I’m the mom’ stand. Even then, she took the time to explain the whys if she could. All they had was each other, so their relationship had to be understanding if not equal, as much as possible. It showed in Jacob’s maturity. She was always receiving end of year notes from his school teachers praising him.

She flipped the switch to the light in the kitchen and made her way through the house. She remembered when she'd bought the three-bedroom house, not long after her divorce from Arthur. It wasn’t large, but it was permanent. It exuded that homey feeling she remembered from growing up, a feeling of family. It held a certain appeal she had immediately felt drawn to. There was a warmth in the house, almost a calming quality. It was the perfect house for her when she needed a home to give a stable life to her and Jacob.

The sunlight beaming into the kitchen was what had sold her on the cozy home from the beginning. The way the light shone through the windows over the sink had seemed so perfect, bringing back those moments from her childhood that she’d wanted to impart on Jacob. The bright arcs of yellow warmth scattered across the floor, and late into the day they would almost reach the counter across the table’s width, giving it an enchanted feeling bathed in that glow. She’d fallen in love on the spot.

She’d needed the security the house offered her when Arthur relinquished any rights to her life, the day she caught him in their bed with another woman.