Kenneth and Thorn have worked hard to uncover secrets about the Iris, the organization that threatens the government of mages that rules their world. They even revealed a spy among their fellow Enforcers. Now they head out on an undercover investigation to find out more about the dangerous organization.

Posing as a non-noble mage and his servant, Kenneth and Thorn begin to explore a city where the Iris once operated. In a city full of businessmen and prostitutes, not to mention the distractions of learning more about each other’s desires, they can only hope that they aren’t too late. 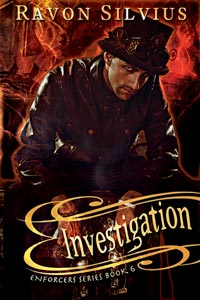 Kenneth jolted awake, opening his eyes to pitch darkness. For a moment he was back in the basement, the stench of mold and decay everywhere, Alder’s voice and his controlling power curling around him like mist.

His heart pounded, impossibly fast, but steady. He took a breath, then another, the ground beneath him not cold stone but soft, warm sheets and blankets. The echo of a gunshot faded from his dreams, and Verik fell. His mother twisted the aether into shapes that murdered hundreds. Alder lay on the basement floor, ripped apart.

No. No, no no. He squeezed his eyes shut, then opened them, spreading apart the curtains of the bed with a word to the aether. He still had power. And the palest of purple light illuminated the horizon, just enough to let him see his room, the soft carpet, and the familiar shape of his dresser.

“Kenneth?” The bed creaked, and a warm hand rested on his back. His lover, Thorn. “Are you all right?”

“I...” He hated leaving sentences unfinished. His father had always taught him that. His father, who’d nearly died today. Both his parents, he and Thorn, and everyone else... they’d all nearly died. “I suppose I had a bad dream.” His face flamed to say it. He thought he’d been doing so well. The basement was far away, harmless, and they had so much work to do, especially after yesterday.

“That’s all right.” Thorn sat up. The pale light illuminated his muscular shoulders as he leaned against Kenneth. “We’ve been through a lot. Too much.” He sighed. “I’d be shocked if you didn’t have bad dreams, actually.”

Kenneth traced a curling bit of decoration on the sheets with one finger. “We’re Enforcers,” he said. “But I feel like... I feel powerless at times. Even more so than I did when I was fresh at the collegium. The more I learn, the more—”

“The more you realize you don’t know,” Thorn finished for him. “I know how that feels.”

“And today we have to question Verik, and Lucas...” Kenneth trailed off, his father’s lessons fading. “I don’t want to be an executioner, Thorn.”

Thorn’s hand tightened on his shoulder. “Nobody does. With any luck, we won’t have to be.”

Kenneth surveyed the room. A long table stretched before him, the wood dark and gilded, the carpet beneath a plush red. The morning sun streamed through the windows into the great hall of his parents’ house, and Enforcers stared back at him.

Thorn stood next to him, his arms crossed over his chest, his metal hand tapping a quiet, steady rhythm against his arm.

They were looking to Kenneth, as if he had answers. What a change, after being not believed and even having his lover accused. As if he knew anything. He was the youngest Enforcer here—he’d hoped other, older, more experienced mages would have the answers.

But of course they wouldn’t. After everything he’d experienced the day before, he should have seen that. He lifted his chin, taking strength from Thorn’s presence beside him.

Kenneth’s back teeth ground against each other. “Bring Verik in. Render him powerless.” It was time for answers.

When Verik entered, it was with his hands tied behind his back. Ariel glowed with extra power, having sealed Verik’s magic, as Verik had wanted to do to all of them.

The bound mage glared at Kenneth. His dark eyes flashed with the promise that if he had his magic, Kenneth would be in cinders. For a moment, fear wormed in Kenneth’s gut. This was an Enforcer, one of the most powerful mages in the country.

But he was an Enforcer too.

“To begin,” Kenneth said, breaking the silence. “I invoke the right of Enforcer’s judgment.” He’d been expecting some surprise at his announcement, but nobody protested.

Enforcer’s judgment. With at least five Enforcers, there was no need to report anything to the Council. They could try and sentence anyone on their own—including putting someone to death.

He expected nothing. Marle had been silent, as had Jennfa. So when Verik answered, Kenneth fought to hide his shock. “Money, of course.”

“The Iris has wealth?” Thorn broke in. “And they promised it to you for what?”

“For my help. I am an Enforcer. All I had to do was keep any of you from noticing what was going on.” Verik shrugged. “Keep you off their trail. It was simple enough.”

“When they upended the nobility and took control of the triumvirate, my family would remain in power and be given twice the land and prestige we have now.” Verik’s voice was neutral, clipped. “It was easy work for huge gain.”

“You were going to kill us,” Connar broke in. “You very nearly murdered two dozen people. Two dozen of the country’s most powerful defenders. For money?” His voice boomed in disbelief.

Blaize and the Paramedic (MM)
Cara Adams
In Shelf
$3.99
Tweets by
sirenbookstrand