Life has changed for Jamilah. She’s of an age to be married off, and she knows her father will choose the most profitable match to advance his status. Although her heart chooses otherwise, there is no escape from the binding ties of her family and her father’s greed for control.

When Jamilah’s brother invites Vonhadi to visit their family’s’ estate, he jumps at the chance to see her again. Their first kiss seals their fate, leading to secret meetings and the glimmering hope of a future together. But he is a poor man living the modest life of a priest in the temple, the only thing he has to offer, his gift of elemental magic.

From the moment Droma’s future bride pulls the veil from her face, revealing the abuse she has suffered, he falls in love with Jamilah. He vows to protect her, but devoting himself to her happiness could mean letting her go free, something he may not have the strength to do. 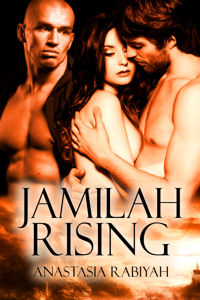 Theirs for the Taking (MMF)
Silke Ming
In Shelf
$3.99
Tweets by
sirenbookstrand