Marie hasn’t worked as a chalet maid long and she thinks she’s alone when she hears curious noises from one of the guest bedrooms. Further investigation reveals one of her prettiest and most buxom guests, Paula, pleasuring herself. Afraid of being caught watching, but unable to tear away her gaze, Marie can’t resist embarking on some solo satisfaction of her own. Next morning at breakfast, Paula makes it clear she knows Marie was watching and asks her to bring some painkillers to her room as she has a headache and won’t be going out skiing that day. But when Marie arrives at Paula’s room she realises that headache tablets are not what Paula is really after…

Marie had just taken off her shoes when she heard a dull thud above her room at the back of the chalet. She froze, listening hard. There it was again, a sort of knocking sound against the wall. Only it should have been quiet. All eight of the holidaymakers she was catering for had gone out into the local Alpine village after dinner.
Swallowing hard, she padded barefoot into the guest lounge and glanced up the stairs. The clonking was a fraction louder now. Whoever it was must have come back early, like she had.
She’d gone into the village and joined in with a silly drinking game that some of the other hosts and hostesses who worked for the same travel company had devised. She’d soon begun to feel queasy and decided to walk the half hour back to the chalet in the fresh mountain air.
Marie wondered if whoever was up there had returned for the same reason. Assuming it was one of her guests. What if it wasn’t?
Taking a deep breath, she padded silently to the top of the polished wooden stairs, stopped and listened.
Room number four. The door was slightly ajar. If she crept slowly forwards she could see through the gap, and ...
Marie’s mouth fell open. It was Paula, the darkest-haired of the four female guests, lying naked on the large double bed, her legs spreadeagled, one hand massaging a huge, firm breast, the other clutching a long pink vibrator which she was thrusting in and out of her pussy ever faster. Behind her, the headboard matched the rhythm against the wall.
Marie watched, knowing she ought to turn away and creep back downstairs. But she couldn’t, she was transfixed. In all her 25 years she’d never seen anything like it.
As she looked on, the buxom woman began to gasp and groan in time with her thrusting. Marie bit her bottom lip in case she did the same. She could feel her temperature rising, especially between the thighs.
It was too much. Without looking away from the naked woman writhing on the bed, she reached down, lifted her skirt, and pushed her hands into the top of her knickers. Her lower lips were already damp, so they parted easily for her forefinger to probe between them. Presently, a second finger joined the first, and grimacing with pleasure she searched inside, knowing that in there somewhere was a little spot that ... there! Marie sucked in her breath, held the tip of her finger on it, then began to massage the oh-so-sensitive button in time with Paula’s moans.
Marie couldn’t remember the last time she’d masturbated. It must have been as a young teenager, when her hormones were running riot and her parents had warned her off boys, refusing to allow any of them into the house.
The rhythm was hotting up now, and Marie knew she couldn’t stop even if she wanted to.
‘For hell’s sake, Marie, this is your first time abroad,’ she chastised herself, as her fingers pumped in and out. ‘If someone was to catch you up here you’d be out of the resort faster than you could say, “I’m coming”.’
Which she was, she realised, biting her lip harder and squeezing her legs together as a trickle of warm, wet fluid ran over her fingers and down her thighs.
At the same time she saw Paula arch her back for a long, long moment then slump back on the bed, legs and arms spread wide, gasping for breath.
Outside the room, Marie backed away towards the top of the stairs, trying hard not to whimper as each brush of one thigh against the other sent a shudder through her whole body. 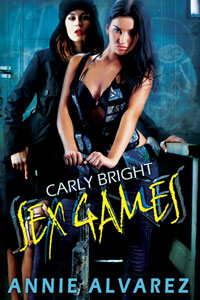 Waiting For Isabella
Miranda Forbes
In Shelf
$4.59
Tweets by
sirenbookstrand