Beaufort, South Carolina, orphan, Gordy, had always known he wanted to go with men. But when he was old enough he was not fully ready for being rushed into it by the boss whose Beaufort waterfront bar he worked in and the boss’ drill sergeant friend from the nearby Parris Island Marine base, while the three were boating in St. Helen Bay. Afterward Gordy’s work at the bar is extended to servicing men. One of them, Marine lieutenant Kevin Holton, and Gordy, become lovers and unknown to Gordy, his boss has the lieutenant beaten up and bundled off to his next assignment in Billings, Montana.

When Gordy breaks away from his Beaufort situation it is to aimlessly travel westward with the loose plan to reach the West Coast and start a new life there. As he travels, though, he falls into the easy stream of dancing poles and renting himself out to men to make his travel money in a months’-long exodus. At the nadir of his existence, having changed his name to Glade, as a rent-boy at a club in Abilene, Texas, and in danger of becoming a drug addict as well, Gordy has a revelation that he really needs to be moving north toward Montana.

After interludes in Durango and Denver, Colorado, that threaten to pull him back into the rent-boy life, he does finally make it to Billings.

But will he find his lost Marine lover there? And, if he does, will Kevin still want him? 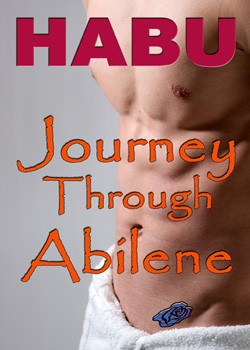 “Now you just stay there, like that, little darlin’, and someone will be along in a minute to give you more comfort.”

More comfort, Gordy thought, turning his face to the side and suppressing a sob, as Josh Cardwell slid his knees back from under Gordy’s buttocks, rose off the cramped bench bed inserted into the curve of the sailboat’s cabin, zipped up his shorts, and turned and climbed up the ladder to the deck above.

Gordy remained there, on his back, his legs bent and spread, the soles of his sneakers—all that he was wearing—flat on the red vinyl surface of the bend as much because he was numb except for the soreness in his ass as because Cardwell had told him not to move.

At the sound from the top of the ladder at the hatch out onto deck, Gordy turned glazed eyes toward the roofline of the cabin, where the rectangle of blinding light from the sun over South Carolina’s St. Helena Sound was blocked by the massive body of the Marine drill sergeant from nearby Parris Island, who Cardwell, with Gordy functioning as the deckhand, had brought out of Beaufort, South Carolina, for a fishing trip.

Gordy hadn’t had an inkling before they cast off from the Beaufort yacht basin that he was the fish being snagged.

The Marine, probably in his forties, had the muscular body of a much younger man. A very fit man, as would be required of a “show them rather than tell them” Marine drill sergeant.

“You ready for a real man?” he growled, the stern gravel in his voice belying the big grin on his face.