Jase Chambers felt like he was dying. He woke up with the rain dripping down from the trees above, hitting him in the face. He stared across a river of water and a sea of mud that caressed his body. His ankle hurt like a bitch. What the fuck had happened? The last thing he recalled was being in the guest bedroom of that Alpha wolf, Kade Ronan. Things after that were one big blackout.

At thirty-two, Jase had just discovered his wolf blood and began transitioning into a werewolf. The problem was that things were not going well. Jase often woke up in strange places with blood all over him and with no recollection of how he got there. It was scaring the hell out of him. He had to do something to make the blackouts stop.

He fisted his hands in the mud and grass, trying to stand up, but he had little strength. He was absolutely fucked if he didn’t get out of this weather. His teeth started to chatter. Hypothermia was right around the corner. Pain shot up his leg when he tried to move his ankle. Jase looked down, seeing a bear trap locked around his ankle. Oh, fuck. This was not good.

Jase felt hungover, but he hadn’t been drinking. God, he wished he had spent last night drinking at the corner bar. He slowly opened his eyes to the muddy runoff coming down the mountainside. He tried to remember how he had gotten the riverbank in the Black Forest, but he couldn’t. As usual, when he tried to recall the events of the previous evening it was as though there was a wall in his head. Rain started hammering down from above, but he didn’t have the energy to get out of the trap and move for the cover of the trees. He was completely naked and alone.

The last thing Jase recalled before he hit the mental wall was being with his brother Maddox and his new lover, Kade. As much as Kade and Maddox were trying to help him through, they really couldn’t. Despite having wolf blood, Maddox couldn’t shift, and Kade just really didn’t know what to do with him. Jase could not recall shifting into a werewolf and taking off into the night. The blackouts with his shifting were getting worse. He felt like he had no control over anything in his life anymore. As one of the top federal prosecutors within the county, he always had the power to manage his life. Not anymore. Now, he felt like he didn’t have any balance in his work and personal life. When the blackouts started occurring, he had taken a leave of absence with work. He didn’t want it to affect the cases he had going on.

One day he knew he had to go back to his job, but he couldn’t think about it now. Not when he needed to figure out how to control the beast that was living inside of him. Jase rolled onto his back, looking up into the cloudy mist hanging above him. He let the rainwater wash over his naked body. Wet mud clung to his skin, making it nearly impossible to move. Jase loved the feel of rain on his chest and face. When he was in his animal form, he didn’t like it at all. There was something about the way the water matted his fur that really irritated his skin. Jase froze. He actually got past the wall for a moment and recalled something from when he was a werewolf. Jase smiled. It was the first glimmer of hope he’d had in a really long time.

Jase’s eyes flew open as he looked around at the men circling him. He immediately felt vulnerable in his position. He did not want to deal with the strangers now.

Cold fear went through him. Jase knew he was in trouble. He tried to sit up but couldn’t. He felt like his body had gone five rounds with a speeding truck. What the fuck had happened to him last night? The not knowing was starting to eat him alive.

“I’ll give you twenty dollars to suck his limp dick while we watch.”

Laughter echoed among the group of men who were now circling him. Jase had a really bad feeling about all of this. He continued to play in the mud, not wanting to get up to face his attackers. It would be better if they thought he was still half-dead.

“Only twenty dollars? No. I wouldn’t suck his cock for anything.”

Another round of laughter went between the men. Jase had to figure out how to get away from them. Despite his protesting muscles, he sat up. Jase looked at all of his opponents.

“He lives! I guess we do have something to play with for a while.”

A groan of protest went through Jase’s body as he tried to move his ankle. Jase knew there was no way he could get out of this trap without help. He was now at their mercy and that scared the fuck out of him.

“Not going to happen. You invaded our territory. What’s on our land is ours. We own you.”

A shiver went down Jase’s spine. He knew there was no way out of this, but he had to find a way. “Look, I don’t want any trouble.”

“If you’re in the Black Forest, you want trouble.”

Sweet torturous anticipation went through Jase’s body as he waited for Brand to make his next move. Tension traveled through him as he waited for his Dom to take care of him. The chains shook as his flexed muscles shivered with pent-up frustration. He loved the clanking sound of the chains against the bed posts. He wondered if they would clank when they started to make love. He couldn’t wait for Brand to take him. Jase watched with wide eyes as he waited for Brand to return. Brand came back with a lit candle. He lifted it above Jase’s chest, letting the wax fall.

Hot oil smeared over his skin as he felt the wax drip down from the candle. The wax stung, biting his chest and smoothing into massage oil. Brand’s hand stroked over the stinging bite of wax on his chest, rubbing it into his sore muscles. The tips of his fingers moved down over his ass, spreading his ass cheeks wide. His fingers rubbed over his rim. Jase groaned, arching his ass out to Brand’s touch. He loved the feel of Brand’s fingers on his rim, stroking and pushing against his rim.

All of a sudden, Brand’s warm fingers pushed deep into his ass spreading him wide. He felt his fingers stroke in and out. With each tempting stroke, Jase arched his ass out for more. Pre-cum shot from Jase’s tip, sliding down over his shaft. He felt wet and ready for so much more. He arched his ass out, chasing Brand’s fingers as he pulled them from his ass. He felt Brand push three fingers into his ass, stretching him wider. He groaned, loving the feel of his Dom taking control of his ass.

Without warning, Brand pulled away, going back to his closet where he kept all of his toys. He came back with a thin silver chain dangling from the tips of his fingers. The chain looked like something somebody would wear around their neck. Jase took a deep breath as Brand stood before him, sliding that thin chain down over his shaft and down toward his balls. He slipped his balls into a secondary chain, pulling it tight. The effect was immediate and intense on his dick as it heightened his arousal. He then slid that chain around his hips and down between his ass cheeks, hooking it to the chain beneath his balls. By the time Brand was finished, the chain was pulled tight and rubbing against his rim with any slight movement.

Wave after wave of sensation went through his body as Brand pulled on the chain, tightening it around his cock. He groaned as Brand bumped their cocks together. Jase wanted more. Brand turned away. Jase was breathing hard. He had to rest his head on his arm as want flashed hard through his body. He felt weak and needy and completely fulfilled all at the same time. He wanted more from Brand. He couldn’t wait until he found out what he was going to do next.

Brand came back with a large butt plug. It glistened with lube in the light. He brought a bottle of lube too. He rubbed it all over his hands and then smoothed it down over Jase’s rim. Brand tipped that the butt plug up to his rim, pushing it deep inside of his ass. Five inches of silicone spread his ass wide. Jase cried out when the butt plug bottomed out deep inside his ass. He loved the feel of that butt plug, stretching him wide. Brand stood in front of Jase. Every muscle in Jase’s body was flexed and his rim contracted around the butt plug.

“You will not ever come until I give you permission first. You understand? If you do, you’ll be punished severely.”

Jase shook with nervous energy. He nodded his head vigorously as he sucked in his lower lip and bit it hard, wanting everything that Brand had to give him and so much more. Brand turned away, taking the cock from his ass with a sweet sucking motion that had Jase trembling with need. Pre-cum beat from the tip of his cockhead. He was so wet and juicy and ready to explode, but he didn’t dare come yet. When Brand returned, Jase arched his ass out. Brand smoothed his hands over his ass, spreading his ass cheeks wide. He rubbed the tip of his fingers down over his rim, moving the cock chain aside as he pushed his thumb deep inside his. With this thumb deep within Jase’s ass, he started to stroke his cock. 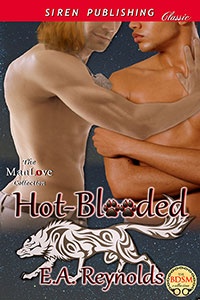