Ricky Marcel's been in LA for eleven months, struggling to prove his dad back home in Bourbon, Kansas, wrong. Very wrong. Ricky has the chops to make it as an actor. He proves it every day, charming not only his customers at the restaurant where he works, but also the numerous casting agents he sees for auditions.

When he's called in to read for a super-secret series, Ricky's stunned to find he's on the fast track to a fake reality show about gay gigolos. He's been in the closet so long he has no clue where the key is located. But the fancy Bel Air pad that comes with his job, not to mention the money, influence him to go for it.

Then there's Drake Hardy, a mysterious figure who is not only incredibly sexy, but the show's producer. The attraction between the two men is immediate. Yet Ricky becomes frightened when he learns that Drake is a Dom. Can Ricky not only be a whore on TV, but Drake's personal sex slave as well? 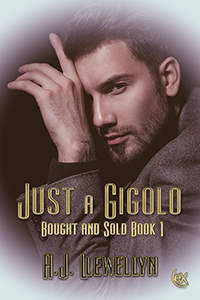 More From Bought and Sold

This time, Drake didn’t stop him. He didn’t push him back as though he were an over-eager puppy. He took all the desire and the swampy, dark lust Ricky had harbored, kept dormant. He took it and gave it back to him, unzipping Ricky’s top. He took it off, their hungry mouths meeting before the top was even over his head.

Ricky caught a glimpse of fire out of the corner of his eye. He wanted to look, but couldn’t. He was so worried this would stop. That Drake wouldn’t want him.

He had to touch him. Angels were on the balcony of his mental room somewhere because when he slid Drake’s jacket from his shoulders, he could feel the contained heat of the man’s body. He liked the silkiness of the shirt and the hard muscles beneath it.

“I lost my lover, too,” Drake said against his lips.”

Ricky went crazy then and almost ripped Drake’s shirt off.

“Easy, easy. Just undo them one at a time,” he rasped as Ricky almost tore off a button. “I’m not going anywhere.”

Ricky almost wept. Jimmy went away. The had loved each other, and their fucking, even their lovemaking, was always quick. They had to be quick. They took their sensual moments where they could.

This was a whole new world to him. Drake took his time, making sure Ricky was comfortable. He stripped Ricky naked, stroking his cock with an assured hand. He wouldn’t let Ricky finish undressing him, however.

He backed Ricky over to the bedside table with their tray of drinks. He held a lowball glass to Ricky’s mouth. Just that afternoon, Ricky had been taught the correct way to drink a cocktail, but right now, he couldn’t for the life of him remember how to do it…