Kelly and the Pirates

Kelly Winchester joins her husband, Jim, and another couple who try to interdict piracy operations in Eastern Africa. They are partially successful. After a brief respite on their secret island, they set off on another mission to find the pirate leader and a mysterious sniper trying to kill them.

Kelly is captured and tortured, along with her husband, and she wonders if they will make it out alive this time. They are rescued by a group led by a woman Kelly helped many years in the past. One she never thought to see again. They are taken to a secret enclave in China where Kelly meets more people from her past.

After a long recovery, Kelly and Jim are strongly encouraged to leave the safe haven and make their way back to the states. Their enemy has found them.

During their travels, Kelly is separated from her husband when he is sent off to a hospital. She must endure a long strenuous journey on foot across Tibet with only a wise Buddhist monk as guide and companion.

Kelly is a very tough character, but will she make it home to her husband? 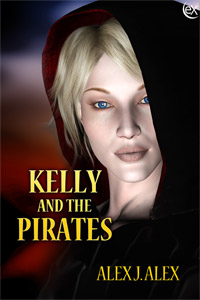 Kelly and the Pirates

Kelly kicked Jim, her husband, under the desk.

“Don’t worry. I find your battle scars more attractive than her hooters.”

She giggled softly. “I’ve got plenty of them. Battle scars, that is.”

“Your hooters are nice too.”

The woman at the podium, wearing the rank of a Navy lieutenant, was supposed to be an expert on her subject. She was tall and dark complexioned with long, straight black hair. Her most distinguishing feature was her breasts. It was painfully evident that she wasn’t wearing a bra underneath the green t-shirt, and she really didn’t need one. Behind her back, men called her Bazooka Betty. Her real name was almost as bad—Elizabeth Moretti, or Betty Moretti for short.

Kelly, Jim, and their team were aboard the supercarrier, USS Nimitz, to learn more about piracy. Lieutenant Moretti was the expert leading this lecture.

“Have any of you ever actually run into any pirates?” she asked, looking around the room.

“Uh,” Kelly wasn’t used to speaking up among strangers. “Yes.”

“Yes, what? Do you know something about pirates?”

“Well, yes. I suppose I do.” Kelly didn’t like the way Lieutenant Moretti was talking down to her. “Actually, I ran into a whole boatload of them.”

“Uh,” said Kelly. “Well, it was a couple of years ago. Off Da Nang, Vietnam. I was on board a small Chinese fishing junk, and after a rather violent storm, we came upon a speedboat that was foundering. We rescued the men, but they insisted that we tow them into Da Nang. The captain refused. The junk was unpowered, sail only, and we didn’t want to enter Da Nang anyway.”

“Hm. And how many of these pirates were there?” Her attitude and tone of voice indicated that she was taking Kelly’s story with a grain of salt.

“I guess there were about twenty of them. I don’t remember exactly.”

“Well, I shot most of them. With an M-1 Carbine. I stabbed a couple. I shot the ringleader, who had a gun to the captain’s head. I shot him with a .38 Colt. Oh, and I fed one of them to a shark. The shark would have gotten me, too, there was a lot of blood in the water, but the captain pulled me back aboard. I had to kill them all. It was us or them. They weren’t really pirates, I guess, they were really smugglers.”

Lieutenant Moretti’s mouth hung open. “You did this all…by yourself?”

Jim, and the other men who knew Kelly, were smiling at her discomfort.

“What were you doing on a Chinese fishing junk off Da Nang? I thought you were a pilot.”

Jim stood up. His old injury made him limp slightly. “Lieutenant, this is Lieutenant Commander Kelly Winchester. You may have heard of her.” He sat down again. “She’s done a lot of things you wouldn’t believe if I told you. Most of them are classified.”

Lieutenant Moretti shut her mouth. She nodded. “Commander,” she laughed uncomfortably, “perhaps you should be teaching this course.”

“Oh no,” said Kelly. “I don’t know much about those real pirates down around the Horn of Africa. I came here to learn as much as I could from you. Have you ever run into any of these pirates?”

“Uh, no. But I have studied them. I’m a researcher.” She was regaining her composure. Kelly’s reassuring attitude helped.

“What motivates these guys?” asked Kelly.

Moretti was back in teacher mode. “Ah, good question. It appears that these men are strictly in it for the money. Most of the ships they have hijacked and held for ransom were easy marks. They were unarmed, and the crews had all been told to not resist. But now it has gotten out of hand. They are going farther afield and attacking bigger ships, even cruise ships with hundreds, even thousands of passengers aboard. So far, our countermeasures have been effective, but the pirates are still demanding enormous sums of money, both as extortion and for ransom, and doing it quite successfully. There is a disturbing trend, though. Certain radical Muslims would like to turn piracy into a tool for jihad. If that happens, we might have a much more difficult enemy to deal with. As long as it’s only money they are after, all we have to do is make it unprofitable, or too dangerous. Jihadists, as you all probably know, can’t usually be bought off, or scared.”

Kelly raised her hand again. “Why don’t you go after them on their own turf, on land?”

Lieutenant Moretti looked at her and smiled. “That’s why you’re here. We want to do that very thing. We understand that you,” she looked around at all of them, “are the only ones who can do it.”

Jim looked around. Most of the expressions were grim. “They usually come to us when everything else fails. I assume everything has to be kept hush-hush?”

“Figures. I suppose we could be charged as war criminals, or spies, if we’re caught.”

“Okay.” He stood up. “Lieutenant, come with us. We have a training facility. I don’t want to conduct any classes or training here.”

“No buts. You were assigned to my command. Come with me.”

He looked around at the men. Kelly stood up, and the rest of them got to their feet. They headed for the hatch.

Kelly took Moretti’s arm. “They did the same thing to me a few years ago. Don’t worry, you might even enjoy where we’re going.”