Bestselling author Ruth Hartman is excited to release this amazing box set of her Love Birds Series. For a limited time, enjoy all five stories the collection. 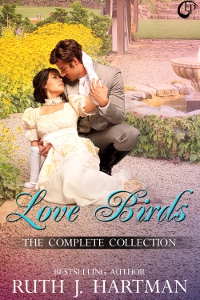 Love Birds of Regent’s Park
Lucy Ashbrook finds a pleasant diversion when she visits the Regent’s Park Bird Sanctuary to sketch the different birds that live there. Birds aren’t the only pleasing thing she finds, though. A certain Sanctuary worker, Oliver Barrow, has stolen her heart. But Lucy’s father will have none of it. No daughter of his will marry a common laborer.

Oliver Barrow loves everything about his work at the Sanctuary. The birds, the trees, the ponds… a certain young miss who mesmerizes him. Miss Ashbrook is beautiful and sweet and shares his love of birds. But Oliver has a secret that just might get in the way of anything more than friendship developing between them. And he can’t share that secret with her. Not yet.

How can Lucy convince her father of Oliver’s worth? That love isn't just for the birds?

The Unwanted Earl
Amelia Talbot has been issued a death sentence. At least it feels that way. The thought of marrying a man old enough to be her grandfather sends her into a panic. So much so that she sets off on a desperate search to find another man to marry her—quickly.

Conrad Croome, the Fifth Earl of Lofton, knows all too well that blackmail isn’t the way to form a marriage. How ironic that one Amelia Talbot uses a Croome family secret he’d thought long buried to force him to marry her.

Is Conrad doomed to a life of marriage based on an exposed secret, or could Amelia learn to love an unwanted earl?

A Courtship for Cecilia
Cecilia Fletcher yearns for true love with the man of her heart. A life of her own away from her demanding mother would be an added benefit. But in order to do that, Cecilia must live a lie, making it necessary to use a false name in order to hide a family secret.

Barrington Radcliff was betrayed by a woman who he thought loved him. Because of that, trust is hard to willingly give. When he meets pretty Cecilia Fleming, his heart wants to give her a chance. Something about her doesn’t ring true, but Barrington allows love to overrule his good judgment.

Can Cecilia and Barrington get past their hurt and secrets long enough to find true love?

Maid for Romance
Leah Hunter must choose between two men. Valet Daniel Barlow makes her laugh, fills her heart with delight, and answers her body’s desire for love. But Felton Kensington would give her a better life. Security. Prestige. And choosing him would take away the one thing that plagues her mind with worry and confusion.

Felton Kensington scoffs at the valet’s attempt to steal away Leah. With what Felton has to offer, he’s quite confident Leah will be his. In every way.

Daniel Barlow knows what he wants. And that’s Leah Hunter. He’s trying everything in his power to win her over. But competition from Felton Kensington is stiff. How can a valet compete with a wealthy gentleman?

His Lady Peregrine
Percy Radcliff has gone mad. At least that’s what his family thinks. Simply because he adores birds to distraction. If only there were someone with whom he could share his great love. Perhaps he’s found her in the woman he happened upon at the Bird Sanctuary?

Widow Georgiana Ollerton has finally met her match. In love and in admiration for everything avian. Percy, though odd, has a sensual quality Georgiana can’t quite explain but definitely wants to explore further.

The problem is Percy has once again gotten himself into a pickle. How is he to romance his lovely Georgiana when another woman believes him to be her long-lost husband? Will Percy be able to disentangle himself from the other woman before he loses Georgiana for good?