Rod Mason is a savvy businessman. He earned his fortune through hard work and commonsense practices--but his personal life is a different matter altogether.

Rod knows mixing business and pleasure can be detrimental to his reputation—but how can he resist the urge to throw caution to the wind when his attraction to Chet grows stronger every day? 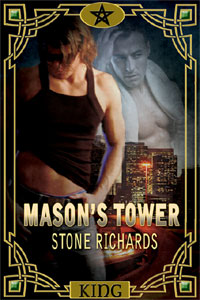 Rod handed the fifty-dollar bill over and took a condom from his wallet. Unzipping his fly, he released a long breath when his cock poked through the opening. Clothing rustled and the faint shadow directly in front of him released his belt. Rod glanced over his shoulder, scanning the far end of the alley and the back of the nightclub. He had insisted they go deep enough into the alley that should someone come from the back of the club, they wouldn't be able to see them in the darkness.

The bartender had sent Scotty over to him, a small man with a high-pitched laugh. One glance at him and Rod nodded approval and slid off the barstool. He looked clean enough, but then one could never be too certain of who he was fucking. He fingered the tube of lube in his coat pocket and reminded himself that he had to be fast so he could return home at a reasonable hour. He had early appointments and people would question if he didn't show up. His brows rose. It wasn't likely that he and Scotty would get it on more than once—since he wanted fifty dollars a fuck.

"Are you ready? Do you have lube?"

The stench of liquor and cigarettes wafted to Rod's nose when Scotty spoke, a wretched reminder that he was paying a stranger for sex in an alley. Son-of-a-bitch! Could things get any worse?

He ripped open the condom and rolled it on his hard cock. He was so aroused that his balls had begun to ache. "Yeah. I have lube." He took the tube from his pocket and squeezed a few drops on his fingers, then rubbed the condom, coating it. He reached for Scotty and his fingers touched a warm buttock. He pulled his ass against his crotch and made the first contact with his cock. He sucked in a deep breath, momentarily savoring the heat from Scotty's body.

Pushing in, he listened to Scotty grunt, then dug his fingers into his bare ass cheeks and began thrusting. He closed his eyes, trying to pretend that he wasn't in a dark alley with someone he just met. Sweat popped out on his forehead as he drew near his time.

"You're big," Scotty said, his voice a low rasp. "Next time, it will cost you more."

There won't be a next time. Rod gripped Scotty's buttocks and increased his speed, lunging deep and nearly making him lose his footing. The orgasm hovered just on the brink, teasing him, making him pump faster, work harder to bring it about. A picture of Chet flashed in his mind, sexy, muscular Chet with sun bleached hair and ropy abdominals.