Callie has a weakness for dark and dangerous men. It’s small wonder she falls so quickly for the one that walks into her café one stormy night.

Nicholas has had centuries to come to terms with the fact he can never have happiness. His chivalry is a weakness which led to his being born to darkness, and he’s paid many times for his mistake. He knows it would be stupid to let himself feel anything for the sexy red-head behind the counter.

Yet desire is stronger than either mortals or vampires can understand… 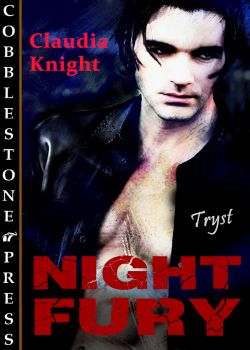 Callie’s eyes widened when he strode in.

His gaze met hers. His eyes a black so bottomless, she felt herself drowning in them. Black leather jacket, chin-length black hair, the dark stubble on his chin—all made him the epitome of a scrumptious, dangerous, and potent male.

He sat at the counter. She poured the requested coffee, her eyes never leaving his.

His voice interrupted her thoughts.

“I met the woman at the bottom of a hill I had never climbed.

“She was probably two score years or thereabouts, and had obviously not had an easy life. Sadness clouded her eyes, but hope shone there as well. I grabbed her hands as she stumbled in front of me, and I felt the calluses hard work had wrought. She said nothing—only looked at me.

“‘Are you all right, madam?’ I asked politely, wanting to be on my way, yet not wanting to appear to rush off.

“‘My children,’ she said softly. ‘I had to...’ The words, once spoken, increased the sadness in her eyes. ‘I will wait here.’ She moved to sit on a boulder on the side of the road.

“Mystified, I looked at her for a long moment.

“In the silence I heard screams of terror carried faintly on the summer air... Screams and the hint of smoke.

“I looked to her no longer, but broke into a trot up the hillside, toward the sounds. Halfway to the summit, I stopped; a divergence led to the left, and the well-used path continued onward. As I stood in silence, the screams came again, from the left.

“Some say man’s foremost instinct is self-preservation. A strange feeling told me to run away, as far and fast as possible. I ignored it and hurried on toward the sounds.”

He paused a moment, just looking into her eyes. A part of him already wondered if he was again ignoring his instinct for self-preservation. Something about the woman in front of him lowered all his defenses. Hence, here he was, spilling his story while all he wanted to do was lose himself in those stormy gray eyes.

He continued with an effort.

“My view was blocked by the curve of the cliff itself, for here the way led between two steeply sloped sides of the walls. As the way opened again, I saw a small hut set with its back almost against the hill, in a little vale too small to sustain more than a few sheep and some vegetables. It looked well kept—except for the quantity of smoke belching from the chimney.

“I hurried up, broke through the door without a thought, and stopped in the doorway. Three beautiful maidens met my gaze in mute surprise. They were in no immediate danger from the fire, other than the fact the room was rather hot. A large quantity of kindling burned in the fireplace. It would soon spread into the room.

“No—the danger was all three were tied to various pieces of furniture. The fact none of them looked as though they had been screaming in terror did not strike me then.

“The one who looked to be the oldest was seated calmly in a chair, her hands bound to its arms and her feet to its legs. Her bold blue-eyed gaze entreated nothing—only assessed. The second sat on the floor, next to an old iron stove. Her hands were tied to its base and her legs simply tied together. She tossed her raven tresses in disdain, even as she struggled with the knots.

“The last was but a child. Her red-gold hair glimmered in the light of the flames as she lay tied to the bed. She was the only one who looked afraid.”

Callie was still motionless, but her thoughts were spinning. The sound of his voice combined with the scent of him made her pulse race. Yet there was something else, too. The story he wove was compelling enough, but she felt as though she could actually see the three females. If she closed her eyes, she knew she would smell the smoke heavy in the air and hear the echoes of screams. Was it just her imagination? Or was it something else? His voice pulled her back to the present as he continued.

“‘What monstrosity is this?’ I shouted, moving into the room and drawing my sword.

“I advanced to the child first for I believed—rightly as it turned out—the eldest would be something to be reckoned with. Swiftly, I untied them. The first fled, grabbing a tattered doll on the way out. The second muttered barely audible thanks and rushed after the youngest.

“Those blue eyes seemed to drink in my soul as she leaned toward me; I still knelt with the last of the rope in my hands. I remember her golden hair tumbling into my face, the scent of lilacs and ocean spray.

“‘I have waited for you,’ she murmured. Then her teeth were against my neck and the world faded. When I came to my senses, I was no longer human. I was reborn a predator, an immortal, a vampire.”

Callie held her breath, her eyes still focused on his face.

His dark, dark eyes seemed to grow even darker, deepening the shadows in the room. The silken fall of black hair over his shoulder begged to be touched. The chiseled features and brooding aura made her heart beat faster—but his story...

There she had been, wiping the counter, lazily thinking of her next painting. Then he had walked in. The café opened late, but they rarely had any but the regulars on a night like this. She’d tried often to talk her grandmother out of the late hours.

As soon as their eyes met, she knew.

He was hers. He was what she had been waiting for.

She had always had a thing for the dark and brooding males. Had gotten into plenty of trouble because of that... But she always knew her way out, always knew she could handle them. Could she handle him? The thought brought a tinge of pink to her cheeks as an image popped into her mind of exactly how she would like to handle him.

At the counter, he stirred the still-full cup of coffee she had set in front of him.

His head tilted forward slightly; his hair partially obscured his face. The urge to reach out and brush it out of the way was so strong she had to clench her hands to still them.

His eyes drank in hers, “Knowing this, you still want me?”

Her mind went blank for a moment. She could see the desire and something like tormented hope in his eyes. Something about the way he held himself spoke of restraint at a great cost. Yet the thought he could read her mind was a little more than she was prepared to handle.

Her gray eyes met his again, “You know my thoughts?”

In the deeper recesses of her mind, she wondered exactly what she was supposed to know. Did he really expect her to believe he was a vampire?

His smile was feral, “I can smell your desire, taste it in the air around you...”

She thought she felt the moment when his control slipped. Was it that, having given his warning, he now felt the responsibility for the choice had shifted to her?

He held out a hand to her. There was no choosing, only certainty, as she put hers into it.

They left the café door swinging in the wind. He scooped her up in his arms. She buried her face in his coat as the chill wind robbed her of warmth. Soon they were moving, faster than she could understand. Darkness and blessed warmth enveloped her.

He set her gently on her feet and moved away. When the lights came on, she looked around in surprise. The apartment was gracefully modern, with simple furniture, and what appeared to be a functional kitchen.

Again, she found herself wondering if his story was truth.

His voice in her ear sent chills down her spine. How had he gotten behind her without her hearing? She felt the solid length of him against her back and desire shot through her. What was wrong with her? She was twenty-five and had sufficient experience to rein desire in to an acceptable level.

“There will be no reining in of desire with me, my beauty.” His voice caressed as he moved his hands to her waist.

The warm coils of desire wrapped even more firmly around her.

What is wrong with me?

This time, she was too caught up in desire to notice.

He slid his hand down to cup her mound and used the other to cup a breast. Liquid heat blossomed inside her. Somehow, he was able to use one hand to undo the top buttons of her shirt, and then slide it in to cup her breast. He slid the other into her jeans and used that hand to pull her back against him.

She caught sight of their reflected images. Vampires had images?

He looked up and caught her eyes in the mirror. He smiled. It was his first for the evening. The smile of wicked delight sent chills down her spine.

Holding her gaze, he undid the buttons of her shirt and slid it over her shoulders. Next, he loosed the clips from her hair so the long length of auburn fell to her waist.

He slid his hands through her hair. “So rare to see a modern woman with hair of this length,” he mused.

She was almost unbearably turned on. His sensuality was stunning. Every move he made excited her. The jeans went next. She stood in her black lace panties and bra, while he still held her gaze.

“You are so beautiful...” His voice caressed her as well as his hands. “I am going to explore every part of you.”