Nicolas has always had a secret desire for his closest friend Jackson but he can never act upon it. In Salem of 1692, men do not love other men. Nicolas suffers with his secret...until the night he finds Jackson inside his house, waiting for him.

Jackson tells him that he has been chosen by a Goddess to be one of her protectors and that there is only one way to quicken the magic that lies dormant inside of Nicolas: They must lie with each other.

Will Nicolas give into his desires?

Or will he forsake his magic? 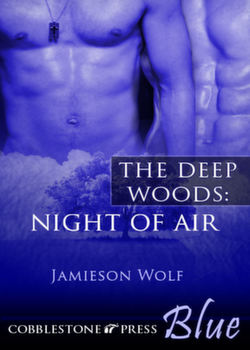 The trees whispered as they moved through them.

They whispered to Nicolas, filling the night with sound to match the silence. It was soft and eerie as he brushed past branches, seductive like the night that filtered through the leaves.

Though they were only a small group of five men, the whispering of the trees seemed to grow as they neared a small clearing in the woods. Nicolas had never been this far deep into the trees before. Like most people in Salem, he didn’t go too far in to the shadows of the forest. Who knew what lurked within the darkness?

That was before, however—before he had been approached by his best friend, Jackson, who had surprised him earlier that evening. He had returned home to find Jackson in his study with a fire already lit. It was quite the breach of etiquette to find someone waiting for you in your home without being invited in.

Nicolas was about to ask what Jackson was doing in his home and how he had gotten in when he caught the look on Jackson’s face, shadows from the fire flickering across his skin.

Instead of the question that Nicolas wanted to ask, he spoke another aloud: “Jackson, whatever is the matter?”

The look on his friend’s face hurt Nicolas more than Jackson could ever know. He had carried a flame for Jackson inside of him for so long it was almost as natural as breathing. Nicolas knew that he loved Jackson as one did not love another man, that no woman would ever do for him. His heart belonged only to Jackson, to the deepness of the gray flecks in his blue eyes and to the shiver that Jackson’s laughter sent along his skin.

The look on Jackson’s face was one of the utmost misery; Nicolas wanted to take his friend, the man he loved, into his arms and hold him, but he couldn’t do that. Men did not love other men, this much was clear. Nicolas knew that he could only love Jackson from afar, that a wish in the night was all it could ever be.

Instead, Nicolas sat down across from his friend. Jackson looked up at him with eyes that were glassy from unshed tears. “I’m so sorry.” His voice was full of sorrow.

Nicolas was perplexed. Surely there was something wrong with Jackson. Why was he apologizing to Nicolas? “Why are you sorry, sir? You have done me no wrong.”

Jackson shook his head. “You don’t understand, and I don’t have time to tell you everything. They told me that she chose you, that she marked you, and that it would show on your skin.”

Nicolas suddenly went cold. He had indeed awoken upon the morning to find a small five-pointed star inside of a circle on his skin. He had told no one about it, not even Jackson, his closest confidant. His parents had passed on when he was younger, leaving the home to him and his sister. She had married the following year and was now living with her husband.

Without telling Jackson, there was no one to tell. So how did Jackson know about the mark that rested just above his heart, as if inked there?

“I don’t know what you’re speaking of,” Nicolas said.

Jackson shook his head again. “They are never wrong.” He swallowed thickly. “She is never wrong. I just hoped that it would never be you. How I prayed it wouldn’t be you.”

A sharp needle of fear was growing inside of him. What did the mark on his skin mean? “Jackson, you’re beginning to frighten me.”

Jackson swallowed again and looked at him, his eyes changing from gray to blue in the fire light. The tears that had remained unshed finally slipped along Jackson’s cheeks, leaving trails that shimmered in their wake.