Patrick is an artist who wants to paint the perfect voluptuous woman, and he thinks he might have found her in the form of Victoria. Victoria thinks it's just going to be another life class assignment, but as the initial sketches progress, Patrick starts to find he has a desire to really paint Victoria. And it isn't very long before she becomes impressed with his brushwork.

To Michael, a writer living in Paris, Mamma Nana is a strangely exotic and compulsively attractive Jazz singer. He becomes entranced by the large, dark skinned woman, much to the anger of Maxine, his girlfriend. But when Mama Nana's birthday party ends and the bar clears, the only people left are Michael and Nana, and Mama don't take no for an answer.

Two for One by Kitti Bernetti

Sometimes an offer seems too good to be true, and sometimes the person offering it doesn't come through with the goods. Which was Craig's modus operandi - all flirting talk and no action. That is until two women decide it's time to take control of the situation and hold him to his promises.

Some people go to a gym because they want to, while others go because they feel they have to. Or in this case in order to please Roger by losing a few pounds here and there, even though Julia really doesn't want to. But then, in the showers after a round of aerobics, Helen shows Julia just how enjoyable a really professional workout can be.

The Ivory Tower by Izzie French

Universities can be dry and dusty places, and so can the professors and the dons. Which was why researcher come personal assistant Charlie loved it when her new office turned out to be at the top of one of the towers. Then Professor Markham calls by and before long the two of them are discussing more than just extra-curricular activities. These stories have also been published in Ultimate Curves ISBN 9781906373788 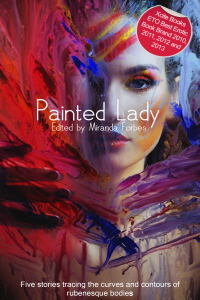 “How about this?” Virginia suggested. She shifted up the chaise longue to let her head loll back over the rest, cupped one of her heavy full breasts so that the nipple peeked out between her fingers and let the other hand rest between her barely parted thighs.
“Yes,” he said, clearing his throat. “Yes, that’s perfect.”
As he started to draw again, she closed her eyes, slipped her forefinger between her labia and began to circle it on her clit with the tiniest of movements. Her moist flesh felt like wet silk and her clit throbbed and swelled under her fingertip. She closed the fingers of her other hand, teasing her nipple, and felt a spark shoot down her body to her groin.
She heard his sketching falter, then stop. Opening her eyes, she saw he’d put the sketchbook aside and was watching her, making no attempt now to hide the bulge in his trousers.
She let her legs fall open, showing herself to him, and dipped her first two fingers inside herself before returning them to her clit. Lifting her head, she looked at him. “Come here,” she said.
He didn’t need asking twice. Kneeling beside her, he took her other breast in his hand and drew her nipple into his mouth, first running his tongue around it and then sucking it until she groaned with pleasure.
He kissed his way from her nipple down the swell of her breast, pausing to nuzzle for a moment in the centre of her cleavage. Virginia moved her hand out of his way, and he ascended the other breast, circling it with tiny kisses before covering it with his mouth as she cradled his head.
He was stroking her now, his fingers slowly brushing over the deep curve from her waist to her hip, then onwards, down the outside of her thigh, across her leg and back up the inside, towards her still-rubbing fingers.
“God, you’re wet,” he breathed, as he touched her. “You’re the most sensual woman I’ve ever met.”
Gently taking both her wrists, he returned her hands to cover her breasts and then moved to the foot of the chaise longue and parted her legs further. Starting just above her knees, he pressed a kiss to the inside of each thigh, slowly working his way up until she felt his lips brush over her clitoris, and a shudder rippled through her whole body. One more touch, she thought, and she’d be coming harder than she’d ever come in her life.
He stopped and Virginia almost screamed in frustration.
“I want to paint you,” he said.
“What, now?” She couldn’t believe it.
“Yes. Trust me.”
She watched as he quickly shed his clothes then picked up a palette and loaded it with paint. Rummaging in a jar crammed with brushes, he picked one out and dipped it into a jug of water before coming back to the chaise longue.
Virginia was transfixed by the sight of his cock bobbing towards her. It wasn’t much longer than the average six inches, but its girth was impressive. She imagined how it would feel stretching her open as it nudged inside her, and her hands strayed downwards again.
“Wait,” Patrick said. He was standing over her now, palette balanced in one hand, brush in the other. Before Virginia could ask him what he was doing, he touched the brush to her skin and painted a long curl of vivid blue, starting at her collarbone, swirling around her breast, over her stomach and coming to rest with a delicate flourish at the top of her bikini line.
“There’s no finer canvas than a woman’s body,” he said, washing the brush and then mixing a brilliant green on the palette.
Virginia lay there and let his brush stroke her, a thousand times more delicate than his fingers had been. The trails of cold paint brought her skin up in goosebumps.
“There,” he said, stepping back to admire his work. “Come and take a look.”
Taking her hand, he helped her up and led her over to the floor-length mirror in one corner of the studio.
Virginia gasped. The swirling pattern he’d painted over her skin enhanced her figure, her hourglass shape glorified by its wrapping of painted ribbons.
“See how beautiful you are?” he asked.
Virginia nodded.
He turned her round and kissed her, softly at first, then growing into something harder, greedier. Without lifting his mouth from hers, he pulled her back to the chaise longue and sat on it, positioning her astride his lap.

The Watcher
Miranda Forbes
In Shelf
$2.99 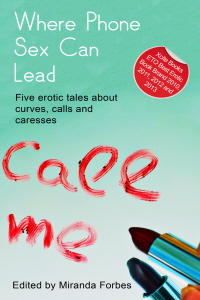 Where Phone Sex Can Lead
Miranda Forbes
In Shelf
$2.99