The Sword and the Rose 3

It is April 1622, and Magdalena Lorca has newly arrived at the Villa Sant’Angelo in eastern Spain. She is maid and chaperon to Senorita Elena de Cellorigo-Borja who has traveled from Seville to meet her Valencian family.

As Magdalena is integrated into the household staff, she gradually gets to familiarize with the surroundings. The Estates located near the village of Cullera are extensive and boast formidable orchards of citrus and stone fruits, but the family’s pride is their vineyards.

When Magdalena meets the wine-master, Joquim Alvares, for the first time their mutual attraction is immediate and develops into a strong friendship.

But will Elena’s impetuousness and selfish attitude towards her maidservant threaten to jeopardize any chance of romance for the young woman?

The only hope Joquim and Magdalena have will depend on whether Elena’s change in circumstance causes her to mellow when she is courted by the Estate’s heir.

The Sword and the Rose 3 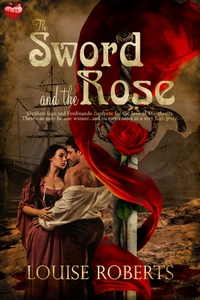 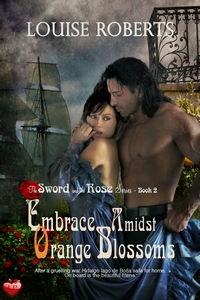 The darkness of the villa’s storage cellars was kept at bay by a single lantern which threw a yellowish light. As Joquim stacked the wine casks carefully in their assigned spaces, he reflected on his time at the villa. Although he had flirted with one or two of the maids, he had never really been serious with any of them. Earlier that morning, though, something inside him had changed. His meeting with Magdalena Lorca was the cause. Joquim stopped momentarily from his chores and stared blankly at nothing in particular, while in his mind’s eye he conjured up her beautiful face. Framed by long dark curls of hair which cascaded over the partial nakedness of her shoulders, her skin was a delightful olive complexion. She had sparkling brown eyes beneath thick eyebrows and behind long lashes. Magdalena was younger than him, guessing she was perhaps ten and nine years of age. He forced himself to remember the rest of her body. Although the clothes she wore were plain, they did not disguise her shape. Joquim closed his eyes and vividly saw that despite her petite frame she was beautifully proportioned with largish breasts and hips. He felt his pulse quicken with excitement from the brief recollection and to his delight realized his manhood had stiffened.

I must get back to work, he thought snapping back to reality, and made his way up the steps to the outside courtyard to fetch another cask.

The sound of excited chatter and laughter made him glance up at the open verandas which wrapped around the entire upper level of the villa. His heart leaped for joy as he snatched sight of Magdalena briskly walking with two other young women in the direction of the servants’ quarters. Best of all was when she turned her head and smiled at him. He waved.

As the women disappeared from sight, Joquim heaved a cask onto his shoulders and descended once more into the gloom.

“SeñorAlvares?” Magdalena called from the top of the steps. She slowly descended leaning a shoulder against the wall whilst her eyes became accustomed to the dimness. She carried a small loaf wrapped in cloth and a wooden bowl of pottage.

Joquim stepped forward carrying the lantern, a smile appearing on his lips.

“Welcome to my dungeon,” he said lightly.

“Señora Marina asked me to bring you some luncheon,” Magdalena said and placed the food down on an upended wine cask.

Joquim set the lantern next to it.

“I thank you for your consideration,” he said. “Would you like to sit?” he added pointing to a small stool.

Joquim watched as she looked about her. It was a sight to behold. He too had been impressed by it when he had first been shown it. The storage room was impossibly vast.

“It is much bigger than you can imagine,” Joquim told her. “Because it is so cool down here, even on the hottest days of summer, everything is stored here. There are vats of fruit, sacks of flour, all sorts of perishables, and of course wine.”

“How big is it?” Magdalena asked.

“Come … let me show you,” Joquim said picking up the lantern and stretching out his arm in order to light up the way before them.