Erick's job is boring. Long hours. Hard work. There's only one thing that drives him to continue showing up: Willis. Little does he know, he's not the only one interested in a little after work activity.

When they both volunteer for an out of town trip Erick and Willis will find themselves in the mercy of their mutual attraction. 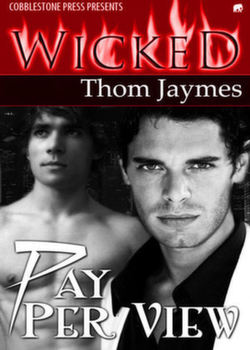 The meeting was just as boring as expected. Erick stared blankly at the slideshow that was being projected on the wall. The man leading the meeting, some pale little thing corporate had sent, had a voice that reminded him of the guy from the eye drop commercials. Trying to pay attention got to be almost too much for him handle.

Erick looked about the room. Every member of management sat around the large, rectangular table. Even Dallas Holloway, Site Manager, and the most annoying human being on the face of the earth. He was about as important as one could get within the specific branch of Titan Plastics for which Erick worked.

He snuck a peek at Willis, who sat across the table. He looked at some papers on the table before him, probably just as bored as Erick.

Erick thought for a moment about what the papers concerned, but that idea was quickly replaced by a new wondering of what Willis’s chest looked like under that loose, green button-up he wore. What would it feel like to have their bare skin pressed against one another…?

Erick shook his head, trying to refocus his attention on the eye drops guy, who now talked about some expansion project. Apparently, the company had just opened a new plant in some rural part of Ohio.

“So,” the man said, clapping his hands together. “We’re going to need two volunteers to go to the new facility and run a few training programs with the inexperienced crew members we’ve hired.”

A smile etched itself across Erick’s face when no one offered to go.

“Me, too,” Erick said, surprising himself.

“Excellent!” Holloway barked his irritating laugh. “You two were on the line until recently, so it makes perfect sense to send you. You still remember how to run the machines.”

Erick frowned, annoyed by the comment. He glanced at Willis, surprised to find him looking back. He quickly changed his expression to a smile.

“Okay. Well, you guys are going to be leaving on Monday. It’s only for four days, so you’ll be back home before you know it,” eye drops guy said, not really giving them any time to change their minds. “That’s pretty much the end of what needed discussed here today. Any questions?”

No one said anything.

“All right. Great meeting, everyone. I’ll see you all next month.” With that, he turned off the projector and collected his materials. Holloway jumped to his feet to assist.

Everyone else silently filed out of the room. Erick ended up walking beside Willis down the hallway that led to the parking garage.

“Pretty good. Getting tired of these Saturday meetings.”

Erick smiled. “It would help if we had more lively discussions.”

“Yeah.” Willis laughed. “That guy’s voice was putting me to sleep.”

They walked into the garage, stopping just inside the door. The other members of management rushed past, toward their respective automobiles.

“You’ve never been to Ohio?” Erick asked once they were alone. “It’s like an hour away from here.”

“I’ve been there before,” Willis admitted. He lit up a cigarette and took a quick puff. “I don’t really know why I said that. I guess I was just nervous or something.”

Erick laughed. “Yeah, I do the same thing sometimes. Blurt things out and then wonder why in the hell I said them.”

“Well, I’m going to head on home, maybe get some sleep before getting started on my lawn.”

The thought of Willis working out in the hot sun brought a smile to Erick’s face. He could just see him pushing around the mower and working up a huge sweat. Willis would probably drench his shirt and end up tossing it aside. You could come over and take care of my lawn…

“What’s with the smile?” Willis asked, raising an eyebrow.

Snapping out of his daydream, Erick laughed. “Oh, nothing. I was just thinking about something I saw on TV the other night.”

“Cool.” Willis took another draw of his cigarette. “I see you Monday.” He walked to his green Mustang, got in, and started it up.

“Yeah, see you then,” Erick called after him.

Erick tried to not make it obvious that he was watching him go.

Idiot. Something I saw on TV? God…

“Sorry I’m late,” Erick said as soon as he slipped into the rental car beside Willis. It was a black BMW. Erick didn’t know the exact model, but the way the leather seat caressed his ass the moment he settled made him wish he had one instead of his old Buick. “Traffic.”

Of course, there’d been no traffic. The truth was he’d spent too much time getting ready. He was excited about being alone in a vehicle with Willis, and he wanted to look his best.

Willis adjusted the rearview mirror. “He just made it a point to stop me before I put my suitcase in the car. Gave me a little pep talk, you could say.”

Willis rolled his eyes. “He’s such a self-important moron.”

A laugh escaped Willis’s throat. “He probably has a tiny one.” He must have noticed the confused look on Erick’s face because he added, “A prick, I mean.”

“Oh!” Erick grinned. “Careful. He could have the car bugged.”

“I wouldn’t put that past him.” Willis sighed. “You ready to get going?”

Willis started the car, maneuvered out of the parking garage, and pulled out onto the street. “You hungry or anything?”

“No, but I guarantee I’ll have to piss soon.” Erick said. “It never fails. It’s like a road trip curse.”

Willis pointed to his Styrofoam coffee cup. “You can always use that.”

I’d love to whip my cock out in front of you just so I could gauge your reaction. Erick laughed. “Yeah, I guess I could.”

Willis turned on the radio, tuning into some station that played country music. “This cool, man?”

“Yeah,” Erick lied. “It’s fine.” He hated country music, but learning that Willis liked it interested him. He wondered what else he liked. All that time together on the assembly line didn’t really give him much perspective into Willis’ preferences about a lot of things. Although, he did know that Willis saw every movie in which Mel Gibson appeared.

“We’ll take turns,” Willis offered. “Half an hour on my station, then you can pick one.”

“I wonder if this hotel has a pool.”

“Well, I hope so. It’s been a while since I’ve been swimming. I brought a couple pairs of trunks just in case.”

“A couple?” Erick asked, confused. “We’re only going to be there for two days.”

“Oh.” He thought about asking why Willis thought he wouldn’t bring a pair of his own if he had any intention of swimming, but decided against it. He was probably just being considerate. “Cool. Thanks.”

Erick turned his attention to the window, watching the scenery rush by and trying to push images of Willis in swimming trunks out of his head.