Cory Blindbarrow of Blindbarrow Crimefighting Couture, loves her work—from tailoring bulletproof fabrics to engineering concealed weaponry. Kowtowing to the over-sized egos of her superhero clientele? Not so much.

Her newest client, Theo Richelieu, aka Prometheus Man, can see five minutes into the future. Unfortunately, nobody believes him. He’s exactly the type that pushes Cory’s buttons. But he’s also quite talented at engaging (and disengaging) her buttons and zippers. As maddening as Theo can be, Cory can’t deny their supernatural chemistry.

When a sniper targets Cory’s colleagues, Theo appoints himself her protector. His know-it-all attitude soon has her ready to tattoo a bullseye on her forehead. If Theo is unable to convince the headstrong couturier she’s the sniper’s next mark, their happily ever after might never make it out of the design phase. 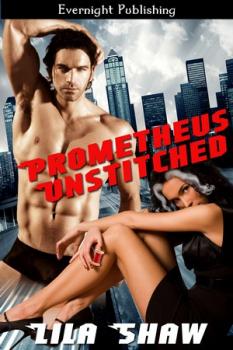 “Don’t do that,” Cory murmured. Her body had settled down from their romp on the floor, but his languid perusal threatened to re-ignite her.

“Like this?” Theo bent his head down and pressed his forehead to hers, one palm cupping her jaw and neck.

Cory’s lips formed an “oh” as reality returned and Theo kissed her. They didn’t stay in an “oh”.

His arms slipped around her and she felt her body move to mold against his. What was going on? Why was she so susceptible, so pliable to his will? Why did every part of her body gravitate to him, even her hair? She wasn’t sure she liked him, though her body seemed to be pushing for consensus on a great big affirmative.

“Identical to my vision,” Theo whispered before pulling away.

A whimper escaped Cory as the air cooled where his lips had been. Mortified by her betraying reaction, she raised a hand to her mouth, unable to meet his eyes.

“Your hair is darkening again,” he said thickly. He pressed his lips against first her right temple then her left.

Eyes wide at the implication, she pulled free of his embrace and snatched the hand mirror out of her desk drawer again. The dusky shade had begun to descend from her roots toward the ends, though traces of silver still remained. She spun to put her back to him, self-conscious of what she assumed the cause to be.

“My theory is correct, Cory; I just proved it. When you’re aroused … um, sexually, your hair turns dark. I knew I was a pretty good kisser, but the visual proof is beyond gratifying.” He chuckled.

Cory’s heart accelerated, her head pressurizing for a blowup. Of all the conceit. She spun to face him, her eyes narrowed to near slits of indignation. How dare he toy with her!

Theo took a step back. “Uh-oh…” He pointed to her hair. “I’m guessing I should have kept the results of my experiment under wraps a while longer.”

“What? Didn’t you see my reaction to your scientific observations in your foresight?” She drew her fists to her hips, ready for a full-on verbal brawl. “For all we know, your saliva is the culprit!”

“I didn’t kiss you in the kitchen. We didn’t even share the same drinking cup so that theory doesn’t pan out.” His eyes flitted to her hair, and he took another step backward.

Cory advanced and narrowed the gap. “The kitchen doesn’t count. That could have still been a trick of the light or just your premonition of my hair changing later.”

Theo shook his head. “It doesn’t work that way. I don’t get reality and future visions confused. They’re very distinct.” He suddenly broke into a grin. “Ah, I know what’s going on. You were lusting after me back then, weren’t you? I’m totally right about this.” He recovered the ground he ceded earlier. “You want me. You don’t want to want me, but you do, or at least your body does, so much even your hair is aroused by me.” Again he chuckled, loud and hearty. Between guffaws, he choked out, “Welcome to my world and that of every boy beginning at adolescence. It’s not so fun sporting evidence of desire, is it? Kind of embarrassing, eh?” The laughter grew in volume.

Cory wanted to throw a shoe at him. “Shut up! Your theory is ridiculous! I was not lusting after you! You’re such a jack-ash!”

“A jack-ash?” His laughter began anew. “Do you mean jack-ass?”

Cory’s mouth twitched into a frown. “I don’t use those types of words.”

“You just did…albeit with a lisp—”

“Oh, hush! You are such a conceited SOB!”

A Little Bit of Heaven (MMM)
Stormy Glenn
In Shelf
$3.99
Tweets by
sirenbookstrand