When he arrives unexpectedly in her thrift store, Anne has no clue something extraordinary is about to happen. Many somethings. And by the time she does, it’s too late. Because he’s become a part of her. A necessity to her. He’s become something she can’t live without. And then only one question remains. Can she trust him? 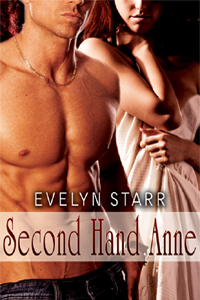 She had the strongest desire to tear her clothes off. And that made less sense than anything else. That and a nearly overpowering desire to fling herself to the floor at Hugh's feet, laughing shrilly and hysterically. Remembering how just the week before she'd put a sign out on the street proclaiming Our clothes are half off…come in and see us!

Hugh smiled again. More intensely around the dimples that set her heart to fluttering like nothing normal should ever find itself fluttering.

"What?" was all she could say. Having no memory of what he'd asked half a second before or what she'd said to him the half second before that, it was the only thing she could think to say.

"Been in business here long?"

"I…" Shuddering in the grip of the heat, the chill and a newly risen tension of need that swirled and spiraled through every private part of her, Anne wrapped her arms around herself and turned away. Toward the windows that faced the street. As if any amount of wrapping of arms or turning away to gaze out at the relentless emptiness of downtown Hargrave in the middle of a business day could ever protect her from what this man…this stranger…was doing to her!

"Seven years?" he repeated. Laughing like he knew exactly what he was doing to her.

Because of course he's doing it deliberately.

"And is business good?"

Why would he ask that?

Anne stood up straighter. Tried to scowl, and knew she didn't do a very good job.

"I mean…" For the first time, Hugh seemed disconcerted. Oddly disconcerted. Like he'd just given away one of those strange secrets she knew he was hiding.

"If you're here to buy the place…" She fixed her gaze on the street outside the windows. Relentlessly fixed it. "That was last year. Before I decided I might just be going to m…make it af…fter…"

He moved close to her again. Too close, just like every time he moved close. "And now?" he asked, his tone making it clear he meant to be very, very careful about what he said from now on. "Business is good for you, now?" Leaning forward more, he brushed her shoulder. Lightly. Slightly. Brushed something…the enormous width of a stray hand, maybe…against the summer-bare top of her shoulder.