As Shaylee faces the world on her own will she be able to do it and still hold on to her magic?

Without Gorm, Shaylee is lost and alone in a coastal city where her dryad magic is weak and her friends are few. It’s time to move on but can she still move on and keep her dryad powers, or will she be rooted to one spot by the ‘life oak’ that holds her magic? 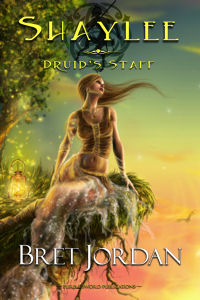 Shaylee took some branches from a pile Oren had gathered and fed them into the flames, then she crossed her arms over her chest and looked out at the forest. All was dark outside of the fire’s ring of light, but her ears picked up the nighttime noises. In the distance, beside some unseen pond, a frog croaked into the darkness for a mate. A bat chattered at the night, using the noise to track a moth.

A shiver ran up Shaylee’s spine as she closed her eyes and reached out with her senses. The forest came alive with life. Insects zipped through the ghostly green glow of leaves like sparks from the fire. A flying squirrel clung to the side of a tree as orange and bright as any lantern. A mound of coals glowed a hundred yards from the camp where a deer and her fawn slept.

She swept her senses to the left. Something moved through the trees like a miniature sun. It flew above the ground and zipped through the forest, changing directions like a bat.

Shaylee opened her eyes as the object buzzed into the camp with a whirring, locust-like roar. It darted to Oren, then Calhoun, with the speed of a hummingbird. Sparkles of glitter dusted Oren’s face as it passed. As the silver sprinkles touched his skin, they faded like tiny cinders in the rain.

She spun around and tracked it with her eyes as it circled. Before it could completely circumvent the camp, it darted toward her and stopped an inch from her nose.

A beautiful green-eyed woman no more than six inches tall hovered before her. A fairy.

Waves of air buffeted Shaylee’s face as the fairy’s wings fluttered in a blur of motion. Small breasts rested on her thin frame, flattened by the backward arch of her spine. Her blonde hair resembled cornsilk and fluttered in the breeze created by her wings. Thin strands of it covered her back and whipped before Shaylee’s eyes. The fairy’s legs crossed at the knees, hiding her womanhood.

Shaylee had dreamed of fairies since she was a little girl. A legend of old whispered about in the deepest forest by curious children, stories forgotten as age and responsibility stole their childhood and left them with a less imaginative reality. Shaylee wanted to reach out and grab her, to feel her and know she was real, but before she could do anything, the creature darted away into the forest and disappeared.

She stared after it with her mouth open, speechless and frozen in place with awe. Amazement rooted her feet to the ground. One of her dearest dreams had come true.

Seconds passed and still Shaylee hadn’t moved. Finally, the locust roar returned. The distant buzz grew until it sounded like a dozen hummingbirds fighting against the wind. Again, it darted through the trees and stopped inches in front of Shaylee’s face. The fairy jerked her head toward the woods and darted away. Though no words were spoken, the fairy’s request was obvious and universal in interpretation. Follow me.