She Loves Me: a Collection of Lesbian Erotica

Together in one volume, a collection of Leigh Ellwood’s scintillating, sexy tales of Sapphic play.

Share: Desperate to achieve release with a little help from her trusty toy, Marissa tries to be discreet and not disturb her roommate. Nell, however, is quick to convince Marissa to change her plans...and to share more than her battery-operated pet.

Share Some More: The sequel to Share. Marissa enjoys her friends with benefits arrangement with roommate Nell, but lately the twinge of jealousy makes it difficult to have fun. Between a professor persistent on employing her for dubious acts and her jealousy toward the latest object of Nell's affection, Marissa wonders how much longer she can share herself. Will she stop, or risk it all to share her love with Nell?

Last Call: Dejected and depressed, Janet Stanton hopes her nightly walk will improve her mood. The end of the road leads her to her best friend and a shocking revelation that could change her life. Is Janet willing to take that important first step toward love, or will she miss the last call?

Where Angels Dare to Tread: October's Black Rose Festival comes to Dareville, along with a sexy party Carole Douglas can't wait to attend. While she hopes to catch more than a few interested looks with her skimpy angel costume, meeting the enchanting Bella Reeve has her ready to turn in her halo. Will the town's first Vamp Ball bring her love at first "bite"?

South of Sundance: Days before her sexy documentary debuts at a popular lesbian film festival, director Bebe Yasbeck is confronted by an old flame and conflicting feelings about the direction of her career and her assistant, Debra. Will her experience at South of Sundance provide her with the happy Hollywood ending she desires?

She Loves Me: a Collection of Lesbian Erotica

She found Bella lingering by a thick oak to one side of the building. In the distance people roamed the parking lot, perched on bumpers and hoods as the glow of red ash spots danced like demonic fireflies in the night. Carole thought at first Bella was talking to somebody on a cell phone and hovered a few feet away to give her some privacy, but after a few seconds she realized the woman hummed her Black Rose song to herself.

Suddenly she stopped and flashed Carole a vampire smile. “You look wonderful,” she said. “I love the trim and the wings.”

“Thanks.” Carole let out a short, nervous laugh. “Same to you. Totally demonic.”

Bella stepped away from the tree and obliged with a vampy pose. From the lot a man shouted, “Nice poem, Stevie Nicks!” and Bella waved a dismissive hand in response.

“You having a good time?” she asked Carole.

I am now. “Yeah, just getting some air. It’s a neon sauna in there.”

Bella set off, trudging deeper into the grassy field behind the VFW hall. Carole found it a challenge to negotiate the soft ground beneath her heels, but managed a decent cadence that kept her in pace with the other woman.

“That was a good opening,” she said. “Really set the mood.”

“Thanks.” Bella cast her a shy smile.

“So do you know Brady Garriston? That’s kind of cool.”

Bella crooked her neck back toward the building. “I know his drummer, he’s the one who got my ticket when the ball sold out. I didn’t know I’d be onstage until, like, a few minutes beforehand.”

“Yah.” She nodded vigorously, eyes wide. Carole caught their brilliance even as walked farther from the lighted lot. “The girl they originally had doing it didn’t show, and I had three minutes to memorize that damn poem. Good thing it was short.”

“I’ll say. You do pretty good under pressure.”

Bella came to a sudden stop, and Carole let a few seconds pass in silence so her vision could adapt to the dark. About two feet ahead of them, the weeping branches of a thick-trunked willow hung limp, unmoved by the breeze.

“You know where we are, don’t you?” Bella’s voice took on a secretive tone that sent chills down Carole’s back.

“We’re…behind the VFW Hall,” she said. “I’ve been coming here all my life for various things. It’s just a place.”

“You think so?” Bella moved to stand with her back against the trunk. Carole could clearly make out the other woman’s shape, especially her smooth skin exposed by the skimpy costume.

“I asked my friend why they were having the Vamp Ball here, when they could have done it in a bigger venue, or someplace with better acoustics,” Bella began, but Carole cut her off before she could finish.

“Wouldn’t make sense to do it in Virginia Beach. It’s a Dareville festival, and there’s really not a lot of places for a big event. Though,” she added, “I guess they could have done an outdoor concert at the park.” The open space would certainly have diluted the sensuality of the closed-in feeling the hall provided, however. Carole pictured the same group dancing in the grass at Dareville Memorial Park, stumbling in soft spots and rogue gopher holes.

Bella shook her head; her tresses flowed with the movement. “This,” she pointed to the ground, “is where the Black Rose lived. When they were planning this thing they went over some of the old town ledgers and maps, and according to one of the earliest censuses Rose Smith had a home on this plot of land.”

“No shit?” Carole looked around instinctively. “I’m surprised there isn’t a marker or something, as much as we commemorate Black Rose.”

“Maybe the town doesn’t want to encourage kids to hold rituals or other devilish activities.” Bella’s voice highlighted a playful gesture—fingers waggling as though to threaten a touch. Carole laughed in kind and wondered fleeting how those hands would feel kneading her shoulders or breasts.

“Since she’s not buried here, I doubt anybody would be able to raise her from the dead,” Carole said, and swallowed when Bella quietly closed in on her.

“How do you she isn’t?” Bella asked softly.

“Er—” She took a step back. Bella had come into better focus now. Inches away, in the dark, the outline of her face and lips softened and looked rather inviting.

Carole recovered quickly and cast her gaze downward. Now Bella’s luscious legs tempted her. “Well, she left town, didn’t she?” she posed. “Who knows where she ended up?”

“She could have come back.”

“That second festival could have been a welcome home party for Rose,” Bella said, “and every one afterward a celebration to remind the people of her vindication.”

“Doesn’t sound like the legends I’m used to hearing.”

“Of course not. Witches are always supposed to be wicked and friendless in fairy tales. The truth doesn’t necessarily enter into it, and nobody really cares why we have parties so long as they’re fun.”

Bella took her hand, and Carole thought her knees might give way. She trembled despite the warm night and wondered why. She wanted this, wanted something to happen at this ball, and Bella certainly fit the bill. Yet the sinister atmosphere surrounding them worried her. Whom had she known inside the hall to miss her now? Those two women who’d directed her outside probably hadn’t given her a second thought afterward.

“You up for some fun, Carole?” Bella asked, licking her lips. 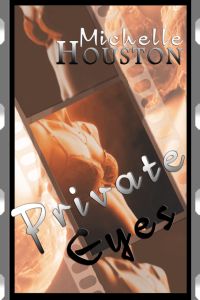