Cheryl Fisher is a virgin on a mission. She’s spent the better part of her life caring for her sick mother. On her death bed, her mother made her promise to live life to the fullest and to never take one moment for granted. In order to fulfill her promise, she goes in search of the two men she can trust with her body.

Noah and Drew have had their eyes on Cheryl for a while. Both men know they want to share her. When Noah learns the truth about her virginity, he’s shocked by the possessive feelings he has towards her.

Together, they must show Cheryl that there is more to them than their bad boy reputation. They want her with them forever, and they will do everything in their power to fight for her.

The Bad Boy's Biggest Mistake (MF)
Sam Crescent
In Shelf
$4.99
All Books In Cart
All Books In Bookshelf
Excerpt

“You look fucking beautiful, angel.”
She blushed and went to cover her tits. He moved the short distance and pulled her hands away from covering her body. “Never try to shield yourself from me.”
He palmed her breasts, watching her eyes dilate and her lips part as her breathing changed to pants.
“Do you like what I’m doing to you?” he asked. Out of the corner of his eye he saw Drew fucking his fist. It had been a while since they’d shared a woman together, and the raw need he felt for the woman in front of him was reflected in his friend.
“Yes,” she said in response to his question.
“Tell me to touch you.” Noah wanted to hear her demands from her lips.
“Touch me, Noah.” His name on her lips sounded heavenly to him. Going to his knees in front of her, he took the edge of the cotton panties she wore and pulled them down her legs. Her pussy was covered with trim red pubic hair, telling him she truly was a real redhead.
When he had her naked and gasping he would take off his leather pants. The need to have her begging him to fuck her was strong. She lifted her feet, and he threw her panties away before he stood in front of her once more. She was biting her lip, tilting her chin back as he pulled her lip from between her teeth. He then claimed her lips as he caressed down her body, testing the weight of her breasts in his hands, going down and tracing circles in the swell of her tummy, settling on her mound at the apex of her thighs. Sliding a finger between her slit, he felt her wetness instantly. She was dripping.
“You’re so wet,” he said watching her face heat from a delightful blush. He hadn’t seen a woman blush in years. “Open your thighs. I want to feel your cunt.”
Noah groaned and wished he could take the words away. He didn’t want to speak crudely to her, but it was who he was. She opened her thighs, giving him easier access. Running his finger down to her entrance, he inserted a finger inside her, feeling a barrier but not thinking much of it. She was tight, hot, and wet. Slipping in a second finger he heard her wince.
“Has it been a while since you’ve been with a man?” he asked.
She mumbled something, and he felt a thrill go right down his spine from the pleasure of knowing he would be her first man in a long time. Removing his hand, he pushed her to the edge of the bed while Drew moved closer, climbing onto the bed behind her. Noah spread her legs, kneeling on the floor in front of her. Her cunt leaking out her cream was one of the most erotic views he’d ever seen. Using his thumbs, he pulled her lips apart for him to see her swollen clit peeking out of its hood. She looked red, swollen, and good enough to eat. Noah swiped his tongue from her cunt all the way up to her clit, swirling round the nub and back down.
He heard her scream, and glancing up, he saw Drew had turned to her side and was tonguing her nipples. Noah could only imagine that the dual sensations of their tongues would be driving her crazy. This is why he loved sharing her with his best friend. He got to see his woman lose control while still being able to touch her. An extra set of hands and lips were much better than doing it all alone. Pressing both of his thumbs against her clit, he watched what Drew was doing to her.
Her gaze kept shifting from Drew to him and then back again, her eyes growing wider with every passing second.
“Do you like this, Cheryl?” Noah asked.
“Yes. Touch me more. Please. I need to be touched.”
He licked her pussy, running his fingers through her hair trying to enhance every pulse of sensation.
“Touch me, baby,” Drew said.
Noah glanced up to watch her wrap her small hand around Drew’s large cock. The end was wet from his cum. The excitement was obviously becoming too much for his friend. Smirking at the look of pain on Drew’s face, Noah went back to licking the nicest cream he’d ever tasted. 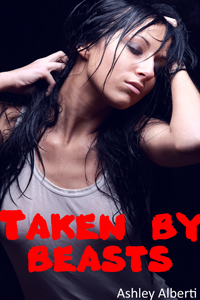 Claimed by the Alien Warrior: An Alien Mates Romance
Jayne Ripley
In Shelf
$2.99