Ten years earlier, Belle Hayden attempted to take her life and failed. For a decade, her body has lain in a hospital bed while her soul has sat in a classroom she remembered from a happier time. She remembers nothing of her past and only sees the unchanging moment. But that is about to change. Unbeknownst to her, she had been chosen to be given a happy-ever-after by the Fairy Godmother Union and they mean to give her one.

Jared Club, bounty hunter for the gods, along with his spiritual enhanced broadsword, Boudicca, have been given the task of getting Belle to move on. With the assistance of the head fairy godmother, Florence, Jared will have to find the slivers of Belle’s skull that contain the memories on the mortal plain while Boudicca, in her mortal spiritual form, will have to get the woman in limbo to accept who she was once.

Will Belle Hayden become who she once was or will she choose to let her body be as her memories are to her, dead? 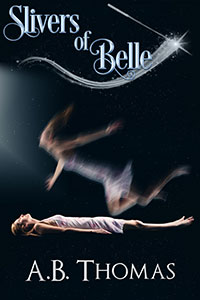 “Fuck a duck.” Jared Club quickly peeked in the classroom door’s small window before ducking and looking at the redhead standing next to him with her arms crossed. “I don’t think I can handle this looney.”

He risked another quick look through the window. She was sitting at a desk, but he figured that when she stood she would have been maybe five-foot-five on a good day. She had a thick headful of long brunette hair that had little curl or flair to it and seemed to hug the woman’s roundish face. He could tell that in life, she had not been comfortable with her heavier weight. She fidgeted, moving her arms slightly to block angles that showed the larger girth, and the oversized sweater had a hem that went past her ass almost like a mini skirt over the baggy jeans. She was pretty, but he doubted she thought so. “I mean, a fucking school classroom is her happy place?”

“Perhaps the next time you start flapping your lips you will consider who you are speaking to,” Boudicca said in her heavy Gaelic accent.

“Yeah, like it occurred to me that a fairy godmother could have triple D’s and an ass you could bounce a quarter off of,” he countered defensively.

“Let’s just get this over with so we can get on with those who would do wrong,” she stated. “Who is this again?”

A papyrus appeared in his hand. He opened it up and scanned the words written on it. “Chick’s mortal name is Belle Angelica Hayden. She’s twenty-eight on the mortal plane. She’s been here in purgatory for the past ten years.” He began to roll the papyrus up.

With a sigh, Jared unfurled the papyrus and read aloud further.

“She tried to kill herself and failed. Her physical form has been in a coma for the past decade and rather than coming to terms with her decisions, she has chosen to refuse to examine the results.” He looked up from the papyrus. “What the fuck are we supposed to do?”

“You two are her guides, you need to help her accept who she was so she can choose who she will become,” a sharp shrill voice offered. “It shouldn’t be that difficult for you since your positions are to bring those to justice whose behaviours have led to poor choices.”

The two snapped their attention to the voice. A woman stood a few feet farther down the hall from them. Though she was not a tall woman, perhaps four foot and a half at the most, the sternness etched in her face exuded a far more imposing aura than her size. She wore a light blue gown that shimmered over the curves of her rotund body. The greyness of her hair balled tightly into a bun on the top of her head matched the colour of her eyes as she glared at Jared and Boudicca from behind a set of horned rimmed reading glasses. A set of translucent wings at her back fluttered back and forth like the tail of a rattlesnake about to strike. They both recognized her as the chair of the fairy godmother department, Miss Florence.

“Okay. I repeat, what the fuck is that supposed to mean?” Jared asked again.

“You don’t know?” the chair said with a mocking helpless tone while she placed her hand, palm up, on her forehead. “But this job is so easy. A big man like you should be able to pull all the answers out of your ass.”

He stared back at the woman with his mouth open for a minute. He was assigned this duty because of one comment? A misconstrued comment, he amended in his mind. He massaged his right temple with his thumb.

“I got that we have to get her to see the truth about who she was,” he drawled, “but I don’t see how I—we can do it. I mean, I’m just a guy. Sure, I can go back and forth between here and the mortal plane, but I can’t enter all the introspective mumbo jumbo. Boudicca can enter the dream state, but she loses her human form and becomes a sword when she enters the mortal plane.”

“Mister Club, you brought this upon yourself. The principle of the heavens is that there are no unimportant positions and every being has the right to be valued,” she clucked curtly. “It is the hope that your minuscule mortal mind can see that there are no easy jobs, just skilled beings executing them.” She let out a haughty sniff. “This should be overly apparent as it will take the two of you to accomplish this task, while it will take only one fairy godmother to do yours.”

The blank stare from him seemed to make the head fairy godmother’s eyes go a shade darker.

“She is broken, psychologically and physically. There are pieces of her memory that attached to several pieces of her skull, which are embedded in the bodies of others.” She looked at Boudicca. “You are to assist her in regaining the understanding of the images attached to those slivers.” She glared at Jared. “You will be extracting those slivers.”

“Wait a minute, that sucks,” Boudicca said angrily. “Why do I have to do the touchy feely shit while the person who fucked up gets all the fun in killing and yanking pieces of skull out of the corpses?”

His to Protect (Black Hills Wolves #63)
Paris Brandon
In Shelf
$2.99
Tweets by
sirenbookstrand