When last we left that unlikely pair of alien slayers, part-Felig Nate Lowe and fully human Tina Cain in The Felig Chronicles, they’d finally declared their mutual love and lust in spite of the extraterrestrial Felig’s efforts to kill them and enslave Earth. In The Felig Chronicles 2: Something Else Wicked, in addition to the Felig, why does a human element want them dead, too?

Tina felt heat pouring out of Nate. His temperature was spiking, evident in the warmth seeping through her robe where he held her. His speech was slow and deliberate and the timbre, deep. This was no joke.

“I promise. I promise. Just don’t cook me. Kiss me instead. Long, hard and wet.”

“That sounds very rude. But I like it.” Nate wrapped her in his arms and fulfilled her wish. Tina was breathless after the lip lock.

“Whoa! What a tongue! To think I hated kissing not all that long ago. By the by…” She disengaged herself, got up, shed her robe to reveal a red bikini underwear set, then draped herself across the bed. Propping herself up on an elbow, she beckoned to him. “Get over here. Protect me.” Nate obliged by embracing her tightly and frenching her slowly again. When they came up for air, Tina squeaked out, “Forty!”

“Forty what, T?” Nate asked as he arranged her onto her back. He unhooked the front of her bra, settled over her breasts, and suckled the nipples into firm chocolate points.

“I’ll be forty years old next month. Ah!” Just then, Nate’s wings unfurled. He beat them softly to cool them both down and inched lower to nuzzle her stomach while his nimble fingers changed places with his tongue on her breasts. “If I make it.” 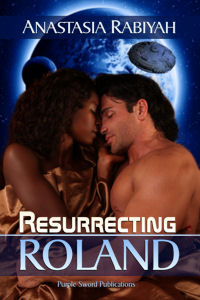