Rowan O’Herley figures the old tavern bequeathed to her by her uncle is a chance at a fresh start. When otherworldly presences begin to make themselves known, she soon realizes she inherited much more than just a 200 year old building.

Luke Meunier holds a tragic past close to his chest. When he sees Rowan O’Herley for the first time, he’s drawn to her but can’t bear the thought of getting close. He’s determined to erect a wall between them, but when he realizes she may be in the very same danger that killed her uncle, he can’t help but get involved. 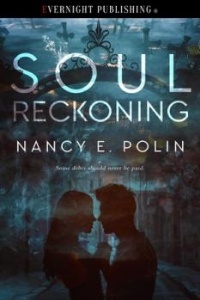 Rowan wove around a few more people before she was able to pull the heavy door open and slide out the front. Sidestepping to avoid getting smacked at the entry, she leaned near the narrow block wall of glass and tried to rein herself in.

Her heart pounded in her temples, blood rushing heavy and hot. Sweat coated her face and trickled down the small of her back. Night air dropping into the low sixties rushed in, but relief was slow, achingly slow.

“What’s the matter with me?” she murmured, the words not even reaching her through primal senses gone awry. Luke had her twisted around and baffled, and it shouldn’t have even been an issue. The man was rude, aloof, damaged, and couldn’t even stand her. Why did a simple dance throw her into such a tangled mess?

In that moment, she wished she hadn’t come to Louisiana. She should have sold the damned tavern instead of hauling herself almost 2000 miles to deal with an asshole employee and a haunted bar.

The jury was still out on that one. Her logical brain continued to vie for a reasonable explanation, sure it could be found.

Her emotions told her another story, but she endeavored to squash it.

Closing her eyes, she pressed her hand to her forehead, expecting it would be pulsing under her fingertips, relieved when it wasn’t. Tomorrow she would call her parents. Just to check in, hear their voices, even if her mother annoyed her.

Rowan nodded and good manners stifled the urge to tell the Samaritan to go away and be concerned about someone else.

“Sure? You look a little pale.”

She cracked her eyes open, any words lost in a gasp. Jerking backward, she flattened her body against the block glass, inadvertently smacking the back of her head. A spin of dizziness chased a few painful sparkles around her until she blinked it away.

The green-eyed man stood less than three feet from her. He tilted his head and smiled. “Ah, you’re a difficult one, oui?”

“An acquaintance of your uncle’s.” He slid one foot forward and his face filled her vision. “His death was very unfortunate for me, but then voilà! Here you are. It’s important for family to take care of family, do you not think so?”

“I don’t know what the hell you’re talking about.” Rowan kept her voice from shaking and considered it a small victory. Her next victory would be kneeing him in the balls, if at all possible, but her body felt too heavy, too ineffectual. “What do you want from me?”

“I guess this is all very confusing for you, but it doesn’t matter. I’ll make it simple.” He leaned in and she thought she could smell smoke on his breath. “Your uncle owed me. I lost him, so the debt is yours.”

The man opened his mouth and laughed. “Well, that’s unfortunate, but there are other ways to pay a debt—”

She swiveled her head to find Justin popping out the front door, goggling at her, and the man who should have still been in her periphery, gone. Nauseated, Rowan bent from the waist and rested her palms on her knees. “Did you see anyone?” Her voice sounded unfamiliar to her own ears, wispy, weak, strength gone.

And it pissed her off.

His brow crinkled, pink rising from his neck. “Um … well, I think a few people may have left.”

“You didn’t see the guy that was standing here a second ago?” She looked up at him, concentrating on her breathing. Slow and steady.

He opened his mouth and closed it again, befuddled.

“Never mind.” Straightening, she pushed past him on shaky legs and slid back into the throngs of people. The warmth of the tavern settled around her and for the first time, she took comfort from it.