Who’s ready for some manly games?

Love a spot of sweaty, athletic action? Then this collection of short stories will definitely get your blood pumping. From brand new players to experienced hands, these sporty lads are ready and eager to bring their manly games to a rousing finish…and maybe even find some unexpected romance along the way. 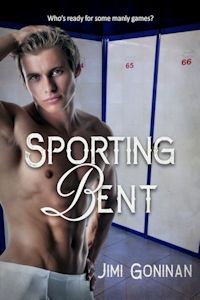 Finn Michaels’ fingertips brushed against the smooth blue wall, as he spun around in the water and shot off into his last lap of the day. Even though he was gliding through the water with the practiced ease of a long-time swimmer, Finn was feeling a tad weary. This was mostly due to the remnants of a hangover from the birthday drinks he’d attended the previous evening for his best friend, Sophie Malone, a vivacious, curvy blonde with a wicked laugh.

Those damn Fuzzy Nipples get me every time. Why do I always give in to Sophie? She really is the devil on my shoulder. Not that I ever need much encouragement.

Finishing the lap, Finn ducked under the red rope separating the lanes to get to the steps at the left-hand side of the rooftop pool. Climbing out, he made his way over to where he’d left his large, royal blue towel and collapsed down onto the wooden bench for a brief rest. Gazing out at the cityscape, Finn let his mind wander as the strong June sun beat down upon his already well-tanned body.

Swimming had been a part of Finn’s life for as long as he could remember. Indeed, there was many a home video of him happily splashing about in the family’s backyard pool before he could even walk. His passion had continued throughout his teenage years, where Finn’s natural ability saw him win several championships with his high school squad. In the decade since Finn had left high school, however, it had ceased to be about competition and now he swam for pleasure and exercise. He relished the sense of peace, losing himself in the steady, rhythmic movements as the water flowed around him, calming his mind into a state of pleasant tranquility.

Nowadays, Finn’s preferred venue for his watery pastime was the Pratchett Aquatic Center, where he’d been coming for the past few years. It was located only two blocks away from his law office, so he was usually able to squeeze in a swim during his lunch hour if his workload wasn’t too heavy. Normally, he managed two or three sessions a week, which he alternated with workouts at the equally nearby gym, Sweat Station. Combined, his exercise regime had nicely honed his physique into one that drew many an appreciative glance from his fellow swimmers and gym patrons alike.

As well as being close to his office, the aquatic center offered a number of pleasing amenities for Finn. The rooftop pool had a stunning 360° view of the city and downstairs there were two Olympic-sized indoor pools with a sizeable children’s water-playground off to the side, which kept the littl’uns out of the path of the more serious swimmers. Attached to the bright and airy change rooms were large, segregated dry saunas and steam rooms, which Finn often took advantage of after his swim.

Due to its close proximity to the city’s main gayborhood, the center also attracted a fair number of sporty gentlemen of a certain persuasion, ensuring that there was generally a great deal of eye-fucking that went on poolside. Unsurprisingly, this was often consummated afterwards in the men’s steam room, as Finn knew well from experience.