Talk Dirty to Me

Adam's never called a gay phone sex line before, but he finally takes the plunge. Casey is more than happy to fulfill Adam's phone fantasies, but it's not long before he wants more than talk. When they meet, will it be as good as Adam's fantasy? 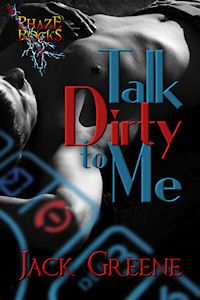 Talk Dirty to Me

He could have gone out, possibly picked up someone, or even called his sort-of ex-girlfriend. They’d broken up months ago, but still slept together once in a while. It was too much trouble, and not really what he wanted.

He’d never confided in anyone. He’d tried to rid himself of his unusual feelings by sleeping with women, but the thoughts never really went away. It had scared him at first, but eventually he’d come to accept the fact that he was attracted to guys. He still liked girls, but he couldn’t deny that boys always held a greater interest for him.

He didn’t know what to do. If he knew any gay guys well enough to confide in, maybe something could happen. Or at least he could go to a gay bar with them. The prospect of walking into a bar by himself was nothing short of terrifying. He couldn’t do it. He wasn’t usually an outgoing guy, but in a situation where he had no knowledge and no experience? No way.

So he was screwed, no pun intended. He was destined to live his life longing for something he could never have.

He knew nothing about how to find what he wanted. He knew the mechanics, of course; well, as much as one could find on the Internet, anyway. He worked as a lawyer, but performed mostly research for the firm. He doubted he'd perform well at a trial, and his firm handled mostly contracts, anyway. He excelled in thoroughly looking at every angle of an issue to make sure they’d covered every base, and drafting contracts so tight no one could contest it. At least, not successfully.

Some days he’d stare at himself in the mirror, wondering if he’d ever be attractive to another man. He was tall and slim, but not skinny. As a naturally scrawny guy, he had to work out almost every day. He took pride in his arms, in particular. He thought they looked pretty good: cut without being overdone. Not that he ever got to show them off. The uniform of his office had to be sedate blue or black suits. Even pinstripe could be considered slightly radical.

He had dark brown, thick hair which tended to curl if he didn’t keep it trimmed. He did, of course, because if pinstripes were too wild for the office, then hair anywhere near his neck was definitely out of the question. His eyes, a clear blue, were possibly his best feature, after his arms.

He didn’t often gaze at himself, though. He knew he was nothing special, and it didn’t matter anyway. He’d never have the guts to go after what he really wanted.

He tried not to dwell; he had a good job, a nice apartment and car, and a few good friends. He had his health and his parents back in Colorado were still well, if only preoccupied by his sister who’d just given birth to her second child. He mentally thanked her for taking the pressure off of him to breed.

If he kept busy, he could almost forget the longing he felt when he’d see a particularly pretty man. He knew his type: slim, small, feminine, yet obviously male. He liked dark hair and dark eyes, maybe slightly exotic.