The Best Of Sommer Marsden

Stories include a supernatural spurred ménage, a captivating Dom who takes control at a crowded house party, an irresistible alpha who makes recycling kind to the body and the planet. A husband encouraging his wife to take advantage of a girl crush and a woman who can’t help but lose herself between two of her two best friends in a night of passion. A curvaceous woman gets stuck in her boot—that’s right, just one—before an important interview with a handsome applicant and a public spanking makes a young woman reconsider the disposable nature of her rebound guy.

Find out why Sommer Marsden’s been called “…one of the top storytellers in the erotica genre” (Violet Blue), “Unapologetic” (Alison Tyler) and “…the whirling dervish of erotica” (Craig J. Sorensen). It’s all right here in this collection. All you have to do is step inside. 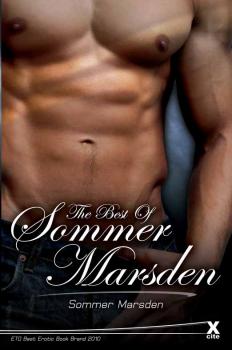 The Best Of Sommer Marsden

She was rushing past the cottage two doors up from hers when she heard, ‘Hey there Little Red Ryder Hood ...’ and froze.

The deep baritone with accompanying backup slammed her back ten years. The hair on Ryder’s neck rose up in a ghostly wave of fine blonde down and she spun, feeling off kilter already. Her eyes sought but could not find the singer, until she heard a deep chuckle that slammed her in the belly like a cotton-wrapped fist.

There was no way. She had not seen them in nearly a year. No way at all, and yet she knew it now. Could feel it in her bones, that heavy knowing that mimicked the feeling she got after recovering from a long illness like flu or a drawn-out bout with a fever. A deep-seated awareness came over her.

The song that was being hummed somewhere in the trees sealed the deal. It was the boys out there. Ryder stomped her foot. ‘Hubert Sullivan Usher! Joseph Michael Palmer! Come out this instant!’

And then she waited. Was she crazy?

No. They stepped into the clearing, one tall and dark and gruff like a bear in a man suit. The other long and lean and ethereal. Ice blue eyes and pale blond hair. The boys.

They had been friends all through college. Inseparable – the three of them. Friends, only, no funny business. But for that one night.

‘So no man yet? No marriage, no kiddies, no picket fences? It’s been nearly a year, woman,’ Hubie said. His deep voice was like a warm hand sliding up her neck and in the orange glow of the fire pit Ryder shivered.

‘Nope. I have a thriving jewellery business. I have books, friends, good wine, nights out, invoices and paycheques.’ She grinned. ‘But none of that.’

Joe smiled, his eyes somehow surreal in the glowing flash of heated light. ‘Hubie doesn’t either, so don’t listen to him. Nor do I.’

He said the last in that prissy, proper way that made him so endearing to her. She loved his almost stuck-up, uptight ways. But in Joe was a heart of gold and an old soul.

But she let that memory drift away on a curl of wood smoke. She couldn’t go there. It had been one night a long, long time ago. Her 20th birthday. It had happened – just happened – after her drunken salute to herself and their youth. Her long monologue about their love for each other and how it would still fade, because nothing lasted for ever. It would fade and so would their youth. They were only going to be young once, only going to love each other this fiercely once. And how special were they that they had found each other. Three kindred spirits, friends, almost family but something more. She had let all the muzzy-headed words tumble out and then she had toasted herself and then them.

And then the boys had taken her. No one discussed it. It had just happened. A mix and turn and shift of three bodies. A mélange of forms and naked parts and soft words and cries. Orgasms and skin on skin and laughter and, at the end, a satiated peace and sleep.

The morning brought reality and no one had ever mentioned it again.

Ryder shook her head and tried to draw back the words that had come before the end of his sentence. She couldn’t. ‘I’m sorry. I spaced out on that. What?’

Hubie grinned, and cocked his head as if he had been tiptoeing through her mind. Reliving that night so long ago with her. ‘I said, Ryder the daydreamer, your jewellery, who are you selling it to?’

‘Oh! Tourists and some local new channels have been purchasing. Which is great, because then it ends up on TV and in the credits. And some local boutiques.’

‘What were you thinking?’ Joe said softly, grinning, poking the embers with a stick as he tapped his toe in the sand around the fire pit. His big foot was sheathed in his normal boat shoes, his khaki shorts knee length, his button-down shirt rolled and pushed to his elbows. Normal Joe – preppy chic.

‘I was thinking about the jewellery show I’m doing tomorrow. How I should head off to my cabin and go to bed. I was thinking that this beer sucks ass,’ she lied, taking the final swig.

‘You were thinking about us,’ Joe said, calling her bluff.

‘Never,’ she said, trying to tease with her tone.

Ryder steadfastly refused to cave. It was that one time – a lifetime ago. No reason to even think about it.

At one point they were in you at the same time. You never thought that sweet full pressure could make you come, but it did. You straddled Hubie and drove yourself down on him over and over; he held your hands to his chest so you could feel his heart. All the while Joe rocked into your bottom, slipping into you on a cool river of lube. Working your ass, brushing your g-spot from a totally new angle. His hands on your hips, holding you so you didn’t float away, or so it felt. Both of them. Holding you. You’ve never felt so safe.

‘... fishing,’ Joe said. His smile was ornery, knowing and smart-assed.

Ryder swallowed hard. Once they had been her very best friends. And for that one night they had been her lovers. Something she’d never been good at with Hubie and Joe was lying. She cleared her throat and steeled her nerves to admit it. ‘What? I missed that.’

Joe laughed softly, drawing a heart in the sand with the stick he held. The tip was charred from him poking it into the fire every few moments. He drank the last of his beer and said. ‘We are here on a boys’ weekend. Haven’t gotten together for months. Figured we’d come down for some fishing.’

‘Oh,’ she said and set her empty bottle on the ground.

‘Yes, oh,’ Hubie said and his voice was a little gruff. A bit clogged sounding. His eyes seemed to stroke her like a hand in the firelight – over her breasts, her belly, her legs in her denim shorts and flip-flops. Ryder wanted to eye up his jeans to see if he had a hard-on but she refused. She kept her eyes above his belt. Joe’s too.

‘I’d better go to bed. I have to get up early. Vendors need to arrive at seven sharp. Doors open at nine.’

She kissed them each chastely, hugged them too. She pretended not to notice Joe’s hard cock brushing her thigh when he pulled her into the embrace. She hurried through the woods to her dark cabin and resolved to put it out of her mind.

For two hours she lay there, not thinking. Deliberately not thinking. When every decadent sinful image drifted into her mind, she resolutely pushed it aside. At midnight, she got up and poured a glass of wine. At 12.15 a.m., she considered it and at 12.16 a.m. she banished the thought. At 12.30 a.m. she knocked on their cabin door.

It was Hubie who answered. His dark hair in a tangle and his chin sprouted with dark stubble that clouded his tanned skin with shadow. ‘Well, look what the cat dragged in,’ he said softly and swung the door wide for her to enter.

Ryder still wore her white nightgown. She had tossed a grey cardigan over it and her feet were bare, and now dirty, from the beaten path from her cabin to theirs. ‘Were you sleeping? Did I wake you?

‘Hell, no, woman. We’re watching some dumb-ass movie on cable and drinking beer.’

‘What movie?’ she asked dumbly.

‘Shit if I know.’ He touched her lower lip and Ryder felt her pussy go liquid and soft. A fierce surge of lust swelled in her chest and she breathed out like he’d squeezed her too hard.

She turned to see Joe and, when she did, her heart raced at his pale good looks. A smile lit his face and she realised that she still loved them. After all these years. Loved who they were, what they had meant to her once and what they still meant to her now. ‘Little Red Ryder Hood,’ Joe whispered and crossed his arms over his chest.

‘I ...’ Ryder lost her words then. It hadn’t taken long to feel that old familiar belonging with them. Something she had rarely experienced thus far in her adult life. She loved her life and her business, but she was missing the rush of real life. The visceral reaction to love and lust and fucking. She didn’t have time.

‘You what?’ Joe asked, cocking an eyebrow.

‘I want it back,’ she sighed. She blew all the words out on a rush of air. She was so eager for them to hear her that she rushed it out of her mouth in a tumble of soft speech. ‘I want it back. I want that night back. That feeling – you two. I want one more night.’

Then she waited. Her heart pounding like some tribal drum, her throat shaking with the force of it, her stomach dipping almost sickly from nerves. Joe turned on his heels and Hubie took her hand.

What did it mean?

‘Come on, Ry,’ Hubie said and tugged her gently.

‘We thought you’d never come to your senses,’ Joe said over his shoulder and her whole body seemed to relax.

It would be OK.

In the living room it was Joe who pulled her in for a hug. Engulfing her in his strong but lean arms while Hubie – his best friend in the world – closed in behind her. His broad chest pressed to her back, his cock pressing the small of her back. Joe kissed her, hands in her hair, his hard-on pressed to the cleft of her sex through the thin nightgown.

‘I just want it back for one more night,’ she said again.

‘We can do that,’ Hubie said, pressing his lips to her shoulder, her neck, the crown of her head. His kisses rained down along her back and his hands pushed up her nightie as she shivered like she was cold.

‘No problem,’ Joe said, pushing at the nightie too. Together they got off her cardigan, her nightgown, her panties. She worried briefly, stupidly, about her dirty feet but the thought drifted away as Joe’s tongue touched hers and Hubie’s fingers came from behind and started slow, lazy circles on her clit.