With his sun-streaked blonde hair, ocean blue eyes, and sinewy muscles, maverick Jack Van Buren has spent his twenties living the playboy life that comes along with being handsome and the heir to a billion dollar business empire. But when Jack resolves that he wants more out of life that dating the latest reality TV starlet, he decides what he yearns for most is a child to raise. The only catch is that he’s not ready to settle down with one woman yet.

Bianca Forrester is an independent-minded medical student with fiery red hair to match her personality who dreams of one day tending to the health of the less fortunate. Bianca’s determined that she doesn’t want high student loan debt to dictate where she works and who she treats one day. When she decides to become the surrogate mother for Jack Van Buren’s child to finance her education, Bianca’s confident that she can give him the most important gift of all…the love of a child…and then move on with her life.

But when both Jack and Bianca begin to realize that they would pick each other if they were to enter a long-term relationship, can the two of them ignore the growing sparks they feel and the child on its way to keep things between them “just business?” 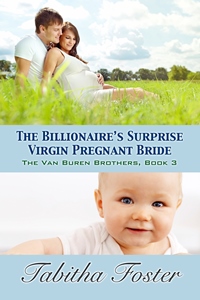