Princess Dsanna is young and beautiful, and just a little spoiled, but when her ailing father plans to marry her off to a neighboring prince—who will take the kingdom by force if she refuses, she is forced to grow up in a hurry.

She and her sacred white cheetah, Kiboli flee to the sanctuary of the Star Mountains, where she meets her destiny and true love, Prince Arshane, who was believed by all to have been murdered by his brother in childhood.

As Dsanna journeys across her kingdom and meets her subjects, she grows in maturity and compassion. A royal wedding, sprung with a surprise, unites the young lovers, and the kingdom as well. 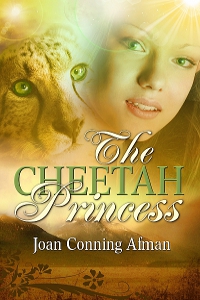 “I won’t do it. You can’t force me to marry someone I don’t know and don’t love.” Princess Dsanna would have stomped her foot if she hadn’t been reclining on a large, red satin pillow on her royal divan. As it was, her tone aroused Kiboli, her sacred white cheetah, who mewed in sympathy and rubbed his elegant spotted head against her thigh.

“My darling, I’m afraid it is a necessity.” King Gruntav leaned down toward her, but was forced to fight off a fit of coughing before he could continue.

Lord Rykard, the king’s chief advisor, adjusted the tapestry bolsters behind the king’s back. “Your father is very ill, Your Highness.” His tone held the slightest hint of recrimination. “Are you comfortable, Sire?”

Of late, the king sat uneasily on his ornate throne. Rykard had finally persuaded him to preside from a specially-made padded chair. There was a shining teak table and matching chairs at his right hand for his chief advisors to sit, but only Lords Rykard and Mojan graced them at the moment. The king nodded, his lined face pale.

Dsanna glanced up at him, then at Rykard, concerned. “Wouldn’t the trip to the ocean we had planned for my eighteenth birthday be helpful to him? The air, the water, the sunshine—I should think it would all be beneficial.”

She caught Rykard’s gaze of undisguised affection. The handsome noble sighed. “Would that we could do that for him, but His Majesty could not travel right now—”

The king took Dsanna’s hand. “I am dying, my love. There is no use pretending I will ever be well again.”

She shook her head. “You can’t be that sick. You’re not that old, and I’m too young to get married and rule a kingdom.”

The older, not so handsome, Lord Mojan, stirred restlessly in his chair and cleared his throat loudly, as if to make a point. Short and lumpy with a caramel colored beard, his voice boomed out with surprising strength. “Some promises simply cannot be kept, Princess. Your father may not live much longer.” He glanced at Rykard for confirmation.

The chief advisor rubbed his gray beard, nodded and turned again to Dsanna. “I am afraid that this marriage is necessary to secure the kingdom before his death.” She heard the regret in his voice.

She tossed her head, causing her black hair to swish around her shoulders like a silk curtain. “I refuse to believe my father is that sick.” She fought for control, but her voice wavered. “He’s always been the healthiest man I know.”

She laid her hand on his knee and gazed up at him. He returned her smile, but even that small effort resulted in another fit of coughing.

“Look at Prince Vadent’s portrait,” Mojan coaxed. He thrust the miniature painting toward her. She jerked her head away, refusing even to glance at it.

She favored him with a glance, then, granting him a boon, turned her head slightly and looked at the portrait from the corner of one eye. “Oh, he is handsome.”

She took the portrait from Mojan in order to examine it closer. The small painting showed a face almost perfect in its rugged symmetry. Fair hair curled over a broad forehead and around his ears. His eyes were blue and seemed to sparkle with a hint of mischief. He had a straight, noble nose and his brooding lips held just the tease of a smile.

Mojan smiled at her. “A wedding and a kingdom are much better birthday gifts than a trip to the ocean. Maybe Prince Vadent will take you to the seashore on your honeymoon. Yes, I am almost sure he will.”

She smiled in spite of herself. “Do you think I can’t recognize that statement for what it is, Mojan?”

“Let’s not insult her intelligence.” Rykard had a warning edge to his voice.

It was no secret to Dsanna and everyone else that he and Mojan had political as well as personal differences.

Her father laid a wrinkled brown hand on her shoulder. “Dsanna, we adore you.” His voice, filled with love, held a hint of hardness. “You are beautiful and intelligent and kind—”

Mojan pursed his lips and looked away. “When the spirit moves her.”

Rykard threw him a withering look.

The king bent closer and slid his arm around her shoulder. “But I am afraid we have rather spoiled you. There are times in life when you cannot just think of yourself and what you want.”

She raised her eyebrows. “Why not? I am a princess, am I not? Why can’t I choose the direction of my own life and marry the man of my choice?”

“Is there a man of your choice?”

Lord Rykard’s gentleness moved her, but she responded with alacrity. “No, of course not. I am not even eighteen yet. How could I have met him? I’ve never been anywhere. My whole life has been lessons with the Ancients, princess-in-training, as you all call it.”

“Stand tall, Dsanna. Remember you are a princess,” she mimicked the raspy tones of the old women who had raised her in lieu of the mother she’d never had. “Wave very slightly with the right hand. Smile, smile, smile. Keep your tone kind even to the least of your constituents—”

“Yes, yes,” her father interrupted with a short half-laugh. “Then you know what your obligations are.” He paused to clear his throat and coughed again. “The time has come for you to take the leadership of the kingdom, along with a suitable husband. I deem Prince Vadent most suitable.”

She opened her mouth to object, but her father shook his head and continued, “The time has come to level with you, Dsanna.”

A Little Bit of Heaven (MMM)
Stormy Glenn
In Shelf
$3.99
Tweets by
sirenbookstrand