Missy Donovan has the kind of life many women only dream of having - being a stay at home mom, watching her teenage daughter Kayla grow into a great dancer, and getting to go out with her husband of sixteen years, TJ. But not everything is as it seems, when Missy discovers her husband has a secret burning desire - for black women. Missy thinks it will help her husband get it out of his system, when she agrees to setup TJ with an escort to go to dinner with him. But she has no idea what she's set in motion when she contacts her best friend to arrange a date for him through her escort service.

Cocoa Jefferson has her own set of problems. She's unemployed, laid off from her job as a school teacher, and doing her best to find teaching work. But the best she can do so far is to become an escort with The Jessica Barbour Agency, where her chocolate beauty is available to the discriminating gentleman - for the right price. She has no problems with hanging on the arm of a white man, because she secretly loves white men. But Cocoa, twisted up in knots because of guilt, won't whisper any of this to anyone, especially not to her black husband. She just does the job. So when she gets the plum assignment of accompanying TJ Donovan to an afternoon of dinner and drinks at Giorgio's, she treats it as one more job. But sparks fly when Cocoa meets the handsome TJ Donovan. Sexual sparks.

Missy thinks getting what he wants will get black women out of her husband's fantasies. Cocoa just wants to get through this situation with her morals intact. But will either woman get what she wants? 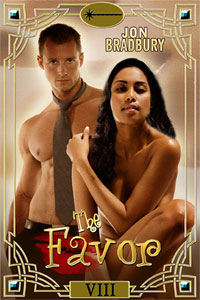 I sat down and moved the mouse. The screen saver cleared.

My husband hadn't minimized the browser window for his email inbox, but that was because he had been too busy watching me suck his dick to pay attention to what was on the screen. I'm not one to snoop, but it was impossible not to look at his emails, most of which were safe, like the daily weather forecast, and the daily news summary.

However, there was also an email from Jillian Rae, with a subject line that made me want to run outside, drag my husband back in here, and make him explain himself. Only the subject line of the email was visible. But it told me all I wanted to know.

My husband was fortunate in that he had long since left for the train station. In fact, he was probably halfway to work by now. Me running outside to drag his butt back inside would only make him late for the train. Then he would have no choice but to drive to work, in Monday morning rush hour traffic, and that never failed to make him cranky.

My blood boiled anyway, as if a fire had been lit under the chair. Then I made myself stop and think. I reminded myself that she had said she knew him from work. So that's probably all this was, something work-related. Or maybe it was something else just as simple, like asking if we had enjoyed the show the other night.

She obviously had his private email address. That didn't sit well with me.

Surrendering to the Right Man
a.c. Mason
In Shelf
$4.99

It's a Jungle Out There
Stephanie Williams
In Shelf
$2.99
Tweets by
sirenbookstrand